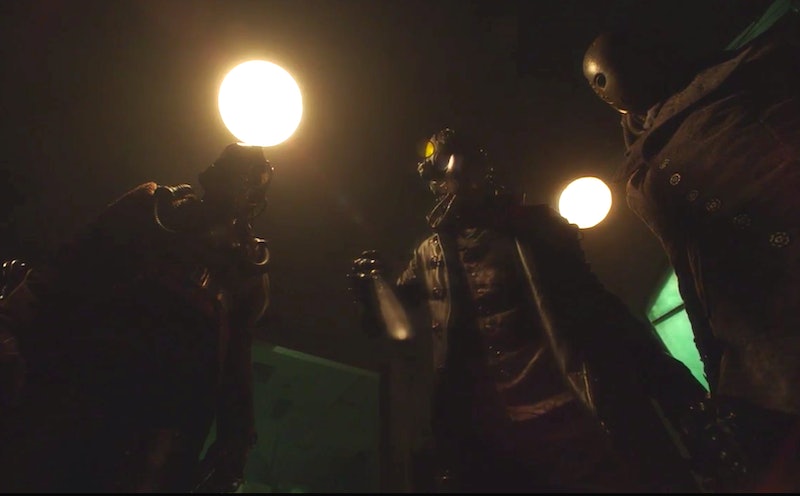 We know absolutely nothing about these guys and yet they're already creeping me out. Part one of the Teen Wolf Season 5 premiere introduced The Doctors, the big bad villains of this season. Thanks to them, everything we've been hearing from the cast and crew about this season seems right on the money: It's looking to be the scariest, darkest, and goriest season yet. The Doctors have seemingly come out of nowhere, and at the moment their purpose in Beacon Hills seems to be a mystery.... Or is it? The first episode may have already given a us a hint into their plans, and it doesn't sound good for Scott and his pack if the hint is true.

Halfway through the season premiere, when Kira is still sitting in the middle of a traffic jam on their way back from New York City, her parents decide to use the pile-up on the highway as a teaching lesson. Kira's mother tells her about the myth of the Wild Hunt. She says that it was a night much like the one they were facing — thunder and lightning on a dark night. The story goes like this: "In storm clouds just like these, phantom hunters would appear riding black horses and blood red eyes." These riders would have wolves and hounds at their side to help with the hunt. When Kira asks what they were hunting, her mother replies creepily: "Souls."

Clearly we're supposed to take something away from this, because if we've learned anything from four seasons of Teen Wolf, it's that every myth, every story, every legend, and every anecdote ever told on the show is useful later on down the road. And in this case, the road may be closer than we think. The Wild Hunt myth that Kira's mother tells her actually seems to be based on the Norse myth of the same name. The Doctors sound a lot like the phantom hunters, if you think about what we've seen so far in the first episode. Blood red eyes? We can see that at least one of the doctors has red lenses in his helmet, the one who looks straight at the mysterious wolf with electric blue claws who attacks Scott.

The Doctors also have wolves at their side to help with the hunt, if you consider the electric claw werewolf who was desperate for more power and begged for mercy when he couldn't "remove the obstacle" that was the True Alpha Scott McCall. And what's more, that same wolf told Scott he didn't just want to "claim his status," he seemed to want to see what Scott was made of as a True Alpha. And when he stabbed Scott with his claws, he seemed to be drawing power from Scott's body. Was he trying to take his Scott's inner power, the thing that made him worthy of being a True Alpha? His "soul" for all intents and purposes? If so, it would make sense with the myth since he was on The Doctors' roster.

Then there's the way in which the werewolf died by the Doctors' sword. After he was stabbed, his chest opened up and out flew several ravens. (Side note: What is with black birds this year, first True Detective and now Teen Wolf?) From what we know about ravens and black carrion birds, they symbolize darkness, death and bad omens. Perhaps when the Doctors stabbed the werewolf in the chest, the ravens that flew out symbolize that wolf's bad, dark soul. Everything on Teen Wolf, especially this season, seems to have a deeper meaning and I can't help but think that the Doctors are a more formidable enemy than we've ever seen. I'm genuinely worried and surprised for our beloved pack.