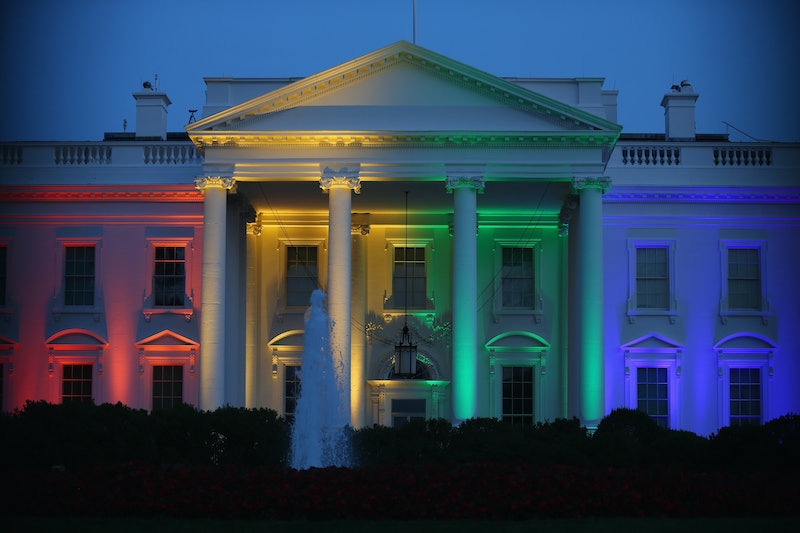 Mike Huckabee is at it again. During a Sunday visit with George Stephanopoulos on ABC's This Week, the former Arkansas governor expressed his disgust with President Obama's decision to light up the White House in rainbow colors following the historic gay marriage ruling passed down by the Supreme Court on Friday. An irritated Huckabee indicated that, if elected president, he would set a very different standard over on 1600 Pennsylvania Avenue.

The president lit up the White House the other night with rainbow colors — I guess that’s his prerogative. If I become president, I just want to remind people … please don’t complain if I were to put a Nativity scene out during Christmas, and say, "You know, if it's my house I get to do with it what I wish despite what other people around the country may feel about it."

Huckabee seemed to have conveniently forgotten that the Obama White House has, in fact, displayed a large nativity scene during the holiday season before (with which no one seemed to take any issue), and has delivered statements each year in celebration of the Christian holiday, in the tradition of those leaders who have gone before him.

The rainbow-hued White House wasn't the only thing eating away at Huckabee either. Speaking on the call by South Carolina officials, including Gov. Nikki Haley, to remove the Confederate flag from statehouse grounds following the tragic mass shooting in Charleston just weeks ago, Huckabee praised the work of his fellow Republicans, completely dismissing the work of activists who had been pushing for the very same thing. He also conveniently skipped the fact that the state's only Democratic federal representative had petitioned strongly for the removal of the flag as well.

"I think it's important to note — and I know this will cause a lot of angst — but it was Republicans who stepped up and made this happen," said Huckabee.

Of course, Huckabee is in full campaign mode and his divisive choice of words on both accounts isn't surprising. Sitting even with Marco Rubio at around 10 percent, according to a recent Public Policy Poll, Huckabee likely believes he must commit to a more aggressive offensive against liberal Democrats and social moderates if he's looking to gain even more ground on his opponents, even if it means puffing himself up with seemingly hypocritical flip-flopping.

For the most part, Huckabee stuck to that game plan on Sunday. Tearing into the Supreme Court Justices for establishing "marriage redefinition," the 2016 candidate insisted that the new ruling put religious businesses and churches in the way of a new brand of discrimination.

Huckabee added that religious groups and individuals of faith had no say in the decision, effectively being forced to choose to follow God or give up their beliefs in favor of equality. He suggested that, if elected president, he would not enforce the Supreme Court decision, but would "consider it," telling county clerks who didn't agree with homosexuality that they shouldn't have to issue marriage licenses to same-sex couples.

Here's where Huckabee is wrong. In validating the rights of LGBTQ couples to legally wed, the Supreme Court didn't open the door to a new form of biased treatment, as the Arkansas native proposed. Rather, it closed the door on an ugly chapter of federally-approved discriminatory practices and put the onus on the public to decide for itself whether it truly wanted a revolution of social construct.

Huckabee's advice to religious-minded government employees to resist the rule of law and deny same-sex couples their legal and constitutional rights is faulty because it suggests to the public that private businesses are not the only ones being afforded the same rights as the individual — the government is as well. And that flies in the face of everything Republicans stand for. Additionally, Huckabee's recommendation that religious folk and government clerks should protest the ruling by utilizing civil disobedience is also laughably contentious when considering his own track record.

"Huckabee only believes that the judiciary should be the final arbiter or what is or is not constitutional when it suits his personal beliefs — particularly when it comes to gay marriage," wrote one Forbes op-ed columnist in January this year, citing Huckabee's own words from a 2007 interview, in which he described his own judicial selection process, which included finding individuals who would "strictly" adhere to the Constitution (a promise on which five of the nine SCOTUS Justices did follow through last Friday).

In an interview with NBC's Meet the Press that same month, Huckabee also lambasted the president's unilateral amnesty order, indicating that he would roll back what he considered a violation of the legal process. "We have a thing called the Constitution," said Huckabee to host Chuck Todd.

If Huckabee is planning on winning the 2016 presidential seat, he needs to rethink his own duplicitous stances — cherry-picking constitutional rulings that align perfectly with his own beliefs certainly won't garner him any favor with the traditional right, which values the rule of the Court above all else.

More like this
10 Times Boris Johnson Got It Wrong On Trans Rights
By El Hunt and Sam Ramsden
What Is Barack Obama’s Net Worth? He Makes *Way* More Now As An Ex-President
By Hugh McIntyre
'Heartstopper’s Joe Locke Has A Sweet Message For Queer Fans
By Sam Ramsden
Jake Daniels Just Became The UK’s First Active Football Player To Come Out As Gay Since 1990
By Sam Ramsden
Get Even More From Bustle — Sign Up For The Newsletter