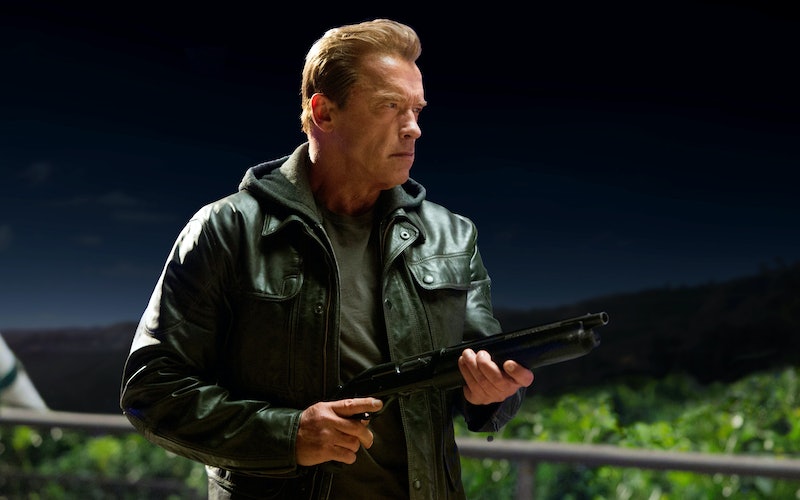 The Terminator franchise has always used the most groundbreaking technology available for the special effects in its action-packed blockbusters. Given that there have been numerous technological advances even in the five years since Terminator Salvation was released, fans' expectations are higher than ever for the production quality of Terminator Genisys. Indeed, Arnold Schwarzenegger's T-800 is tougher yet sleeker than ever, and the character's fight scenes feature some seriously FX-heavy combat. Instead of just filling the film with battles between "The Guardian" and different human-robot-machine mutants, though, the filmmakers took on one particularly notable challenge: a crazy amazing scene in which our current day hero duels with none other than the 1984 version of himself. But how did they make that Terminator: Genisys scene happen?!

Well, it breaks down to a combination of the aforementioned advances in technology along with a very generous budget for visual effects. This ambitious fight required the integration of several types of photography, live action, and animation, and so, according to ComingSoon.net, multiple techniques were used to create the ultimate Terminator battle. For starters, much of the scene was constructed in CGI. The studio reportedly made this choice in order to make the fight "more brutal" while still adhering to the guidelines of a PG-13 rating. The use of such imaging also allowed the production team to make desired changes to the fight without having to bring back the live actors for reshoots.

Speaking of live actors, you might be wondering just how much of the fighting is done by Schwarzenegger himself. The answer is "not a lot," which is understandable when you take into consideration the fact that the former mayor of California is 67 years old. It is a common technique in the entertainment to use a body double while filming, and according to Business Insider, this was another heavily utilized method in creating the fight. By performing facial scanning on Schwarzenegger and then digitally mapping the actor's facial features onto his body double, the studio was able to effectively portray the modern-day Terminator engaging in violent combat.

Interestingly, this method was also available to the filmmakers in recreating the 1983 Terminator. The necessary digital facial features were derivable from casts of Schwarzenegger's face that were made for the first film by visual effects creator Stan Winston (whose work can also be seen in the first three Jurassic Park movies). The casts' features could then be mapped onto a body double to create the illusion of a living, breathing 36-year old Schwarzenegger.

Combine the physical combat between these two Terminators with some added 3D, and it's a recipe for an epic showdown. But will the final product live up to the time, money, and creative energy that was invested in it? Find out when Terminator Genisys hits theaters July 1.

More like this
You Can Thank 'Spider-Man' For The Meme-ification Of Movies
By Dana Schwartz
The Viral TikTok “30,000” Sound Fits Nearly Every Scenario
By Courtney Young
TikTok Is Using A ‘Love Island’ Sound To Expose Their Weird Crushes
By Courtney Young
Kris Jenner’s Advice For Kim Kardashian Is Going Viral On TikTok
By Courtney Young
Get Even More From Bustle — Sign Up For The Newsletter