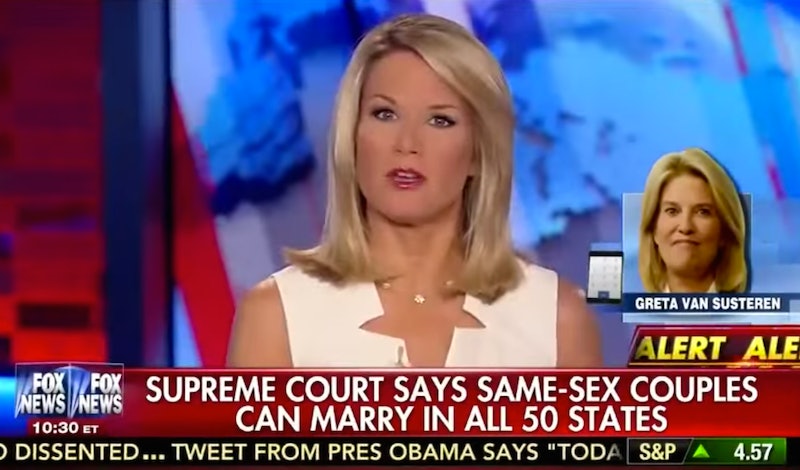 Much of America was thrilled that SCOTUS legalized gay marriage nationwide last week, but there were some people who didn't approve or were just plain confused by the same-sex marriage ruling. Of course, steadfast conservatives, including many GOP 2016 presidential candidates, thought the decision was an abomination and weren't shy in sharing their beliefs. Presidential hopeful Mike Huckabee tweeted: "I am faithful to the issue of marriage because it’s the Biblical position, the historical position, and the right position."

What's much more amusing than religious rejections of same-sex marriage though, is people's complete confusion about what the SCOTUS decision actually means. Fox News reporter Martha MacCallum interpreted the new freedom to marry anyone to mean that polygamy was now legal. On her Fox News segment Friday, she said: "We're just trying to think about the ramifications when a precedent is set, what it means down the road, right? So, suppose three people say, we want to be a marriage. We're three people, and we love each other and we want to be married. What's to prevent that under this?" I hate to break it to you, MacCallum, but same-sex marriage and polygamy are two quite different things.

Here are four other dumb misinterpretations of the same-sex marriage ruling...

A group of evangelical Protestant pastors released a statement claiming that SCOTUS' ruling was meant to change everyone's beliefs on gay marriage. They wrote: "We will not allow the government to coerce or infringe upon the rights of institutions to live by the sacred belief that only men and women can enter into marriage." Legalizing same-sex marriage doesn't mean anyone's required to alter their religious beliefs, it simply dictates that people can marry whomever they wish.

Franklin Graham, a Christian evangelist, told Fox News that the Court was trying to "redefine" marriage by legalizing same-sex marriage. He said: "I will never recognize it in my heart because God gave marriage between a man and a woman and that’s what marriage is. And I don’t think the court — since it never defined marriage — doesn’t [sic] have the right to redefine it." Sorry, Graham, but SCOTUS wasn't attempting to redefine anything (it's not a dictionary), it simply ruled that marriage is a universal right in America.

Scott Walker thinks people excited about the same-sex marriage decision should respect others' religious opinions and was a bit confused about how SCOTUS interpreted the Constitution. During an interview with radio host Hugh Hewitt at the Western Conservatives Summit on Saturday, Walker said:

To me, it is not freedom from religion, it is freedom of religion, which ultimately means we have the right to practice our religious beliefs and not have others interfere. We should respect the opinions of others in America, but that in return means that they not only respect our opinions, they respect what is written in the Constitution.

The whole point of the ruling was that gay marriage is a constitutional right.

Chief Justice John Roberts' misinterpretation was the most worrisome, since he heads the Supreme Court. In his dissenting opinion, he wrote:

This court is not a legislature. Whether same-sex marriage is a good idea should be of no concern to us. Under the Constitution, judges have power to say what the law is, not what it should be. ... The fundamental right to marry does not include a right to make a State change its definition of marriage.

The ruling wasn't a new law mandating gay marriage — it affirmed that same-sex marriage was already a part of the law of the land. Luckily, five other justices believed the right to marry meant some states would have to alter others' views of marriage.