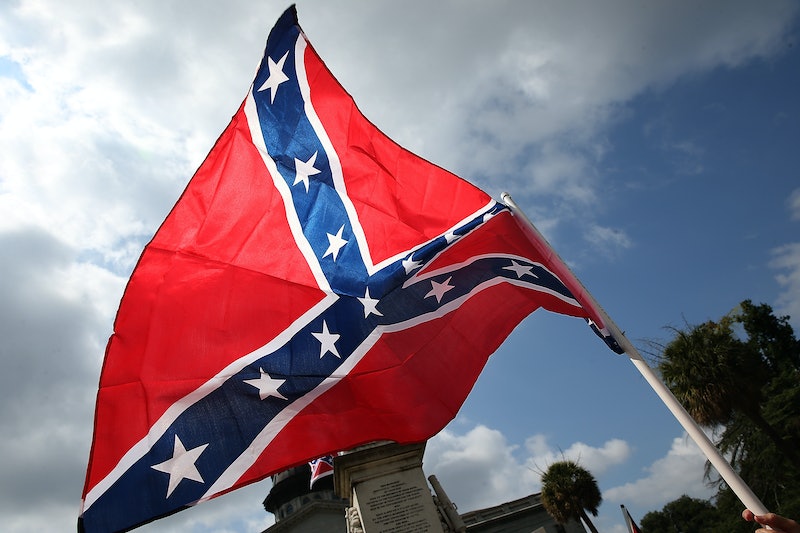 Since the Confederates lost the Civil War 150 years ago, a country-wide debate on the Confederate flag’s place in American society has re-sparked. Initially, many Southerners chose to wave the Confederate flag in tribute to their ancestors and the South’s attempt at secession as well as showcase their pride in their “southern heritage," there is no hiding from the simple fact that the flag has a long deep-rooted history of racism and slavery — and Republicans' changing views of the Confederate flag are indicating they're becoming aware of that.

After photos of Charleston shooter Dylann Roof holding the Confederate flag — among other racist apartheid paraphernalia — emerged on a website allegedly registered to him, several communities in the South are making sure their voices are heard. Days after Roof allegedly committed a hate crime killing nine innocent churchgoers in the Emanuel AME Church, memorials of Confederate soldiers and generals were defaced with poignant statements like "Black Lives Matter" in spray paint all across the United States. Also, in several Southern states, streets and parking lots were used for pro-Confederate flag rallies. In South Carolina, Bree Newsome, an activist and educator from North Carolina, climbed up a 30-foot flagpole on Saturday to remove the Confederate flag waving in front of the statehouse, making a powerful political statement.

And now, Republicans are making statements of their own when it comes to discussing the lifespan of the Confederate flag. Here are where some of the major Republican party members stand.

Sen. Bob Corker (R-Tenn.): Would Vote Against Flying The Flag

I see no reason for it to continue, I would certainly vote against flying the flag and my sense is that's what they are going to do. It serves no purpose anymore, especially after what has occurred. I love South Carolina, but I think in light of what's happened, there's no question in my perspective over what ought to happen.

It is up to the people of South Carolina, but I hope they remove a flag that many see as a symbol of racial intolerance. The flag to fly is the American flag because it is a symbol that this is one country and we are all Americans.

We are not going to allow this symbol to divide us along longer. The fact that it causes so [much] pain is enough to move it from the capitol grounds. It is, after all, a capitol that belongs to all of us.

Ohio Gov. John Kasich: It's Up To The People Of South Carolina

On NBC News' Meet The Press:

You can look at it any way you would like. But after this shooting, and after the call for it to be taken down by the families of the victims, I see it as a road block to the future of my state. My state will never be able to move forward after this shooting if we don't take the flag down. The people at the A.M.E. church, the families of the victims changed everything by their grace, by their love, by their forgiveness, making it impossible for a guy like me to say, "Keep the flag up."

Rick Santorum: It's Not Up To Federal Government

I take the position that the federal government really has no role in determining what the states are going to do.

Mike Huckabee: This Is Not An Issue

I don’t think you could say that the presence of one lunatic racist, who everybody in this country feels contempt for, and no one is defending, is somehow evidence of the people of South Carolina. ... I don’t think [the American people] want us to weigh in on every little issue in all 50 states that might be an important issue to the people of that state but not on the desk of the president.

Wisconsin Gov. Scott Walker: This Is A State Issue

In a statement to BuzzFeed:

The placement of a Confederate flag on the Capitol grounds is a state issue and I fully expect the leaders of South Carolina to debate this but the conversation should wait until after the families have had a chance to bury and mourn their loved ones.

This is an issue that they should debate and work through and not have a bunch of outsiders going in and telling them what to do.

Both those who see a history of racial oppression and a history of slavery, which is the original sin of our nation, and we fought a bloody civil war to expunge that sin. I also understand those who want to remember the sacrifices of their ancestors and the traditions of their states, not the racial oppression, but the historical traditions and I think often this issue is used as a wedge to try to divide people.

Carly Fiorina: Agrees With Romney, But It's Up To South Carolina

To reporters at a Faith and Freedom Coalition conference:

Ben Carson: South Carolina Should Have A Discussion

The Confederate flag causes a lot of people angst and they are not able to see beyond that. I think the people of South Carolina should sit down and have an intelligent discussion about what can they use that captures their heritage, captures the heritage of America and allows them to coexist in peace.

Look, we'll let the states decide that. But again, just like with the gun issue, let's have that debate at the right time. I mean, right now, we should all be in mourning.

On WRKO's The Kuhner Report:

I think the flag is inescapably a symbol of human bondage and slavery, and particularly when people use it obviously for murder and to justify hated so vicious that you would kill somebody, I think that that symbolism needs to end, and I think South Carolina is doing the right thing.

While this is a necessary step towards addressing a divisive symbol of racism in our country, this step will mean little if we do not also honestly confront and discuss the fact that these murders were born out of ugly hate and racism. That is what we must stand up against and fight even more than any symbol; it is long overdue that we not only shine a light on and condemn the symbols of hate, but on the haters themselves as well.

Donald Trump: Put It In A Museum

I would take it [the Confederate Flag] down, yes. I think they should put it in a museum and respect whatever it is you have to respect.

In the 21st century, that flag shouldn't be on the Capitol ground in the state of South Carolina. I think they'll do the right thing. They'll remove the flag.