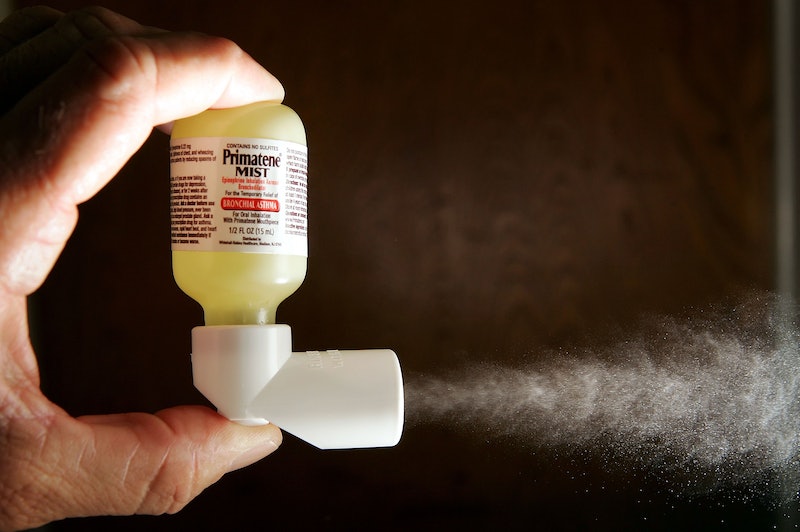 If the news in this week's Neuron journal is to be believed, we may have just discovered a cure for asthma attacks — by fiddling with the nerve cells in the lungs. And it's big news, because asthma is a big problem. One in 12 Americans has asthma of some kind or another, and it costs the health care system huge amounts of money and many people a lot of pain and fear. And, up until now, there's been no effective cure.

Of course, asthma isn't a modern invention — we've been trying to deal with it for centuries, sometimes in seriously horrible ways. The ancient Egyptians used to try and deal with attacks by inhaling ash and smoke from fires, while Galen the ancient Greek physician treated sufferers with the disgusting concoction of owl's blood in wine. The author Marcel Proust had one of the most painful remedies for asthma attacks in history: he literally had the inner tissue in his nose burnt out as a child. Not once, but 110 times. And it didn't do a thing.

We only started to learn how asthma works in the 1960s — it's a respiratory disease in which the muscles around the respiratory tract spasm and swell and the airways become phlegm-covered and inflamed, restricting air flow. And this new discovery might lead to new treatments that effectively dismantle asthma attacks altogether. We've come a long way.

Nowadays, if you're a regularly sufferer of asthma attacks, you'll be familiar with all the clunky accoutrement you'll need to get through: a huge inhaler with a giant spacer. But a new study, done by a collection of asthma scientists and published today, has a new approach entirely: don't just ride out the attacks and persuade the respiratory airways to stop spasming. Stop the damn things dead before they can take hold. Now that's a solution.

How it would actually work in the real world remains to be seen — but we may have just seen the first step in the development of an asthma EpiPen. Here's how it works, how we've dealt with asthma in history, and why this is super-important — and not just for wheezing, gasping sufferers.

So, What's The Breakthrough?

The new science is actually based on something pretty simple: to get people to escape asthma attacks, simply stop pain cells from sending signals to the brain.

The particular cells the scientists targeted were nociceptor sensory neurons in the lungs. Nociceptors are the body's alert system: they detect horrible stimuli and immediately cause the body to go into "action stations" mode. The scientists wanted to know what would happen if they simply turned off the nociceptors in the lungs of people who had asthma attacks because of dust, smoke or other environmental factors. Would it break the link between a panicking cell and an asthma attack?

The answer, as it turns out, is yes — and it's given us a particularly cool understanding of what actually happens when you have an asthma attack.

Blocking or silencing the nerve cells with a numbing agent called QX-314 (which is basically a Bond agent name) stopped asthma attacks in their tracks, because the cycle didn't even get started. Cue no hysterical coughing, no restriction in the airways, and a happy attack-free life.

Will We See It On The Market Soon?

Aside from the obvious medical benefits to today's asthma sufferers, let's face facts: air pollution is likely going to rise. And that will mean more asthma. As much as the world's powers pledge to meet global warming and pollution targets, the future's likely to look more like Beijing (smog, air masks and respiratory disorders) than it is, say, rural Canada. So this sort of discovery will be vastly useful for helping vulnerable people suffering from poor air quality.

It'll probably help other kinds of respiratory and inflammation disorders, too. If other diseases that involve inflammation and an over-active immune system have a similar relationship with their nerve cells, we may have just found a cure for those, too.

But it's always a long, long road from discovery to actual effective medical treatment. There are years of tests ahead, from mice to humans, and then a drugs company will have to be persuaded to market it. This asthma miracle may not make it out into the world for decades.

So if you've got asthma, raise a glass tonight — but be prepared for the next step to take a while. At least you don't have to go through what Proust did.