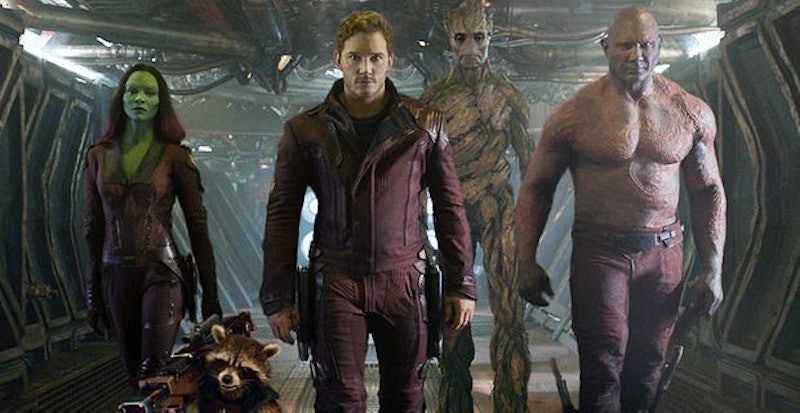 Well folks, it's offical: The Guardians of the Galaxy sequel has a title, and I must say, it lacks the fun and humor that makes the franchise so great. Writer/Director James Gunn revealed today that the name of the Guardians of the Galaxy sequel will be.... Guardians of the Galaxy Vol. 2. I suppose if it's not broke, there is no need to try and fix it. After all, he film needed a title since the sequel to last summer's megahit will hit theaters May 5, 2017. This is welcome news for all Chris Pratt lovers who are currently going through major withdrawals after seeing Jurassic World. Though the film title is a bit dull at first glance, it does have some major significance. In the first film, Chris Pratt's character Peter Quill listens to a cassette tape called Awesome Mix Vol. 1. Galaxy's soundtrack is amazing and the music was an integral part of the film, and Quill's personality.

Though we are nearly two years away from Vol. 2's release, director Gunn has given us a few hints as to what we may see in the new film. At the Saturn Awards this past weekend, Gunn told Collider: “It’s both a bigger movie and a smaller movie because we focus more intensely on some of the characters.”

Though Gunn only has a rough draft of the script thus far, I'm sure it's safe to say that the magic of the first film will make its way into the sequel. Until we know more about the story, here are seven sequel titles that might have had a bit more punch than Guardians of the Galaxy Vol. 2.

1. Guardians of the Galaxy 2: Are You My Father?

Director James Gunn has hinted that Peter Quill aka Star Lord may be reunited with his long last father. From the first film we know that Star Lord is only half human which means that his father could be any number of mystical creatures. I'm certain that a major plot point of this new film will be about Quill discovering his parentage.

2. Guardians of the Galaxy 2: A Raccoon's Tale

My favorite character in Guardians of the Galaxy is Rocket. It really doesn't get much better then a genetically modified raccoon in my eyes. Rocket is hilarious and I desperately want to know more of his back story.

3. Guardians of the Galaxy 2: Return to Earth

In 1988, shortly after his mother's death, Peter Quill was stolen from earth by the space pirates called the Ravagers. Though the galaxy is now his home, it would be hilarious to see how the Star Lord would interact with humans on earth. I imagine it would only be slightly less disastrous than Thor's first time on our planet.

4. Guardians of the Galaxy 2: The Return of Yondu

Yondu was a father figure to Peter Quill, though he did not keep his word and deliver Quill to his father like he was supposed to. Still, I'm sure that Yondu will be furious once he finds out that he doesn't have the real Stone. He's going to be back with a vengeance.

5. Guardians of the Galaxy 2: Star Lord vs. Gamora

I'm just going to tell it like it is: Gamora is much more of a badass that Star Lord is. If she and Quill find themselves on opposite sides, I doubt that Quill would stand a chance against the alien assassin.

He might not have much to say, but Groot infuses a ton of life into the Guardians franchise, and his next of kin would likely do the same. I think his presence especially humanizes Drax, who can get caught up in violence and destruction.

7. Guardians of the Galaxy 2: Can Chris Pratt Get Any More Buff?

If you are a real lover of Chris Pratt like me then you remember him from Everwood (Bright Abbott), and as Andy Dwyer on Parks & Recreation. As lovable as he is, I never expected him to turn into the hunk that he is after he got completely ripped for Guardians of the Galaxy. After Jurassic World, I doubt that Chris Pratt's new bod is going anywhere, the only question that I have is: Can he get any more buff?