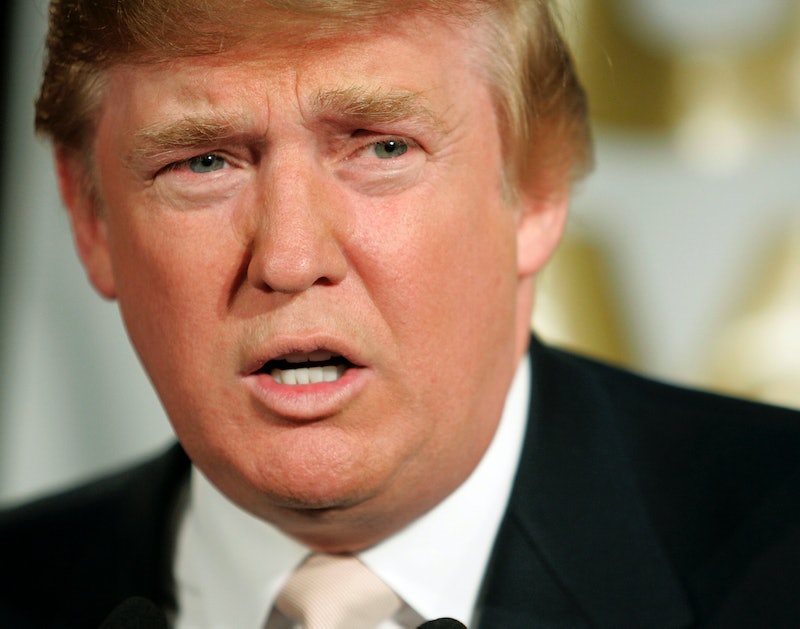 Another day, another Trump-tastically awkward moment. Well, perhaps "awkward" would have been the right word to describe Trump struggling to describe on CNN why he supported "traditional" heterosexual marriage Monday morning when he'd been divorced more than once; Trump's response to NBC cutting all ties with him is beyond even that. Seriously. Get ready to hear an awful lot of Trump's voice in your head, bitterly demanding to know why NBC thinks he's racist when he was just pointing out that Mexicans are "bringing crime and their rapists" to America. I ask you, world! What's wrong with that?!

"NBC IS WEAK," opens the statement (caps are mine, the tone is Trump's). Because sure, that's what shutting down racism is — weak! "NBC IS SO WEAK," the statement continued into its third paragraph, in case you didn't quite grasp his point the first time.

Oh, and he managed to squeeze a crack at Brian Williams in there, too. Here's the full statement:

As of today, Donald J. Trump is no longer affiliated with NBC. Mr. Trump stands by his statements on illegal immigration, which are accurate. NBC is weak, and like everybody else is trying to be politically correct — that is why our country is in serious trouble.

We must have strong borders and not let illegal immigrants enter the United States. As has been stated continuously in the press, people are pouring across our borders unabated. Public reports routinely state great amounts of crime are being committed by illegal immigrants. This must be stopped and it must be stopped now. Long ago I told NBC that I would not being doing The Apprentice because I am running for President in order to Make our Country Great Again.

If NBC is so weak and so foolish to not understand the serious illegal immigration problem in the United States, coupled with the horrendous and unfair trade deals we are making with Mexico, then their contract violating closure of Miss Universe/Miss USA will be determined in court. Furthermore, they will stand behind lying Brian Williams, but won't stand behind people that tell it like it is, as unpleasant as that may be.

There are not enough lawyers in the world to bring all of Trump's various threats to life, I swear.