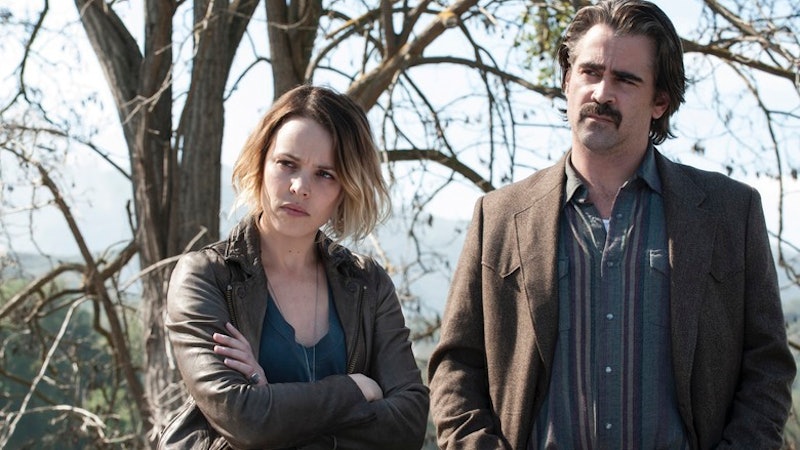 After two episodes of True Detective's second season, it's clear that this season of the series is very different than the Rust Cohle fever dream also known as Season 1. Yes, there's more of that heavy, fatalistic philosophical dialogue creator Nic Pizzolatto is so good at crafting (though, so far, one-liner takeaways akin to Rust's "time is a flat circle" catchphrase haven't popped up, I think Vince Vaughn's character Frank got pretty close with the watermarks on the ceiling speech), as well as the same heavy mood, and long, symbolic title sequence. However, I have to give a point to Season 2, because, so far, True Detective Season 2 is treating female characters so much better than Season 1 did. Especially after episode 2, "Night Finds You."

I'm not saying that Season 2 of True Detective is a beacon for feminists; I don't even know if I would call it a feminist show. And it might be too early to tell if Season 2 really will surpass Season 1 with its treatment of female characters, as there have been only two episodes so far. But, there were two standout moments in Sunday's "Night Finds You" that give me hope: specifically, Detective Ray Velcoro (Colin Farrell) being brought back down to earth by his ex-wife, and a conversation between him and Detective Ani Bezzerides (Rachel McAdams).

Firstly, the scene when Ray's ex-wife, Gena (Abigail Spencer), confronts Ray about being generally a terrible and violent person that can't get his life together enough to be a dad: It seems like a simple enough plot point out of context — the discussion surrounds how he's not a good person, no matter how great of an "antihero" he might be — but, it's worth pointing out that that kind of explicit conversation is very important in a show like True Detective. During the conversation, Gena and Ray also allude to the fact that he killed her rapist, and her inner conflict about the situation. Ultimately, she tells him that she doesn't want him around her son. There's obvious pain in their past, and it's great that True Detective is actually exploring it in Season 2, with Ray being held responsible for the damage he did to the woman he lost. Plus, she really seems to break him, and is obviously the stronger one in their relationship — even though she's been through much darker times than her ex-husband.

And then there was that scene in "Night Finds You" that mirrored all the Martin Hart/Rust Cohle driving conversations in Season 1. Ani and Ray are in the car, and Ani explains why she carries so many weapons on her:

Ani: Could you do this job if everyone you encountered could overpower you? I mean, forget police work. No man could walk around like that without going nuts. The fundamental difference between the sexes is that one of them can kill the other with their bare hands. Any man lays his hands on me, he’s gonna bleed out in under a minute.

Ray: Well, just so you know, I support feminism. Mostly by having body image issues.

Is it heavy-handed? Sure. But I cackled like a witch — not because Ray's line was particularly funny, but because it really did capture just how frustrating and, often, futile it feels, as a woman, when you find yourself in a conversation like that with a man and are attempting to describe the battle that is living every day as woman... only to hear a very ignorant comment in return.

It's especially important a conversation for Ani to be having with one of her colleagues, too, since the police force is generally depicted as such a boys club on television; she is asserting her dominance and authority with twofold the effort that Ray does, and she's doing it well.

These kinds of scenes that are important on a show like True Detective, which presented a first season so full of violence against women, and indicate that Season 2 might be off to a better start in terms of treating its female characters. While it's still too early to tell if his trend will continue, I have faith so far that it will — especially if Ani and Gena continue to be the badasses that they so clearly are.

More like this
Who Could Die In The Stranger Things Season 4 Finale?
By Kadin Burnett
Adele’s All-Female Lineup Includes Kacey Musgraves, Mahalia, & Self Esteem
By Shahed Ezaydi
What’s New On Netflix: 'Stranger Things' & 'Mean Girls'
By Arya Roshanian
At 14, Kate Berlant Had A Wheelie Backpack & One Line In 'Lizzie McGuire'
By Samantha Rollins
Get Even More From Bustle — Sign Up For The Newsletter