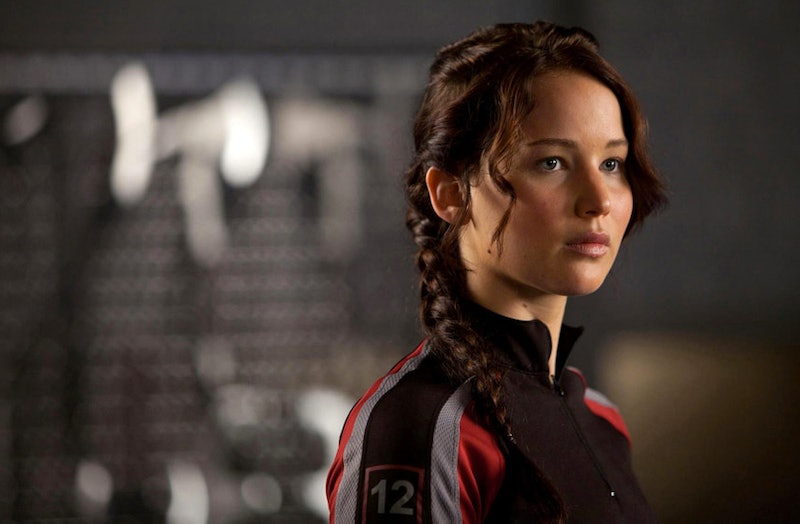 The Hunger Games series is an important one, and not just because of the piles and piles of money Catching Fire is going to make in the coming weeks. No, The Hunger Games is bigger than its box office, and it's more important than its hype. It is, after all, an indictment of capitalism, a scorching look into the dark side of humanity, and a heartbreaking portrayal of the ravages of war, poverty, and sensationalized violence.

Katniss Everdeen is not just important because she is played by Oscar winner/America's best friend Jennifer Lawrence — though that's pretty important, too, and Lawrence should give us a call if she wants to hang. No, regardless of who plays her, Katniss Everdeen is a compelling character all her own. Here are some of the reasons.

She's on a classic hero's journey

Call to action, refusal of the call, mentors, adventures, etc. Joseph Campbell wrote about the hero's journey, Harry Potter and Frodo and Luke Skywalker all went on them — and so did Katniss Everdeen.

Katniss is a classic hero in a couple of ways — there's her journey arc, of course, but there's also that deep-seated resistance to authority. Much like Harry before her, Katniss is a monumental pain in the ass. Tell her to do one thing and she will likely agree before immediately doing something completely different that may or may not put a whole lot more people's lives in danger but that is way more badass and (sometimes) turns out well.

But at the same time, she defies the tropes every time she can. Hers, for example, is not exactly a clear path with a prescribed destiny. If President Snow is the Dark Lord of Katniss's world (and oh, he is), then sure, you kind of assume that in a series which contains adventure, our heroine will play a role in defeating him by the series' end.

Along that path, though, Katniss kicks and screams a bit more than your average Harry Potter — mostly because, though Harry was manipulated, there are far more people trying to micromanage Katniss Everdeen and her "Girl on Fire" image, and our girl is none to pleased with that. Katniss's story is one about agency — hers was taken away early in life through the indignities of poverty, and stripped away more officially when she was reaped for the games.

Even the relatively "good" side of the revolution conflict, the district rebels, do everything they can to control Katniss. She gives in when it suits her — when she can see the tangible ways in which she could help save lives — but in true heroic fashion she goes her own way the second she starts feeling too much the puppet.

I've heard and read a lot of complaints over Katniss's emotional and mental state throughout the books, especially in Mockingjay. And yes, at times it can be grating when your protagonist isn't the most trustworthy of narrators and spends copious amounts of time cowering in closets trying to grapple with her PTSD.

But it's also really damn important. Katniss is not frail because of some kind of naturally weak disposition, she is frail in certain ways as a direct result of the atrocities with which her society has attacked her.

Sure, we've seen damaged heroes before, but the Hunger Games series does not shy away from the sheer amount of damage that poverty and war have done to Panem as a whole — and Katniss in particular. And while it can be soul-crushing at times (let's just say the series' ending isn't super uplifting), the confrontation of the political with the personal and the mental is what sets The Hunger Games apart from most YA franchises, and Katniss is our spokesperson for that.

That's the important thing to remember when it comes to characters — especially female ones — and frailty: Just because they sometimes buckle under the pressure doesn't mean they're not bonafide badasses. Katniss may spend some time weeping or breaking, but when she commits to a plan of action (often one she devises, as she's not one to take orders well) she commits.

When her father died and her mother mentally (if not physically) abandoned their family, Katniss stepped in and learned to hunt and did everything in her power to make sure her family didn't literally starve to death. She stepped up to save her sister in the first movie, and gave Rue comfort in her last hours in the arena.

She's often wrong, and she can be very fickle

The interesting thing about Katniss, and what makes her such a compelling hero, is that she literally wants all of these things. All at once. She flips between them in preference at times (Catching Fire spoiler: feeling more for Gale after he's whipped, feeling more for Peeta when they comfort each other at night and in the arena), but the complexities of her wants — and the way they interact with her literal needs in the plot — are what make Katniss so unfailingly human.

Katniss makes some stupid decisions sometimes. In fact, she does it quite often. Of course she does: She's a 16/17-year-old girl who is being put through hell and who has been thrust into waaaaaay more responsibility than she is ready for. It's not like Harry Potter always made super solid decisions (see: Order of the Phoenix). The series isn't afraid to let Katniss be wrong, and that's a good thing.

Watching her be wrong but still be worthwhile isn't just interesting in terms of the literature itself, it's something that's pretty refreshing to see confronted in a female character — because the mistakes and the emotional instability don't erase her aforementioned capabilities, they just make them more interesting to watch.