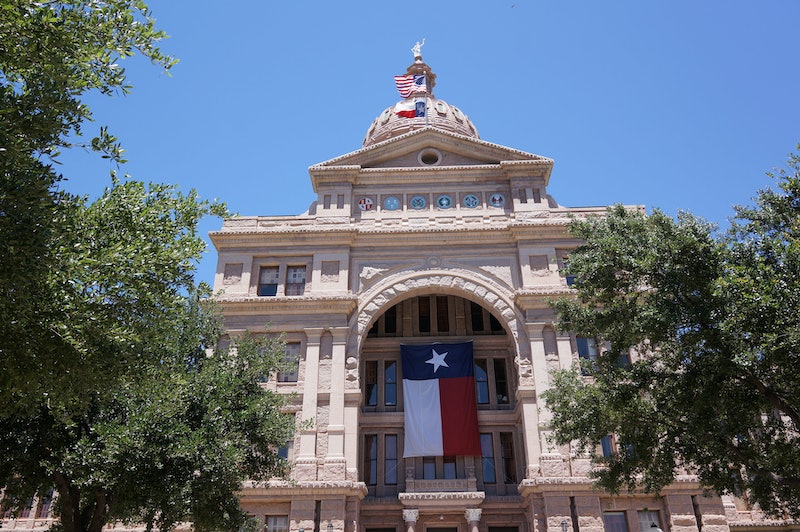 Texas, yet again, is using its size and attitude to be a bit of a big bully. Texas Attorney General Ken Paxton issued a statement Sunday saying that state workers can refuse to issue marriage licenses to same-sex couples if doing so goes against their religious beliefs. Paxton is going directly against the recent Supreme Court ruling that granted marriage rights to same-sex couples in all 50 states, but he said lawyers stand ready to defend Lone Star state citizens should they want to fight that "silly" equality ruling. Unfortunately, this isn't the first time Texas just didn't get equality. There are a number of other times Texas was completely backward when it came to forward-thinking civil rights movements.

Marriage equality proponents have already started answering Paxton's statement. They have said, yes, religious freedom is protected by the First Amendment, but it doesn't mean that government officials who have taken an oath to uphold the law can suddenly decide not to do so, especially when it means treating people unequally, according to USA Today. The state has ignored or quickly dismissed other calls for equality in the past, but, thankfully, it isn't going unnoticed much anymore. Here are a few other times Texas just didn't want to deal with that silly equality stuff.

In March 2014, Cari Cristman, the executive director of a Republican super PAC told Dallas TV station WFAA that women are just too "busy" to worry about equal pay, according to Talking Points Memo.

Well, if you look at it, women are extremely busy. We lead busy lives, whether working professionally, whether working from home, and times are extremely busy. It's a busy cycle for women and we've got a lot to juggle. So when we look at this issue we think, what's practical? And we want more access to jobs. We want to be able to get a higher education degree at the same time that we're working or raising a family.

I mean, men are just less busy, so they rely on their jobs and making more money, which women apparently don't need. You know, 'cause they're busy being women and juggling stuff that doesn't include money.

And the state knows this. For example, the state's former Attorney General Greg Abbott paid his female assistant less than the male assistant in the same position, according to The Huffington Post. Even former Gov. Rick Perry called Texas' debate surrounding equal pay "nonsense." Well, that settles that. I'm just too busy to worry about this, so let's move on to the next issue.

In early June, a police officer in McKinney, Texas, was caught on film throwing an unarmed black teen to the ground and holding her face down with his knee. He also pulled his weapon out and pointed it at other unarmed teens in the video. Local neighbors had allegedly called the police to report a "disturbance involving multiple juveniles at the location, who do not live in the area or have permission to be there, refusing to leave," according to the McKinney Police Department.

One of the pool party attendees, 13-year-old Jahda Bakari, told CBS that police officers were only targeting black teens at the party:

I honestly believe it was about race because mostly they did nothing to the Caucasians. ... They were trying to make us leave, but if we ran, they'd chase after us, and if we stayed, then they'd arrest us.

The police officer accused of becoming aggressive, Cpl. David Eric Casebolt, has since resigned and will not face repercussions. Texas community members took to social media after his resignation and described him as "an American hero," according to The Dallas Morning News.

Texas enacted a law in 2011 that requires voters who cast their ballots at the polls to present photo identification like a Texas driver's or gun license, a military ID, or a passport. The law is considered one of the most restrictive voter ID laws in the country, and it was surprisingly upheld by the Supreme Court in October. The Court didn't give a majority opinion to support the decision, but Justice Ruth Bader Ginsburg did give a six-page dissent saying the court's action "risks denying the right to vote to hundreds of thousands of eligible voters."

Ginsburg said the law would hurt roughly 600,000 voters, or 4.5 percent of registered voters in the state. She said "racial discrimination in elections in Texas is no mere historical artifact," and that a "sharply disproportionate percentage of voters who might not have ID are African-American or Hispanic."

Wisconsin, which also has restrictive voting ID laws, is still not nearly as restrictive as Texas, according to The New York Times. In her dissent, Ginsburg noted that Texas won't accept several forms of ID that Wisconsin did, including “a photo ID from an in-state four-year college and one from a federally recognized Indian tribe.”

Texas Doesn't Make Things Easier For The Poor Or For Women

Former Gov. Rick Perry rejected multiple bills to increase Medicaid funding in the state, which left 1.5 million Texans uninsured in 2013, according to The Huffington Post. The state still has the highest rate of uninsured citizens in the United States, with an alarming 32 percent of people without health insurance, according to the Texas Medical Association. This happened because the state still refuses to accept Obamacare's optional Medicaid expansion.

Furthermore, the state is one of the most difficult for women to access reproductive healthcare. Perry passed a number of abortion care restrictions that forced more than half the abortion clinics in the state to close. Texas also cut family-planning funds by two-thirds, which has made it very difficult for low-income women to access basic preventative services like Pap smears, STD tests, and birth control consultations. Recently, lawmakers have made attempts to cut cancer screenings for low-income women and want to ban insurance plans from offering any kind of coverage for abortion services. These actions keep the poor and women from having equal access to healthcare and any kind of social mobility.

More like this
10 Times Boris Johnson Got It Wrong On Trans Rights
By El Hunt and Sam Ramsden
How To Fight For Reproductive Rights, Based On How Much Time You Have
By Courtney Young
LGBT+ Men Fleeing Afghanistan Were Denied Asylum By The Home Office, New Findings Show
By Sam Ramsden
Celebrities & President Biden Are Enraged By The Leaked Roe v. Wade Decision
By Alyssa Lapid
Get Even More From Bustle — Sign Up For The Newsletter