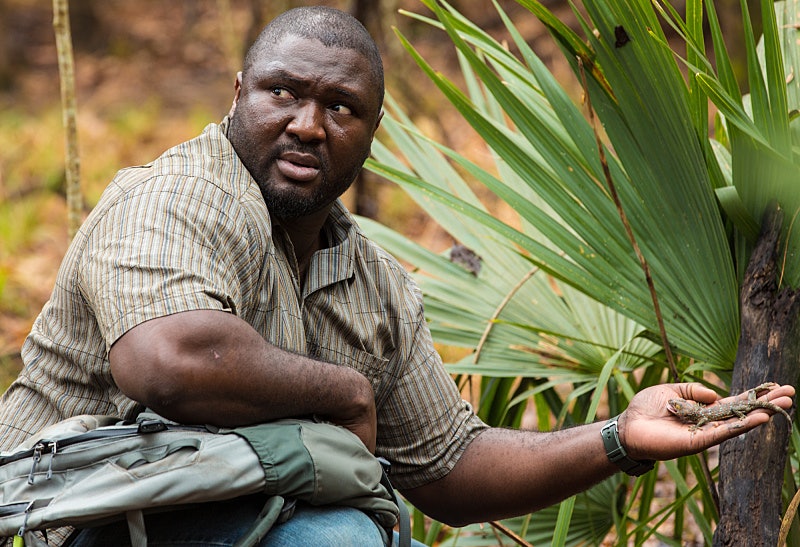 There are a few reasons to be interested in the series premiere of CBS' Zoo. It's a nice way to break up the fun, fluffy reality television shows that dominate the summer, it's based on a James Patterson best seller so we know it's got chops, and it stars James Wolk who was completely delightful on both Mad Men and The Crazy Ones. Right off the bat Zoo has a good hook: Bizarre animal attacks are starting up all across the world and a zoologist (Wolk) links them to his late father's theories about the evolution of the animal kingdom. But, while the events in the novel and the show are fictional, most of the animals in Zoo are 100 percent real instead of CGI.

I don't know about you guys, but this news really shocked me. I had assumed we would be dealing with a lot of green screen and actors working with little tennis balls to be filled in with computer animation later. Nope! These are some real life lions, tigers, and bears! So real, in fact, that PETA is protesting the show. In a statement, they admonished the use of wild animals by CBS, saying:

By producing a show that exploits wild animals, including lions, CBS has proved that it’s out of sync with public opinion at a time when people are shunning SeaWorld’s captive orca sideshows, states and counties are passing laws banning wild animal acts and private ownership, and Ringling Bros. is taking elephants off the road. Lions belong in the wild, not confined to tiny cages and forced to perform tricks, often under the threat of beatings. CBS should employ only humane and versatile computer-generated imagery, as so many other productions have done. PETA hopes Zoo will be one of this summer’s first cancellations.

For its part, CBS responded with a statement about the care of the animals on the show saying, "Everyone involved with Zoo has tremendous respect for PETA and its cause. The care, safety, and overall well-being of any animal on our set is a top priority of the production."

Still, for the actors at least, using real animals sounds pretty terrifying. I've heard of method acting but this seems extreme. Apparently, they have live animals on set regularly, and if the animals fall asleep during filming they simply have to stop production and wait for them to wake up! At a CBS summer junket author James Patterson talked about working with live animals on the set.

I wouldn’t call myself a pet person. I’m not really an animal person. But in signing on to do Zoo, we’re working with animals. The first day I turned up, there were two live lions in front of me. It was really a baptism of fire. You have to respect animals and the way you’re supposed to behave around them.

On the one hand, I think this will make for some great acting. My guess is it's easy to find motivation when a real life bear is chasing you. On the other hand, I am a little nervous for the actors and don't want anything to happen to Wolk's beautiful face! But, it certainly makes the show stand out and will add a level of authenticity to it that is hard to create with CGI. Not to mention I'm sure they have a lot of trainers on set and safety precautions around the animals to keep everyone safe and healthy. They just better be careful!

More like this
Michael & Kathleen Peterson’s House From ‘The Staircase’ Has New Owners
By Kadin Burnett and Kayla Blanton
Harry Styles & Florence Pugh Get It On In The Wild 'Don't Worry Darling' Trailer
By Alyssa Lapid and Sam Ramsden
The Time Traveler’s Wife Book Has A Heartbreaking Ending
By K.W. Colyard
Selena Gomez’s ‘SNL’ Hosting Debut Had Twitter Gushing Over ‘Barney’ & Wigs
By Stephanie Topacio Long
Get Even More From Bustle — Sign Up For The Newsletter