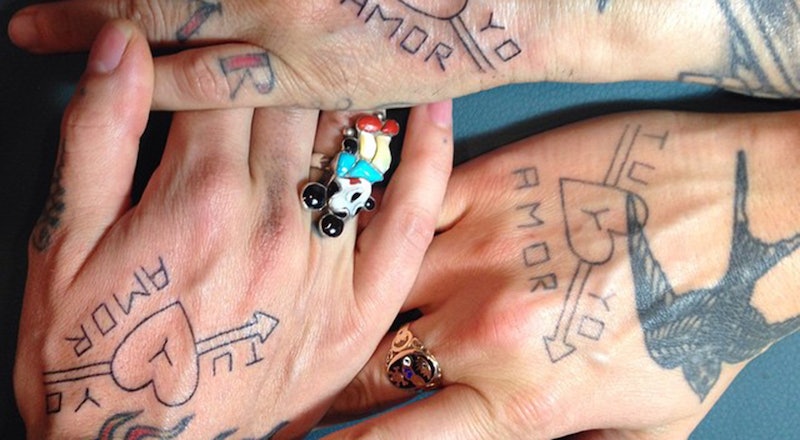 Not gonna lie, there have been many times I've spotted a really gorgeous looking arrow tattoo, but every time, I've always thought to myself: what does a tattoo of an arrow mean? And more specifically, why did that person decide to rock one? As it turns out, this history and meaning behind arrow tattoos is as vast and varied as the ink you might see today.

When I was younger, I was really fascinated with tattoos and told myself I'd get a small one when I was older. Now, at 23 years old, I still haven't gotten one, but I'm thinking that maybe a small arrow tattoo could be it. Kendall Jenner and Hailey Baldwin currently rock super small tattoos, and it totally works for them. I mean, a cute small little arrow behind the ear would be perfection, no?

Before I made the decision to stamp anything on myself, I really wanted to delve deeper into the meaning of the arrow tattoo. “Arrow symbolism is cross cultural and have been an image found in early cave paintings by Native American people,” says Stephanie Tamez, a tattoo artist and owner of Saved Tattoo in Brooklyn, New York. “Each person will have a different perspective of their arrow tattoo but we can generally see meanings resonate through history. I take my tattoo imagery from my Indigenous and Mexican American background. I enjoy incorporating arrows, and crosses into tattoos in multiple ways.”

As Trent Aitken-Smith wrote in his book The Tattoo Dictionary, “Within Native American cultures, the sign of two crossed arrows is used to represent an alliance.” This could be why arrows have become such a popular design to get as a friendship tattoo.

Another common type of tattoo imagery is the one that shows up in the traditional American style: A heart, often with a name banner, that’s been shot through with an arrow. “The image of an arrow is associated with issues of emotion and the heart,” Michael McCabe, a tattooer and cultural anthropologist who has written about the history of tattooing for 30 years, tells Bustle. This, McCabe says, goes back to Greek and Roman mythology, specifically Cupid. “Cupid is the God of desire, erotic love, and attraction,” McCabe explains. As the story goes, Cupid is armed with a bow and golden arrows that were supposed to spark desire in anyone who was struck by one.

McCabe also notes that, “In the west, many tattoo images originated in military contexts.” Men who were fighting in wars away from home would often get the heart and arrow tattoo as a way to keep their loved ones close. These types of tattoos still remain very popular.

From these few definitions, we can establish that these arrow tattoos not only look cool, but they can have really deep meanings behind them as well. “Tattoos are just like cave paintings: We show our self identity, desires, hopes, and dreams through images tattooed in our skin,” Tamez says. And to me, most of the meanings behind these different styles of arrow tattoos stand for nothing but encouragement and positivity.

This article was originally published on July 6, 2015