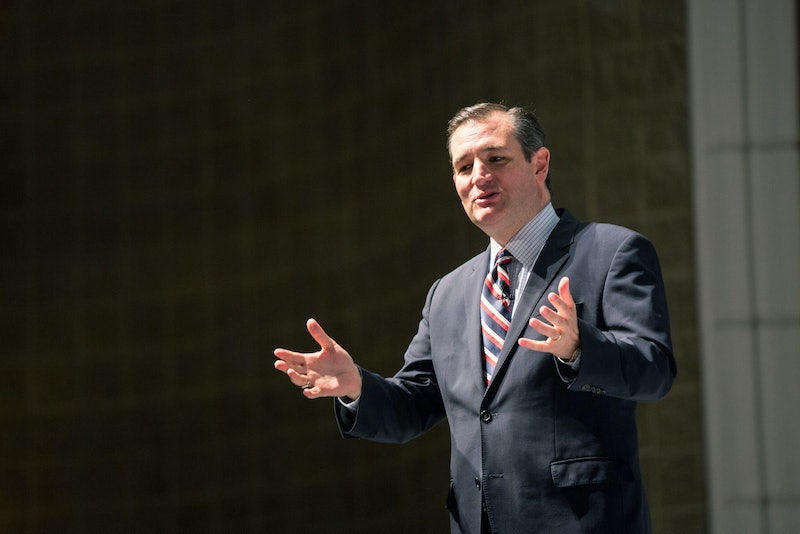 It has been a difficult few days for the right wing of the Republican party. Last week, the Supreme Court ruled in favor of Obamacare subsidies and against state-level bans on same-sex marriage. GOP presidential candidates, none of whom support same-sex marriage, have appeared on television to make some rather dumb responses to SCOTUS' gay marriage ruling that are sure to elicit a ton of eye rolls.

Let's review that landmark ruling, with a few sentences from Justice Anthony Kennedy's majority opinion: "It would misunderstand these men and women to say they disrespect the idea of marriage. Their plea is that they do respect it, respect it so deeply that they seek to find its fulfillment for themselves."

Perhaps it should come as no surprise, then, that same-sex marriage opponents are trying to find some wiggle room in the ruling on same-sex marriage, which is now known also as just "marriage" and "the law." Most of them are focused on the issues as one of religious freedom, with some even calling for the Constitution to be amended. Clearly, the GOP is going to have a tough time opposing same-sex marriage, which has become a plank of the party platform, now that the Supreme Court has made its ruling. So what are they saying they want to do about it?

Cruz is calling for a constitutional amendment that would do away with the lifetime appointments of Supreme Court justices. The Texas governor said on the Today show that the justices violated their judicial oath. He also said he'd support Texas state clerks who wanted to deny marriage licenses to same-sex couples on religious grounds.

Huckabee said on ABC's This Week that the Supreme Court majority was "five unelected lawyers." According to him, the ruling showed they "decided that they knew better than the legislators who actually get to make law, that they know better than the people who voted in over 30 states to affirm traditional marriage." Mr. Huckabee, you kinda just described a Supreme Court justice's actual job, but OK.

Jindal said it's wrong for the government to "force" Christians to participate in wedding ceremonies that violate their beliefs. He said on Meet the Press the decision would "pave the way for an all out assault" against religious freedom. "The left wants to silence us," Jindal said. "Hillary Clinton wants to silence us. We're not going away."

Rick Santorum: Won't Someone Think Of The Children?

Santorum told Fox News he was concerned about protecting "people of faith" from the consequences of SCOTUS' ruling. Marriage isn't about two adults, Santorum said, "it's always been about children, about creating the correct environment for the next generation to be raised in."

Chris Christie: Hasn't Read It Yet, But He Is Sure He Won't Like It

The usually feisty Christie was a little disappointing in his initial response to the ruling, saying he "agreed with Justice Roberts" who wrote the dissent but said in a statement that he "hadn't fully read the ruling." At least show up prepared to play, Gov. Christie. Otherwise, what fun is that?