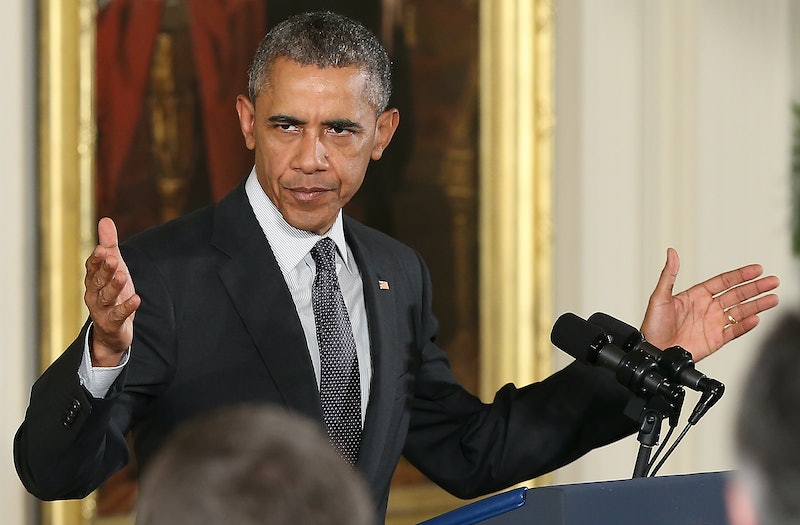 President Obama is in the final stretch of his presidency, and he's made it pretty clear he's not going to be sitting idly by. In a Huffington Post op-ed published Monday evening, Obama laid out his plan to expand overtime pay, a proposal that would affect 5 million workers by 2016 and cover salaried workers who make up to $50,400 next year. That's nearly double the salary of what current overtime regulations allow.

Right now, overtime pay is limited to people making $23,660 a year or less. Anyone who makes more than that is disqualified from receiving a time-and-a-half rate for working overtime, given that their job meets certain requirements. And since this is a Department of Labor issue, Obama won't need Congress' approval for this dramatic jump.

Obama began his op-ed by applauding the historic achievements the country saw in the past week — from SCOTUS' rulings on Obamacare and gay marriage to signing new legislation that granted him more negotiating power in Pacific trades. But he insisted that more work needed to be done to ensure that economic recovery continued for all Americans, particularly those in the middle class. Obama said it was his "top priority" to strengthen this demographic through "middle-class economics," meaning that everyone would be afforded the same opportunities and play by the same rules to get a fair shot at the American Dream.

In this country, a hard day's work deserves a fair day's pay. That's at the heart of what it means to be middle class in America.

POTUS didn't go into specifics about his overtime plan, but he'll be heading to Wisconsin to explain more, according to his op-ed. Judging by his rhetorical question game, Obama will likely propose infusing more money in socioeconomic programs to educate the up-and-coming generation.

Let's invest in America's future. Let's commit to an economy that rewards hard work, generates rising incomes, and allows everyone to share in the prosperity of a growing America. Let's reverse harmful cuts to vital programs, and instead make the critical investments we need to grow our economy and strengthen the middle class.

The last two years of a two-term president are undoubtedly the most interesting to watch because gone are the pressures of a re-election bid or the careful rhetoric during his party's congressional runs. These are the final two years of Obama's stay in the White House, and he seems determined to make a final push for what he really cares about. All those promises from 2008, reiterated in 2012, that you thought were gone? Well, they could be coming in strong before he's outskies next year.