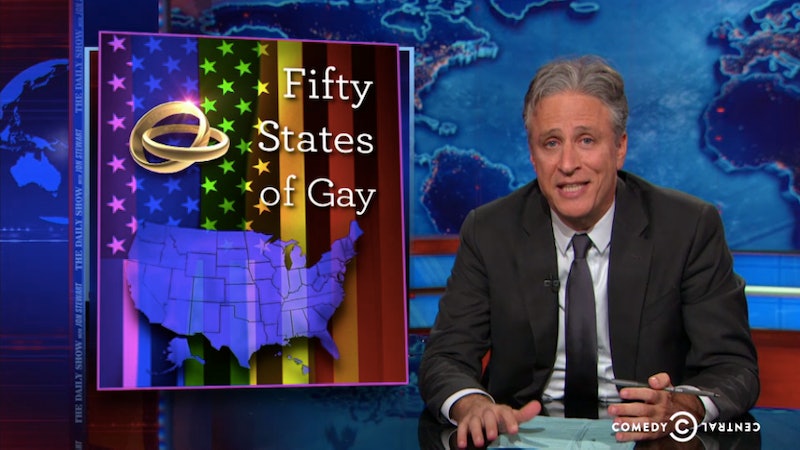 Last week was undoubtedly one of the most eventful times in our country's recent history. From the decline of the Confederate flag (finally!) to the Supreme Court's upholding of Obamacare and its landmark decision to legalize gay marriage nationwide, it really has been a liberal's dream week. As for the GOP, it was hardly the outcome they wanted, which is why Jon Stewart blasted Republicans' views on gay marriage, including their "hyperbolic apocalyptic rantings" spurred by the Supreme Court's historic ruling.

In a chorus of ominous voices heralding impending doom for the nation, Republicans such as Texas Sen. Ted Cruz warned this was "some of the darkest 24 hours in our nation's history." Which, according to Stewart, could only mean one truly horrifying thing:

Cruz wasn't alone in "good news-mageddon." From conservative pundits on Fox News to presidential hopeful Mike Huckabee, the GOP spoke out on how "troubling" the Supreme Court's gay marriage ruling was since it, ahem, would open the door to legalizing polygamy or incest and drive all the anti-gay florists and caterers out of business.

And then came the "hate on SCOTUS" parade as one right-wing Republican after another questioned the country's "crazy system" of nine Justices determining the law of the land. Well actually... the Founding Fathers chose to put a Supreme Court in place to keep the other branches in check.

But even those on the Supreme Court bench had some dicey words to say about the decision, like Chief Justice John Roberts, who doubted the Court's own power to determine whether something is or isn't constitutional, saying that decision should be made by the people. And Justice Samuel Alito argued the ruling would create the unfair outcome of forcing anti-gay folks to keep quiet in fear of being labeled a bigot.

"Why can't we just continue disliking and shunning the people we've always disliked and shunned. Everybody was always OK with it... but them."

But the problem isn't with the Supremes. The blame lies with GOP candidates who back "traditional marriage" yet aren't necessarily paragons themselves. Take, for instance, Republican Donald Trump, who in an interview with CNN's Jake Tapper, fielded questions about his less than stellar marriage record. Oh yes, in case you forgot, the Donald has been married three times. In the interview, Trump blamed the failures of his marriages on himself... and his booming business because apparently things were going too good in the office for him to focus at home. Go, Stewart, go:

"I am for traditional marriage, but to be fair, the Trump business is harder than any wife could possibly be. Wouldn't you f*ck one of my golf courses? I think you would. All 18 holes."

Republicans have spoken loud and clear on their problems with the Supreme Court's gay marriage ruling. But while that might carry them into their party's primaries, they'll have to switch their rhetoric once they hit the general election trail. After all, with more than 57 percent of Americans supporting same-sex marriage, being an anti-gay politician is going to be a tough sell.

But if Republicans wanted the opportunity to try and sway some loyal Daily Show viewers (and throw in a couple of jabs at the comedian), they could finally have their shot. Stewart reportedly has an open invitation for GOP-ers to tape a segment for his final day on Aug. 6, which includes telling him to "f*ck off," according to the New York Post. Now that would make for a real send-off.