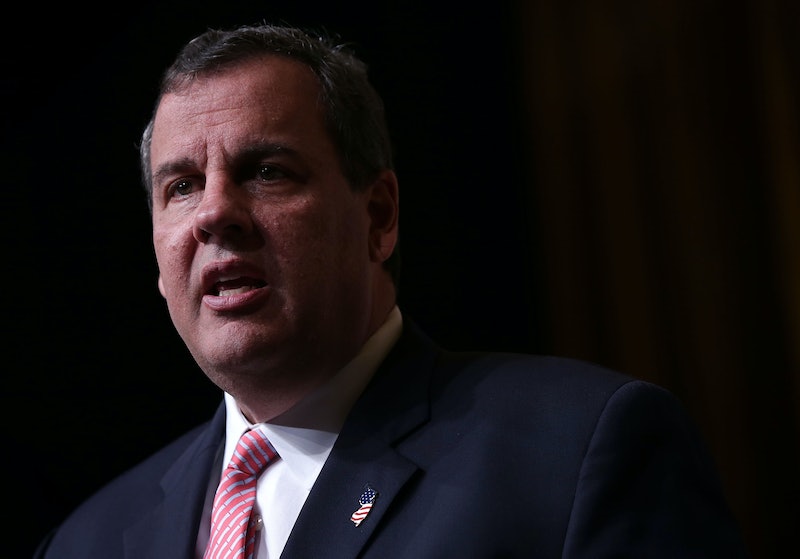 In what is shaping up to be the most crowded Republican presidential field in history, the GOP is about to welcome yet another contender to the race. New Jersey Governor Chris Christie is expected to announce his presidential campaign on Tuesday, making him the 14th major candidate vying for the Republican nomination. While the public may know him as the gruff, tell-it-like-it-is governor whose career will forever be tarnished by the Bridgegate scandal, they might know less about Chris Christie, the presidential candidate, particularly where he stands on issues outside of the Garden State.

Foreign policy is widely considered to be one of the gubernatorial leader's weaknesses, but Christie tried to hide the shortcoming during a campaign speech in Portsmouth, New Hampshire last month. In order to set himself apart from his GOP opponents, the majority of which have more experience with foreign policy, Christie criticized them for using American exceptionalism as a "punchline in a speech that makes you feel all warm and fuzzy." For Christie, American exceptionalism "isn't a punchline — it's a set of principles." He told the crowd in Portsmouth:

Because throughout history, leaders in both parties have based our foreign policy on these principles — strength, leadership and partnership with the people and nations who share our values. And it's served the world and us pretty well.

Besides these platitudinous principles, what exactly is Christie's stance when it comes to America's role in the world? Here are five components to Christie's foreign policy vision.

America Must Get Involved Around The World

During his 45-minute speech in New Hampshire, Christie emphasized the importance of America's involvement in international issues, saying, "We have never ignored the crises in the world around us." However, that didn't seem to be the tune he was singing during one of the worst international crises in recent history, when American involvement was crucial. Last October, just when the dust from the Bridgegate scandal was starting to settle, Christie made headlines again for imposing a mandatory 21-day Ebola quarantine for all health workers returning from West Africa. Obama criticized the policy for potentially discouraging American workers from volunteering to help out in Ebola-stricken Africa.

He Would Beef Up The Military

Christie also proposed reversing sequestration cuts to the military and increasing resources and troops. He even laid out specifics, like raising the number of naval ships to 350 from roughly 260, adding 2,500 combat aircrafts to the Air Force, and not reducing the Army and Marines to their pre-9/11 numbers.

He Defended The NSA's Surveillance Program

Having handled terrorism cases as U.S. Attorney for New Jersey prior to being governor, Christie has formed a very hard-line view of government surveillance, supporting both the NSA's mass spying program and the Patriot Act. He told the crowd in New Hampshire:

Not only did Christie call the Obama administration's nuclear deal with Iran "flimsy," but he strongly believes — and warns — that the deal will open a dangerous door. He said in Portsmouth:

I have grave concerns over how we’re going to make Iranians live up to their end of the bargain. ... The deal as structured will lead to a nuclear Iran and, then, a nuclearized Middle East.

In February, during a similar speech in Iowa, Christie blamed ISIS's continued parade of violence on the Obama administration, even going so far as to say that the militant group was "emboldened by the lack of leadership from Washington."

You see the president taking bows, saying he has terrorism on the run, yet ISIS is beheading people and burning foreign soldiers alive.

While Christie didn't lay out a detailed plan for how he would combat ISIS, he called for better diplomacy and emphasized the importance of "empowering our allies and friends." He also touted his leadership skills as U.S. Attorney, suggesting that they'd translate well on a national and international level.