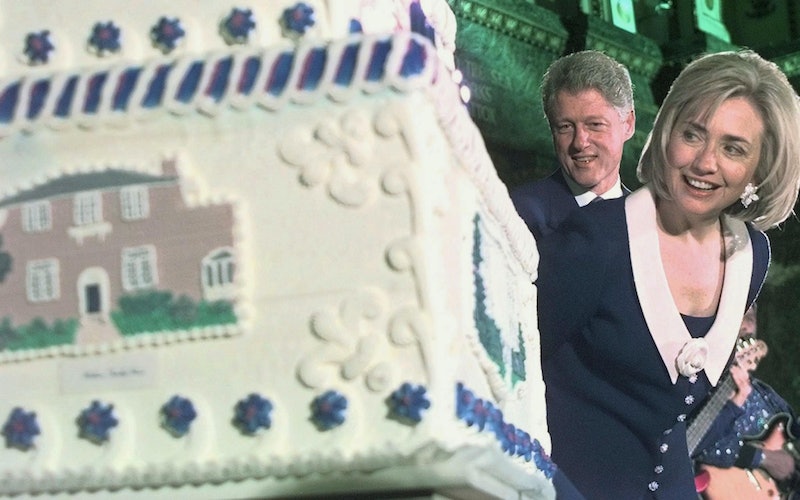 Hot on the heels of joining Instagram with a smart, snarky nod to her critics, Hillary Clinton joined Pinterest Tuesday with a selection of boards and pins that make clear she's been thinking on this one for a while. From "What We're Fighting For" to "Newest (And Best) Job: Grandmother," Clinton's boards are deliberately organized to showcase the presidential candidate's myriad interests — and, much like her Twitter, Facebook, and Instagram presences, Clinton's Pinterest persona isn't afraid to capitalize on the same passions her critics have used as ammunition ("Can you really be a president and a grandmother," anyone?).

Rather than recycle posts on various social media platforms, Clinton and her campaign have adapted her message for each individual platform. Her bio on Pinterest, for example, is designed to fit the site's ethos: "Granddaughter gift ideas, hairstyle inspiration, favorite moments, and some other things," whereas her Twitter bio is far more suited to the blink-and-you'll-miss-it microblogging site: "Wife, mom, grandma, women+kids advocate, FLOTUS, Senator, SecState, hair icon, pantsuit aficionado, 2016 presidential candidate. Tweets from Hillary signed –H." Meanwhile, her Instagram tagline is short and sweet: "Doting grandmother, among other things. #Hillary2016." (As of Tuesday, her Instagram bio now includes a link to her Pinterest account.)

So far, Clinton's Pinterest page has 7 boards and a whopping 54 pins, and each pin carries its own careful caption. "Lily’s pie recipe was already delicious - but the “H” is the cherry on top!", for example, which then links out to a recipe and a description of how the pie came to be, is as Pinterest as Pinterest can be.

In her "Grandmother" board, a photo of daughter Chelsea's newborn, Charlotte, is mocked up with the caption: "September 26, 2014: Charlotte is born."

Alongside the photo is a quote from Hard Choices: “Becoming a grandmother has made me think deeply about the responsibility that we all share as stewards of the world we inherit and will one day pass on. Rather than make me want to slow down, it has spurred me to speed up. As Margaret Mead said, children keep our imaginations fresh and our hearts young, and they drive us to work for a better future.”

If you're looking to repin right away, the pins in "Memorable Moments" and "What We're Fighting For" are solid bets: a selection of photographs from Clinton's life, including her renowned 1995 Beijing speech on women's rights, are shown off, alongside photos with past president Bill and current president Barack.

"People all over the world have asked me: 'How could you and President Obama work together after you fought so hard against each other in that long campaign?' ... But President Obama asked me to serve, and I accepted because we both love our country. That’s how we do it in America," is the caption for her photograph with Obama, taken from behind as Obama rests her hand on Clinton's back.

There's also a nod to Friday's landmark gay marriage decision: A compilation of photographs of gay couples' weddings, with the tagline "All love is equal." Clinton's campaign this time round has been marked by explicit calls for expanded LGBT rights — like gay marriage being a legal right for all Americans, which finally became a reality last week.

Technically, Clinton has been on Pinterest before, thanks to a wildly sexist spoof account from fellow presidential candidate Rand Paul that was finally removed by the website in February. The account featured, among other oddly chosen boards — "Shoulda, Woulda, Coulda," filled with defeated Democrats, for example — a "White House Remodel" board, filled with captions like "LOVE this," "#mirrorselfies," and "lol."

Here, Paul used his rudimental social media know-how to point out that Clinton is, in fact, a woman, and will therefore be running for president not because she believes she's a good choice to run the free world, but because the White House needs a renovation. Good one, Rand.

More like this
Michigan’s Governor Is “Going To Fight Like Hell” To Protect Abortion Access
By Andrea Zelinski
How To Fight For Reproductive Rights, Based On How Much Time You Have
By Courtney Young
LGBT+ Men Fleeing Afghanistan Were Denied Asylum By The Home Office, New Findings Show
By Sam Ramsden
8 Types Of Avatars You Can Customize In The Metaverse
By Ginny Hogan
Get Even More From Bustle — Sign Up For The Newsletter