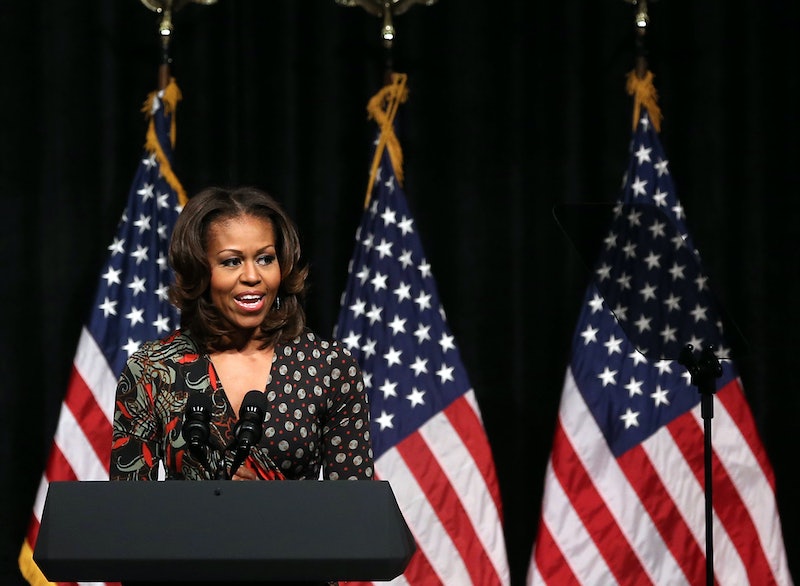 Don't mess with the First Lady. That's pretty common sense, but speaking Tuesday night at a Democratic National Committee fundraiser, Michelle Obama reminded the crowd of her limits when she was confronted by a heckler.

"One of the things that I don't do well is this," Obama told the crowd after a protester began yelling during her speech. The First Lady approached the 'heckler' who was calling for that an executive order to ban discrimination by federal contractors based on sexual orientation or gender identity be signed. "Listen to me or you can take the [microphone], but I'm leaving. You all decide. You have one choice," Obama said.

The audience made it clear they preferred the First Lady stay, and the protester left the event. The LGBT rights organization Get EQUAL later identified the protester as one of its members, Ellen Sturtz, who later told reporters she was “taken aback” by Obama’s response. “I said I want your husband to sign the executive order,” Shultz added, “Her husband could sign this order tonight and protect 22 percent of the workforce in this country.”

The order has been sitting on President Obama's desk since February 2012, but rather than sign it, he's opted to pursue a legislative solution, which may or may not work.

Given the data, signing an executive order barring federal contractors from discrimination based on sexual orientation and gender identity most likely would not be such a big deal in the business world. And now that the presidential election is out of the way, the politics are less complicated.

All that’s needed is the president’s signature.

So while Michelle Obama may have had her reasons for getting annoyed, it's also fair to say that activists have waited long enough to give the president the benefit of the doubt on this civil rights no-brainer. Thanks to the First Lady's reaction, they may have gotten just the press they needed.