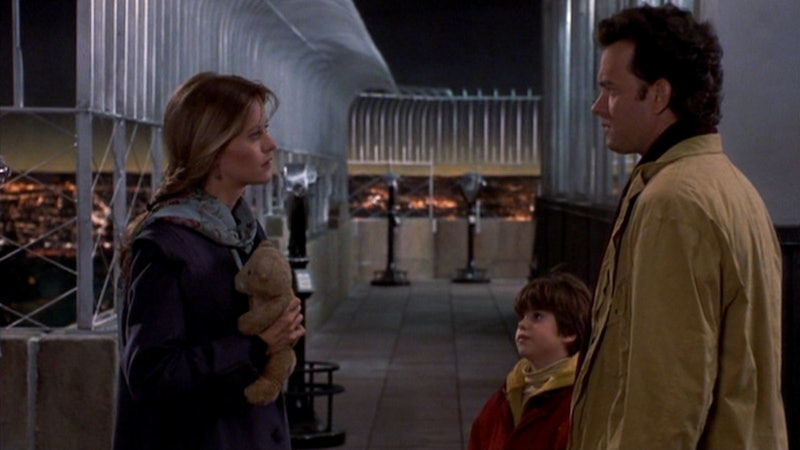 It's been 20 years since the release of the beloved 1993 romantic comedy Sleepless in Seattle. Beloved, that is, by everyone but myself.

As much as I adore the irreplaceable Nora Ephron — and continue to wish I could be the volleyball stranded on Tom Hanks' island — Sleepless in Seattle is most definitely the lesser of the sleepy rom-coms. (While You Were Sleeping for the win!) Mostly because Sleepless in Seattle is a film that asks us to root for terrible people.

Including its main character, Annie (Meg Ryan), a woman more suited for stalking than writing or forming human relationships. And Jonah (Ross Malinger), a son who is far too happy to manipulate his father's dating life. And Jessica (Gaby Hoffman), who might just be the most detestable child to ever appear on film. In fact, widower Sam (Hanks) is the film's only good guy — and his only reward is to enjoy a future undoubtably more frightening than Fatal Attraction. (Seriously, Sam even predicts it.)

But let me elaborate. Here's why you should have nightmares about While You Were Sleeping's horrible, horrible main characters.

Just give him a Zyrtec, and we avoid this whole mess.

Becky (played by Rosie O'Donnell) mails a letter Annie draft to Sam (so... she's okay with her friend cheating on her fiancé?), and tells her employee she'll send her to Seattle for a work assignment. And media wonders how it ran out of money so quickly. Thanks for contributing to the great newspaper decline, Becky.

Obsessed with the voice on the radio, Annie uses the Baltimore Sun's records in order to track Sam down. Annie, did you try the number 1-800 get the fuck back to work?

Jonah Is a Judgmental Beast

Sam's new girlfriend, Victoria (Barbara Garrick), is a perfectly lovely woman who only attempts to befriend and feed Jonah. In turn, Jonah calls Victoria a ho. Where a child would learn that language is not known. Except that it was probably Jessica, who is the worst. (More on that later.)

And, by doing so, cock-blocks his poor, widowed father. I only hope Sam returned the favor when Jonah's in college.

Sam's son demands they go across country to meet a stalker, despite the fact that they are a single-income family.

Then Goes On Expensive Vacation

During a romantic dinner at the Rainbow Room. Here I was thinking you would find gold at the end of the rainbow — not a cold-hearted, terrible woman.

...Then Tells Him Her Plan to Meet Sam

Just go ahead, Annie — continue smiling wistfully while you slowly break your fiancé's heart and force him to encourage you to pursue the man you're stalking. Just continue digging that knife deeper, succubus.

Jessica's Just the Worst Ever

The constant acronyms, the trouble-making influence, and goddammit, will you stop with the awful acronyms, you little brat?!. Thanks for contributing to the rapidly deteriorating English language, Jessica. H and G.