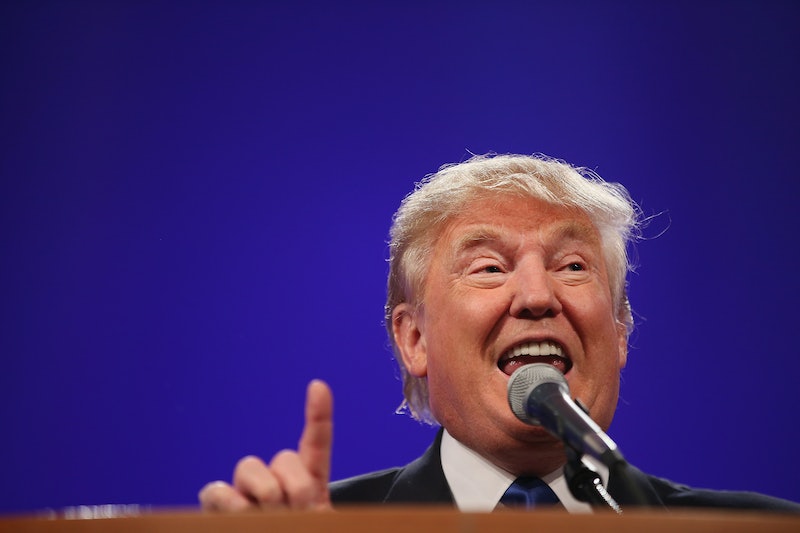 If Donald Trump wants to get serious about his campaign, then he'd better roll out an official logo soon. Hillary Clinton wasted no time, releasing hers the day of her announcement, and it's come to play a major role in her campaign. For someone with such vast wealth, you'd think the Donald would have had one created years ago — if nothing else, just for the fun of it — to have at the ready for the day he decides to run. Well, since you dropped the ball, Donald, others are picking it up for you. The design community at LogoMyWay is making Donald Trump's campaign logo, and the winning design will be chosen through a contest that is expected to have hundreds of entries before it ends. Judging by the current submissions, the Donald is going to have one hell of a logo.

LogoMyWay is a service that helps create logos for companies and businesses by holding contests. It's a pretty great system, because the prize money incentivizes designers to create something solid and the wide variety of entries gives the company plenty of options to choose from. For each contest, the company provides a description of itself and gives the designers a few key points to incorporate into the logo.

Then, as LogoMyWay's 20,000-plus design community goes to work on creating the perfect logo, the company can rate designs and give feedback. At the end of the contest, a winning design is chosen and the creator walks away with a cash prize anywhere of $200 (though LogoMyWay takes a 10-percent operations fee).

In a gesture of generosity and perhaps political support (or maybe just good fun), LogoMyWay has launched a contest on behalf of Trump to come up with a visually stunning, functional, and representative logo for his presidential campaign. The three key points it's listed for their designers are:

What the designers have come up with so far are nothing short of genius. Lo and behold, one of these following designs could — and should — become Trump's official campaign logo.

This One Likens Trump's Hair To A Majestic Bald Eagle

In This One, Trump's Hair Is Literally Made Of Money And He Fires Mexico As A Country

Trump As The Bride Of Frankenstein — Why Not?

This One Turns His Famous Tag Line Around On Himself

So That's Where Nemo's Been This Whole Time? In Trump's Hair? There's Probably An Entire Ecosystem In There

"I'm Fired, But I Will Overcomb" — That's Brilliant

I'm Not Quite Sure What's Happening In This One, But It's Cute

For Those Who Want To Physically Separate Mexico From The U.S. With A Saw, Vote For Trump!

If You Think About It, Trump Really Is Like A Refreshing Summer Smoothie — They Both Melt In The Sun