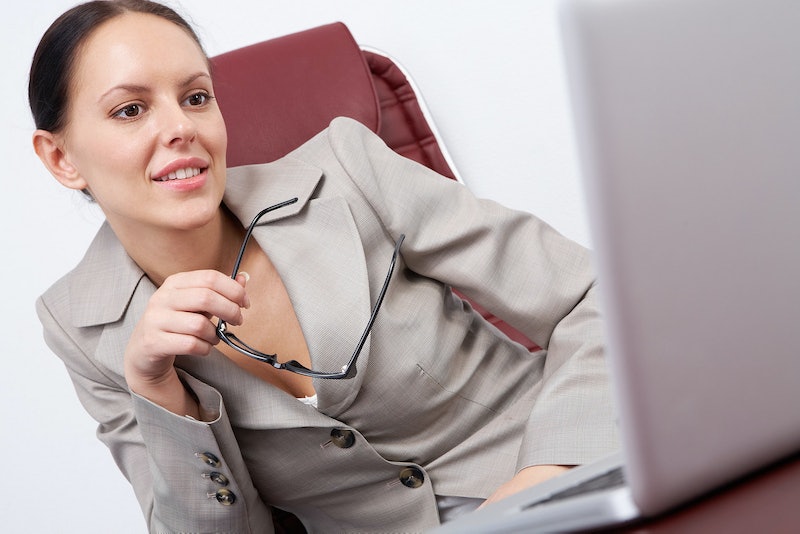 Have you ever wondered if being a female boss changes how others perceive you or whether you're treated differently than male bosses might be? A new study of female CEOs examined just that, and the results are surprisingly heartening: According to "The Female CEO Reputation Premium? Differences and Similarities," your reputation as a CEO doesn't depend on gender. Published by KRC Research and Weber Shandwick, a new media marketing firm, the study was created as an addendum to an earlier report released in March, "The CEO Reputation Premium." The new report examined data gathered by the earlier one about female CEOs, examining their unique experiences in their executive positions and how and if they differed from those of men.

The data collected about the 1,700 female CEOs who participated revealed tons interesting things regarding the similarities and differences between men and women at the top — including the fact that when women have other female role models who are CEOs, they are more likely to want to become a boss themselves (not exactly surprising, but still worth noting). But, since women only make up 23 percent of Fortune 500 CEOs, it seems that actually getting women into these roles is harder than it might seem.

Let's take a closer look at some of the other important findings from the study to see how else female CEOs are fairing in the workplace.

This might be surprising, but the research found that CEOs' reputations within their company don't seem to have much to do with gender. Of those that say that their company's reputation is "very strong," 35 percent of them had a male CEO and 33 percent a female — that is, the percentages were quite close indeed. Furthermore, 38 perent of respondents who reported their CEO as having a "very strong" reputation worked under a male CEO, while those reporting a "very strong" reputation for a female CEO was 36 percent. Chief Reputation Strategist at Weber Shandwick and study author Leslie Gaines-Ross commented on this to Fortune, saying, “Once you get a woman in the top spot, executives perceive them fairly equally.”

Even though female CEOs are perceived relatively the same as men, they still don't aspire to be in leadership positions as much as men do. Only 23 percent of women said globally they wanted to be a CEO one day compared to 32 percent of men who said the same, which is equates to about a 30 percent difference. The difference is even more stark when you narrow it down to just U.S. data, in which only nine percent of women aspire to be CEOs.

3. Women Who Do Want to Be CEOs Are More Likely to Be Millennials

Another key finding: Women who want to be in executive leadership positions are most likely to belong to the Millennial generation. Why? Explains Weber Shandwick in a press release, "[This finding] may be because Millennials are less likely than other females to have hit glass ceilings or to have faced gender discrimination, if only because of the brevity of their experience in the workforce."

4. People Think There are More Female Run Companies Than There Actually Are

Interestingly, the study authors asked survey participants to guess how many companies were run by female CEOs. The average guess came in at 23 percent when in reality, women only head eight percent of companies as CEOs. Women were also more likely than men to put this figure higher. As Fortune put it, "Now all that needs to happen is to turn that wishful thinking into reality." Well said.

When examining the gender breakdown of how much a CEO's reputation matters to executives in terms of job satisfaction, 64 percent of women reported this factor as being an influencer of whether or not they stay at their company, versus only 54 percent of men. Food for thought, no?

More like this
5 Crystals To Manifest More Money
By Megan McCarty
Sandra Bullock, Girlboss Extraordinaire
By Matt Harkins & Viviana Olen
The 'Hocus Pocus' Sequel Finally Has A Release Date & It Makes Total Sense
By Shannon Barbour and Radhika Menon
Your Home Could Seem So Much More Expensive If You Tried Any Of These Cheap Tricks
By Dena Ogden and Sara Brown-Rigoli
Get Even More From Bustle — Sign Up For The Newsletter