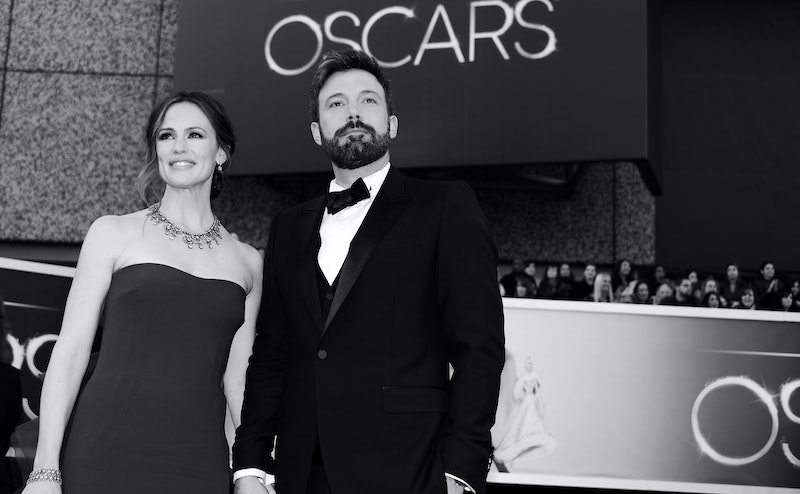 This is it, guys. It's the day we've dreaded for months, but always knew would come. After 10 years of marriage, three beautiful children, and a deluge of breakup rumors in the media, it's official: People confirms that Jennifer Garner and Ben Affleck have split up. Since rumors first started surfacing earlier this year — and Garner and Affleck didn't exactly rush to dispel them — it seemed that a divorce was imminent. And now that it's actually happening, it's even more heartbreaking than I imagined it would be. The couple released a joint statement to the magazine, but unfortunately, it didn't include an answer to the most important question in situations like these: Why did Garner and Affleck decide to break up?

After much thought and careful consideration, we have made the difficult decision to divorce ... We go forward with love and friendship for one another and a commitment to co-parenting our children whose privacy we ask to be respected during this difficult time. This will be our only comment on this private, family matter. Thank you for understanding.

That's it. That's all we're getting. And I don't know why a definitive answer to that question is so important — maybe because it's such a shock that such a solid couple decided to end their marriage. Seeing Ben and Jen together has always made me believe in love just a little bit more, and now I don't know what to do with all of my emotions.

If you're looking for closure like me, I have good news: There are plenty of clues (many of which are basically rumors from the tabloids) that could explain their decision to split. The bad news: Almost every single rumor has to do with Affleck behaving badly. So until they decide to release more info, this is literally all we have to work with.

According to rumor, one of the last straws for Garner was Affleck allegedly becoming less and less responsible with their children -- Samuel, Violet, and Seraphina. Life & Style claims that Affleck was 40 minutes late picking the kids up from school recently, and that events like this have made Garner decide to divorce Affleck and seek full custody. Of all the reasons these two may have gotten divorced, please let it not be for this reason. That would be heartbreaking.

Affleck Is Allegedly Struggling With a Gambling Addiction

Although Affleck has shot down the idea that he's addicted to gambling in the past, those same rumors are resurfacing, and this time, reports attribute Garner's decision to ask for a divorce to these claims. This one doesn't seem as likely, though, especially since Affleck has called rumors like these "bullsh—t."

Affleck Has Supposedly Been Working Way Too Much

This is a reason seems more likely, especially since Garner has been upfront about her husband's busy schedule in the past. Back in March, she told Us Weekly:

Ben is super busy and I'm super happy for him. I chose to stay home this year and just said, 'Go for it babe. Do it all. Do Gone Girl, do Batman, do The Accountant. Do everything.' I want that for him and I'm happy for him. And he says the same to me. Except that he's really busy. But he understands that when I really have to do it, we figure it out.

Sounds pretty solid, right? Wrong. Reportedly, Affleck's passion for his career has turned into "workaholic" tendencies. It makes sense, because for a marriage to work, you actually have to see the other person. Of all the reasons these two may have decided to go their separate ways, this one makes the most sense.

In 2014, Garner told In Style that she and Affleck weren't always working on keeping the romance alive between them as much as they should. That's an important thing to do, especially after you have kids and you're both busy celebs. So it's not unfathomable that this could have killed their spark.

No matter what the real reason was, though, this is obviously a difficult time for them (and for the rest of us). Hand me a tissue, please.

More like this
Long Live Bennifer!
By Allie Jones
Sandra Bullock, Girlboss Extraordinaire
By Matt Harkins & Viviana Olen
Kaley Cuoco & Tom Pelphrey Just Made Their First Public Appearance As A Couple
By Hugh McIntyre
Natalia Dyer & Charlie Heaton's Relationship Is Still Going Strong
By Allyson Koerner and Sophie McEvoy
Get Even More From Bustle — Sign Up For The Newsletter