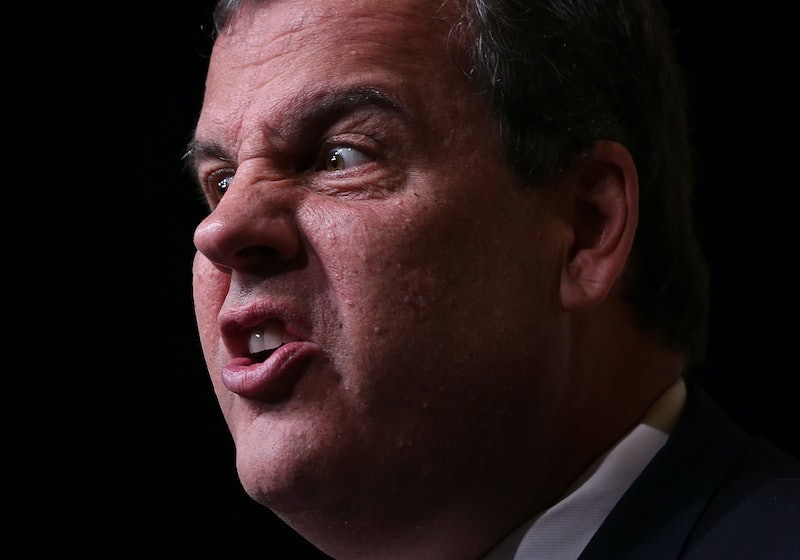 The Republican race for the 2016 presidential nominee is starting to get seriously crowded. On Tuesday morning, New Jersey Gov. Chris Christie announced his presidential campaign at New Jersey's Livingston High School, making him the 14th Republican candidate to do so. "I mean what I say and I say what I mean and that's what America needs right now," Christie said. Obviously, Christie is known for his tell-it-like-it-is attitude — so what is Christie's attitude towards abortion?

In recent years, Christie has declared himself pro-life. In March, Christie supported the Pain-Capable Unborn Child Protection Act — legislation that would protect the unborn fetus 20 months into pregnancy, a number based on when some lawmakers argued the fetus can feel pain.

In his statement to the Susan B. Anthony List, a pro-life political action committee, he expressed his support for the Act:

I am proud to be a pro-life Republican. I believe that every life is an individual gift from God, and that no life is disposable. America is one of just seven countries that permits elective abortions past this point. We can do far better than this. I urge Congress to take swift action on this important issue.

The fact is that I'm the first pro-life governor in the history of New Jersey. ... I'm pro-life [and it] didn't bog me down!

Although he has taken a no-nonsense stance in recent years and is openly pro-life, he hasn't always been this way. According to MSNBC, in the '90s, Christie was actually pro-choice and even made donations to Planned Parenthood. Christie was pro-choice when he initially ran for New Jersey office in 1993. Like Donald Trump, he says he has a personal reason for why he changed his mind. In a 2011 interview with Piers Morgan, he said that while at a prenatal visit with his wife, he heard his unborn daughter's heartbeat.

You know, as to my position on abortion, I would say that a week ago that wasn't a life. And I heard that heartbeat. That’s a life. And it — it led to me having a real reflection on my position. And when I took time to reflect on it, I just said, you know what, I’m not comfortable with that anymore. That was back in 1995, and I’ve been pro-life ever since.

It offended me and my sensibilities. When you take a position on choice, you don't have that in mind … I’m pro-choice, but I think this procedure is reprehensible.

Christie's pro-choice comments were made in 1996 — but remember that part when Christie said he's "been a pro-lifer ever since" hearing his daughter's heartbeat in 1995? Yeah, that simply doesn't add up. His once running mate Richard Merkt told The Daily Beast he doesn't buy Christie's story, calling it the "perfect political story" because no one can really verify it.

Merkt hinted that Christie changed his stance to be a viable Republican presidential candidate. He told Nuzzi:

If I were a cynic, I'd say he may just have been reading the tea leaves and said, "Hmm, if I want to have a future in the national Republican Party, I can’t be a strong pro-choice person."