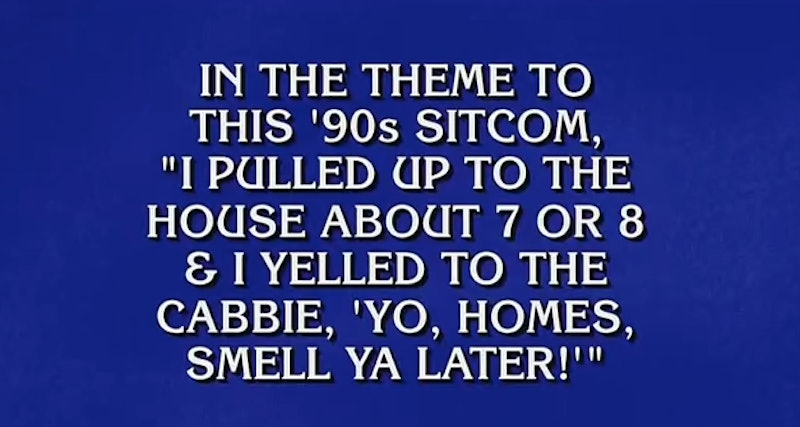 "What is The Fresh Prince of Bel Air?" Monday night on Jeopardy,Alex Trebek rapped The Fresh Prince of Bel-Air theme song, unleashing his rap skills upon the world in an epic question allegedly worth $800, but that was really worth so much more. Trebek is a Canadian, velvet-voiced dreamboat, and, next to a group of nuns, is probably the last person we'd ever expect to hear rapping. In a clue in a TV category, Trebek semi-rapped the theme song to The Fresh Prince of Bel Air, and he was surprisingly awesome at it. Jeopardy has been running on TV since 1964, with Trebek serving as host for 31 years. Whether he is getting bored, or is simply feeling frisky, Trebek got super into the Fresh Prince rap, taking his hosting skills to the next level.

Non-rapper celebrities have a long history of rapping on talk shows and late-night shows, almost always to show how "cool" and "with it" they are. Even though the art form has been around for awhile, rapping is revered as a young person's game, so, when celebrities rap, it is often to appeal to the youth. Trebek certainly spoke to our hearts with this performance, but check out more musical stylings from other unexpectedly hip celebs.

A hearty delivery from a VERY unlikely source. Trebek takes on "smell ya later" with impeccable gusto. I'd love to see him take on the whole song, and even collaborate with Will Smith.

Apparently, Paltrow is a huge fan of '90s hip hop. Four years ago, she took on the NWA hit on the spot, and the world was never the same.

Tyra has many skills: model, actress (who else was obsessed with Live Size!?), producer, and Harvard Business School student, but one thing she definitely cannot include on that list is freestyle rapper. Tyra tries — and fails — to freestyle with Bow Wow.

His delivery is impressive nonetheless.

Summer Roberts released this epic rap video to assert her doctor bonafides while promoting Hart of Dixie on "the C-Dub."

It wouldn't be a list of celebrity raps without the notorious "Natalie Rap." Portman plays against type and goes full badass. "Damn, Natalie, you a crazy chick," indeed.

7. Brian Williams, "Baby Got Back"

While it's not technically him rapping, it is edited so perfectly that you can't tell the difference. Also, LOL when he says "I cannot lie."

Anne Hathaway raps in the style of Lil' Wayne, and it is almost as insane and unexpected as Alex Trebek's rap. Here's hoping she cuts a whole album. Hell, if Iggy Azaela can be a rapper, she can too.