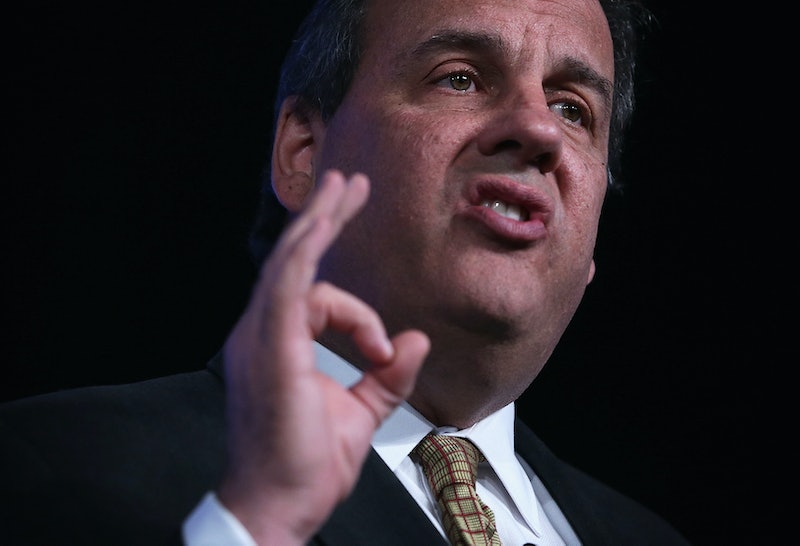 On Tuesday, Republican New Jersey Governor Chris Christie made it official: he's running for president in 2016, joining a crowded GOP field. He's the the second active governor in the race, with two more (Wisconsin's Scott Walker and Ohio's John Kasich) still waiting in the wings. Obviously, you have to draw distinctions in politics — as well as spin a good campaign yarn — and in Christie's case, he's been going all-in on a very familiar story for a while now. Simply put, Chris Christie is Italian, and he'll tell you so.

First, it's worth noting something for precision's sake. Christie's ethnic ties to the homeland are by way of the island of Sicily, an autonomous region of Italy that sits just off the Italian peninsula, in the Mediterranean Sea. Most people have probably heard the word "Sicilian" before, but for avoidance of confusion, it's a good thing to point out — as a fellow half-Sicilian named Chris, maybe I feel a little kinship on this point.

But Christie is unambiguously a bit more into his heritage than I've ever felt, as he's invoked his Sicilian mother Sondra frequently throughout his political career. Here's a sampling of the countless times he's invoked his heritage, often by way of his hard-nosed mother, who passed away in 2004.

Probably the highest-profile instance of either his heritage or his mother coming up in a speech — Christie gave this insight into his background in 2012, while speaking in front of a national audience and a packed RNC marking Mitt Romney's ascendancy to the GOP nomination. He spoke of his mother in the same admiring way he so often does (text as prepared for delivery).

I am the son of an Irish father and a Sicilian mother. My Dad, who I am blessed to have with me here tonight, is gregarious, outgoing and loveable. My Mom, who I lost eight years ago, was the enforcer. She made sure we all knew who set the rules. In the automobile of life, Dad was just a passenger. Mom was the driver.

... Mom also came from nothing. She was raised by a single mother who took three buses to get to work every day. And mom spent the time she was supposed to be a kid actually raising children – her two younger siblings. She was tough as nails and didn't suffer fools at all. The truth was she couldn't afford to. She spoke the truth – bluntly, directly and without much varnish. I am her son.

If there's any criticism to be made about Christie's frequent invocations of his and his parents' heritage, it's probably that he's used it to try to excuse his notoriously short temper, as he did while speaking at the Iowa Freedom Summit earlier this year.

And so, we'll go back to where we started. The direct, blunt, New Jersey stuff, right? Where'd that come from? I have an Irish father, and I had a Sicilian mother. Which means at a young age, I got very good at conflict resolution.

Suffice to say, this is the kind of line you can only get away with if you're a member of the group in question — if he'd played with a similarly tiresome ethnic stereotype about hot-blooded Latinos, for example, it might not have gone down so well.

Speaking with conservative personality Laura Ingraham at the yearly, always-entertaining CPAC in 2015, Christie again circled back to his memories of his Sicilian mother, as detailed by NJ.com. Just over a month after his Iowa Freedom Summit speech, Christie stuck with the same approach.

I'm the son of a Sicilian mother and an Irish father. I got to learn about dispute resolution really early.

When you're sure you've got a winning line, I guess you don't want to change it up too much?

If you're looking for a more focused reflection on Christie's roots, and the history of Italian-Americans in the region, you'd do well to check out PBS' recent documentary on the subject. A localized offshoot of their The Italian Americans series, Italian Americans of New York and New Jersey focuses on the profound influence of Italian culture and immigration on the region, and features interviews with New York Governor Andrew Cuomo, New York City Mayor Bill de Blasio, as well as Christie.

As quoted by the New York Daily News, Christie takes the opportunity to again reiterate his belief that his ethnic background plays into his aggressive, sometimes rude style.

I'm half-Sicilian and half-Irish, and so both of those together are rather a combustible combination. But on the Sicilian side of things, you know, I think the emotions that I have that are very kind of, you know, out on the surface. (They) very much come from that side of the family.

Christie also related a story about his mother's death — one which he's told in public before, but is noteworthy nonetheless. When his mother was dying of lung cancer in a hospital, and Christie took the day off to stay with her, she insisted he return to work, telling him that "there's nothing left unsaid between us." He says this was the last time he spoke to her.