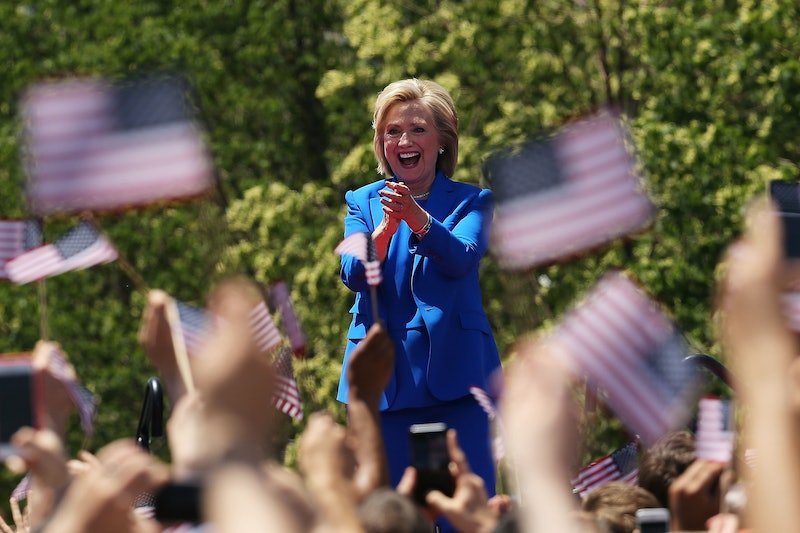 OK, so I've been keeping a close eye on the 2016 candidates' various online offerings, but I might as well stop now, because one candidate just released merchandise to end all other merchandise. After launching a Pride line, Hillary Clinton released Summer merchandise in her online shop on Monday and it completely trumps every other candidates' goods. Sure, her team is clearly trying hard to appeal to younger constituents — the merch looks like it could have come out of an Urban Outfitters — but don't we all stop in Urban Outfitters once in a while to stock up on straw hats and turquoise flasks? Well, now you can just go straight to HillaryClinton.com for the coolest summer gear.

Unlike some other candidates whose names we won't mention [cough, Jeb Bush, cough cough, Mike Huckabee], Hillary's offerings extend beyond — way beyond — the boring old t-shirts, stickers, and yard signs. She really thought about what we as not just voters, but people need. For example? Who couldn't use a beer koozie in the summer when you're barbecuing in your backyard in 90-degree temperatures? Speaking of grilling, you're definitely going to need an apron to keep your Hillary t-shirt stain-free, not to mention a spatula to flip those burgers. Well, Hillary's got you covered, because all of those items, plus so much more, can be found in her new Summer line. Here are all of Hillary Clinton's summer items, ranked.

If you're going to cover your car with political memorabilia, it might as well be stylish.

The same goes for bumper stickers.

Brighten up your tote bag or denim jacket with these retro-style buttons.

These colorful Hillary cups will remind you to stay hydrated (although what you put in them is up to you).

How often are we in need of a bottle opener and have to resort to using a lighter instead? Don't worry, Hillary's here to help you crack open a cold one.

Being political and being edgy don't have to be mutually exclusive. Hillary knows that her voters have an image to maintain, so she's providing tattoos for all your music festival needs.

Who in their right minds would not want a Hillary Clinton spatula?

What's more functional in the summer time than a beach towel? And what better way to show your Hillary support than by lounging at the beach?

"More like Chillary Clinton, amirite?" OK, the lingo might be a little heavy-handed, but those are still sweet beer koozies.

If you thought Hillary Clinton was the kind of woman to stop at one pun, then you'd be very, very wrong. Here's hoping we can all be Grillary Clinton all summer long.