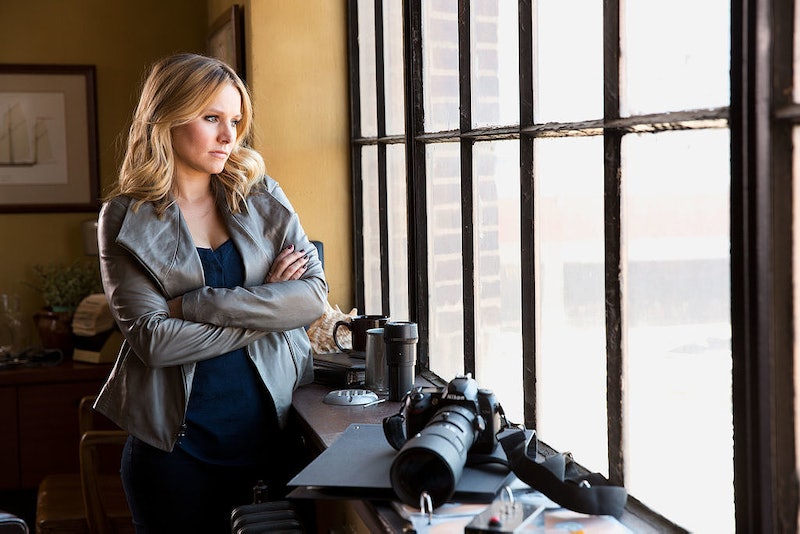 It is no coincidence that counterculture icons often serve as sartorial sages; who better than someone avant-garde and edgy to inspire a style that is radical and revolutionary in all the right ways? And no insurrectionist dominated the airwaves — and the minds of Millennials — quite like Veronica Mars... specifically Veronica Mars' fashion. Feisty, fashionable in a decidedly defiant manner, and facetious to a fault, the hoodie-clad private investigator made her television debut in 2004 for a short, three-season run before marching onto the big screen in a $5,702,153, Kickstarter-funded film.

Of the many characteristics that initially drew fans to the show and indeed, the character herself, Veronica's head-to-toe saturation in subversion remains principal. If the snappy dialogue and emotional undercurrent of the show didn't tip you off to Veronica Mars' singularity and resistance to saccharine pop culture, Veronica's combat boots, spiked hair, and studded leather accessories provided visual reinforcement of the show's intent. Any teen who possessed the faintest spirit of rebellion could relate to Veronica's wardrobe choices, whether the Vivienne Westwood-inspired plaid mini skirt struck a chord or the graphic concert tees hit home. If you remain a loyal Marshmallow regardless of the dwindling likelihood that Veronica Mars will make a triumphant return to the small screen, scroll through for nine fashion lessons learned by viewers who grew up with the show.

1. Layered necklaces are the perfect accent for every look.

In lieu of a stereotypical single-strand necklace, Veronica consistently layers a choker with the diamond drop that was bequeathed to her after Lily's death. The juxtaposition of classic and cutting-edge is nothing short of chic.

2. Cognac leather motorcycle jackets are a major must.

While others trot out their quilted black leather motorcycle jackets, Veronica sported a lighter cognac iteration of the classic, and appears all the more distinctive for her choice. Whether paired with a printed tee or cargo pants, Veronica's signature outerwear is a sartorial ace.

3. When in doubt, add a high-quality camera for extra sartorial cool points.

Veronica's no-nonsense clothing may make a statement on its own, but the addition of a professional-grade camera with a lens that could double as a weapon clinches the look every time. Who knows when such an accessory might come in handy?

With her olive-hued cargo pants and army green hoodies, Veronica is the very embodiment of utilitarianism as a lifestyle and as a sartorial statement. One couldn't very well track a killer's movements, outrun numerous assailants, and catch a campus aggressor in a mini skirt and Louboutin's, after all, even if said uniform would have been Lily-approved.

5. A fitted black tuxedo blazer is the grown-up version of combat boots.

In the space between the end of the small screen series and the show's film adaptation, Veronica steps into a life of adult responsibilities, complete with a career that requires a modicum of dress sense. Instead of abandoning the defiant attitude behind her trusty combat boots and army-inspired garb completely, Veronica adopts armor of a different sort — the crisp, chic fitted black tuxedo blazer.

6. 50 Shades of grey is more than a book — it's a sartorial lifestyle.

Throughout the Veronica Mars series, costume designer Salvador Perez played with an entire spectrum of neutral hues to further enhance Veronica's seditious streak and often murky moods. In addition to providing aesthetic resonance, and hinting at Veronica's place in the grey area between social strata, the perfusion of gray hues is also incredibly striking.

7. Hoodies are always the right choice.

Marshmallows may dither between their adoration of Piz and their devotion to Logan, but the show's viewership is eternally loyal to hoodies, thanks to the principle set forth by Veronica.

8. Don't underestimate the power of denim.

Veronica doesn't simply rely on bulldog Backup and her taser to exert an air of dominance; in fact, her denim-laden getups do so as well. Pop a jean jacket over the top of an already urbane ensemble, and you can expect your very own coterie of fashionable misfits to simply materialize in awe of your chutzpah, as they do for Veronica.

9. Quirk wins out over twee any day of the week.

Taylor Swift's twee style may cause sartorial critics to swoon, but Veronica's quirk-laden looks pack a major punch. Whether sporting a pattern-heavy sweater vest to Neptune High or an '80s-inspired tulle skirt and fishnets to a dance, Veronica's idiosyncratic getups are visually intriguing and utterly unique.