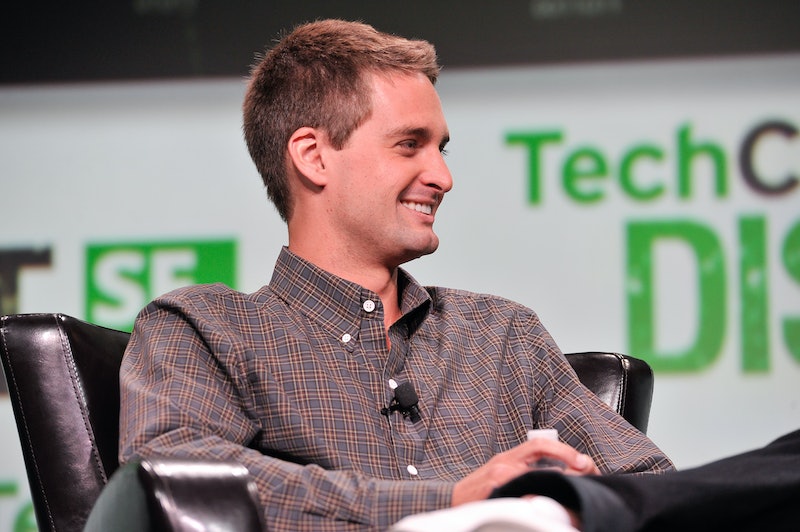 Looks like Snapchat pulled a Facebook... by which we mean, the billion-dollar idea came from the founder Evan Spiegel's college classmate, who didn't actually get any credit (or money) when the company hit the big time. Now, Mark Zuckerberg’s desire to buy the pix-messaging app suddenly makes a whole lot more sense: The Facebook CEO sensed a kindred spirit in Snapchat co-founder Spiegel.

In a deposition video acquired by Business Insider, the 23-year-old Spiegel admits that the entire idea behind Snapchat came from Reggie Brown, a former Stanford classmate and frat brother. Like the Winklevoss twins before him, Brown is now suing Spiegel and Bobby Murphy, the app’s other credited co-founder, with the claim that Brown came up with the idea for Snapchat and was promised a 20 percent stake in the company. Then, says Brown, he was sidelined by Spiegel and Murphy, who created Snapchat on their own and gave Brown nothing. He's asking for a 30 percent cut of profits.

The video was taken during the “discovery” phase of the lawsuit: basically, when attorneys from both sides attempt to get as much background information as possible to prepare for the case. Part of this process involves videotaping interviews with the plaintiffs and defendants, and that’s when Spiegel made the blunt admission that Brown came up with the whole idea of Snapchat. Which Facebook recently tried to buy for an absurd $3 billion.

“Reggie may deserve something for some of his contributions,” Spiegel said in another damning clip.

The most likely outcome is that the two parties will reach a settlement. This is exactly what happened in the Social Network — oh yeah, and in real life — when Zuckerberg was sued by the Winklevoss twins. The Winklevii were classmates of Zuck's at Harvard and apparently helped develop the idea of Facebook, but received no profits or ownership once it became successful.

More like this
Camilla Paid Tribute To The Queen In A Heartfelt Video Message
By El Hunt and Sam Ramsden
Why TikTok Is Flooded With Controversial Videos About "Pick Me Girls"
By Courtney Young
This TikTok Song About An Unrequited Romance Has FYPs In Shambles
By Emma Carey
On TikTok, "Cbat" Has Been Named The Worst Sex Song Ever
By Lexi Inks
Get Even More From Bustle — Sign Up For The Newsletter