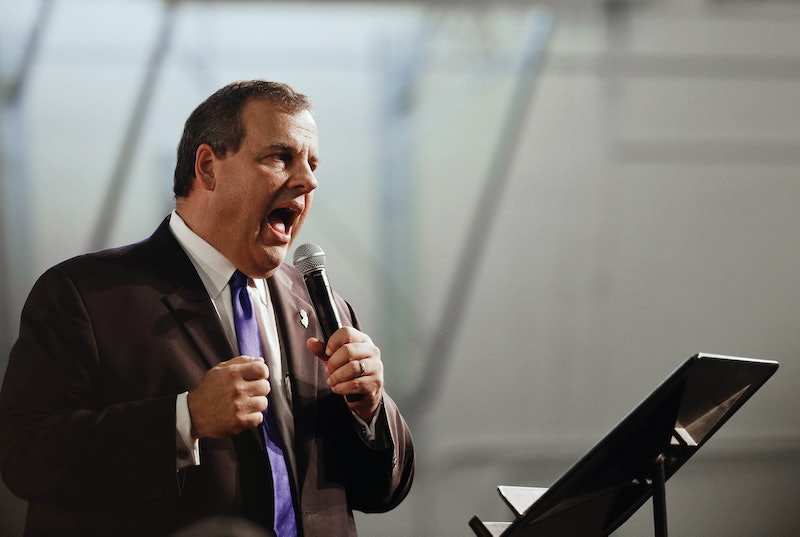 On Tuesday morning, New Jersey Gov. Chris Christie announced his presidential campaign. Christie made the announcement at his alma mater high school in New Jersey, promising to be honest "whether you like it or not." So, speaking of honesty, what does Christie think about marijuana?

Well, his attitude might be blunt, be he sure doesn't endorse blunts.

In April, Hugh Hewitt, host of a conservative radio show, asked Christie what he thinks about Colorado and Washington legalizing marijuana. Christie responded that if president, he would not allow marijuana legalization.

Marijuana is a gateway drug. We have an enormous addiction problem in this country. And we need to send very clear leadership from the White House on down through the federal law enforcement. Marijuana is an illegal drug under federal law. And the states should not be permitted to sell it and profit from it.

Many argue that this claim that marijuana is a "gateway drug," aka a drug that leads to more serious drug use, which has never really been proven.

In June, Christie reiterated his stance on marijuana on Face the Nation. In the interview, he declared that if president, he would prosecute states like Colorado and Washington where marijuana is legalized — something that according to The Huffington Post, Obama has been clear about not doing.

When it comes to medical marijuana, however, Christie takes a different stance. In September 2013, Christie signed a bill in New Jersey that permits expanded access to children who medically need marijuana. Nicknamed "pot for tots," CBS News reports that New Jersey father Brian Wilson wrote to Christie urging him to approve the bill that would allow treatment of his 2-year-old daughter's severe epilepsy. Christie said in a statement, "This new law will help sick kids access the program while also keeping in place appropriate safeguards."

Basically, Colorado and Washington better look out if Christie becomes president. But while Christie is strongly against the use of recreational marijuana, it's nice to know he's got a soft side when it comes to medical use.