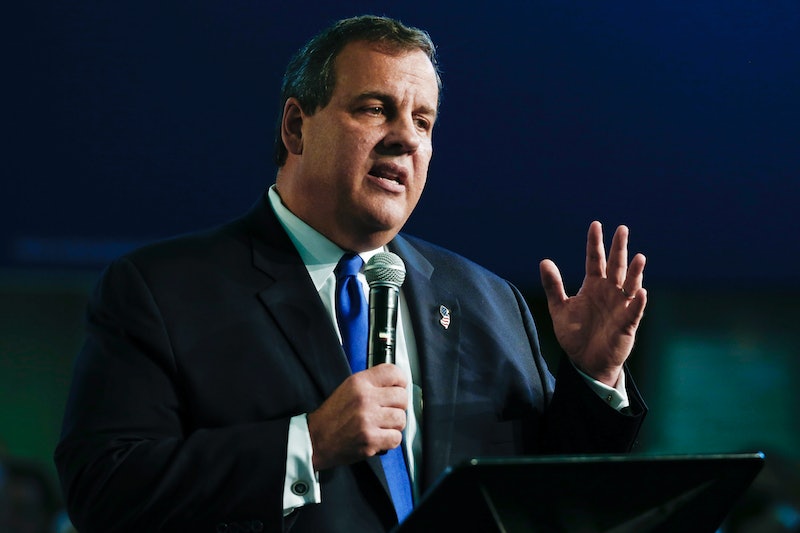 So, Chris Christie is running for president. This isn't a surprise, really, although based on the dire state of his current poll numbers, maybe it should be. But everyone pretty much knew that Christie would run, as he went through all the motions — conservative event speeches, trips to New Hampshire, the whole deal. It was, basically, entirely predictable. Just as predictable as the slew of jokes about his weight that have followed him every step of the way. So let's agree to be better: stop making Chris Christie fat jokes, no matter what you think about him.

I speak from a certain degree of personal experience, being rather overweight myself, but I've never had to weather the amount of mocking and derision about it that Christie has. Throughout his public life, he's been taunted by plenty of anonymous internet trolls, of course, but the extent of it runs much deeper: liberal comedians, media publications, even his political rivals have tried to leverage his weight against him, in pretty gross fashion.

For what it's worth, he's claimed before that it doesn't bother him, and maybe that's true. But if it isn't, he might not feel the liberty to say so, for fear he'd be accused of oversensitivity — a major detriment in a Republican primary, I'd wager.

So, in spite of the fact that I have a pretty profound distaste for his politics, his manners, and his ambitions, I'll argue the point for him.

Ostensibly Liberal Comedians Do It

I must say, few things are as hackneyed, tired, and (perhaps most crucially) unfunny as a fat joke. They're predicated entirely on the barest, most base recognition of visual stimuli, with not a shred of cleverness to be found. Hey, look at the fat guy! Check out that fat chick! Guffaw, chortle, repeat.

And when it comes to Christie, a conservative governor who liberal-minded entertainers have plenty of credible reasons to object to, it seems some typically left-leaning comedians can't resist going for that low-hanging, rotting fruit.

One of the more gleeful offenders in this respect is Bill Maher, the longtime stand-up comedian and host of HBO's Real Time With Bill Maher. Maher seemingly can't resist any chance to poke at Christie about his weight, a tiresome routine if ever there was one.

His audience tends to eat it up, which shouldn't come as too much of a shock — as studio audiences go, his most closely resembles a roomful of trained seals. Some fans on social media sometimes aren't so receptive, however.

The Media Does It

Who could forget TIME's infamous cover featuring a Christie silhouette in profile, mouth agape, with the words "The Elephant In The Room" alongside? It may not have been quite as bizarre and frightening-looking as The New York Times' infamous "Planet Hillary" image, but it was no less tacky and rude.

Individual members of broadcast media have gotten in on the act, too. MSNBC's Chris Matthews provided a shameful example during a public appearance at a Philadelphia magazine event back in 2013, joking that Christie was so fat he probably crushed his wife in bed.

Why people feel the license to talk this way — especially Matthews, who's notably not a comedian, or, in his public life, the least bit entertaining — I'm not quite sure. Matthews did conclude by expressing a fondness for Christie, but it rings a little hollow right after he went out of his way to spontaneously shame the man's sex life.

Social Media Does It

Not much shock here, obviously. If you want to spend a few hours being bored and depressed, punch "Chris Christie fat" into your Twitter search bar and let the results fly.

Of course, some people do seem to get it — stick to attacking policies, not the girth of a candidate.

And They Should All Just Cut The Crap

A lot's been said and written about fat-shaming and its caustic effect on people who're overweight, whether about Christie specifically or just everyday people. NPR's Linda Holmes wrote a particularly moving piece about this last year, discussing the plight of having a core internal, emotional vulnerability sitting right out on the surface, where everyone can see it.

But to a certain extent, I don't even feel as though that level of deep, clear-headed analysis should be necessary here. If you're a comedian, get the hell over it. Your Chris Christie fat jokes — really, your fat jokes of all stripes — are not funny. They are trite. Hack. They may get laughs sometimes, sure. But just as you might stick up for a joke that didn't get laughs, a particular audience's reaction is not necessarily a sign of a joke's worth.

If you're in the media, my god, show some professionalism. If you want to take a swipe at the freshly minted GOP presidential candidate, how about some coverage of his state's faltering economy, or his history of bullying behavior in public? (Relatedly, I'd imagine having the whole world jeering about your body makes you want to lash out sometimes).

And if you're just a garden-variety, otherwise good-natured person, please, I beg of you — clean up your act. There's a lot to talk about in any presidential campaign, even more so when the candidate in question is a sitting governor. The man has a five-year record as a state's chief executive to parse.

And, while nothing I've written in any way depends on this, he isn't even that fat anymore — he's clearly taken aggressive control of his health and his future, having lost a visibly huge amount of weight since undergoing lap band surgery in 2013.

Again, it wouldn't matter if he hadn't. All it means is that in addition to being lazy and needlessly cruel, Chris Christie fat jokes aren't even accurate anymore.

In closing, I'll say this: according to the Centers for Disease Control, more than one-third of American adults are considered obese. Far more than that figure, logically, have or will struggle with weight throughout their lives. In other words, whatever perception you're under, this isn't some distant phenomenon you can taunt without potentially hurting people close to you, people you care about.

Think about how the overweight people in your life might feel to see you tweeting of posting on Facebook about how hilarious Chris Christie's fatness is — because remember, you're not attacking him politically. You're singling out one of the very few things he actually has in common with those friends. In short...

I couldn't have said it better.

More like this
Twitter Can’t Get Enough Of The WAGatha Christie Trial
By Nola Ojomu
Michigan’s Governor Is “Going To Fight Like Hell” To Protect Abortion Access
By Andrea Zelinski
How To Fight For Reproductive Rights, Based On How Much Time You Have
By Courtney Young
LGBT+ Men Fleeing Afghanistan Were Denied Asylum By The Home Office, New Findings Show
By Sam Ramsden
Get Even More From Bustle — Sign Up For The Newsletter