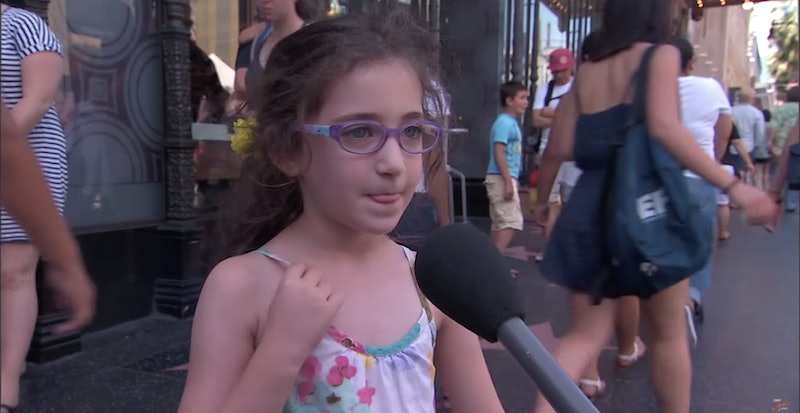 Now that same sex marriage is legal across the U.S., we've all had time to absorb the news, celebrate, and think about next steps for the LGBT movement. Jimmy Kimmel knows that many hands have been wrung wondering how they might explain same sex marriage and relationships to the children in their lives, worrying that children wouldn't understand. Well, as always, kids are a lot more astute than we give them credit for, proven yet again by Jimmy Kimmel when he asked kids about gay marriage. Their responses are on point and totally hilarious.

For a long time, conservatives have argued that same sex marriage is harmful for children and families, and even SCOTUS' ruling on same sex marriage focused quite a lot on the desire to create a traditional home for children. Well everyone can calm down and sleep easy tonight, knowing that the kids are going to be alright. Turns out, they already have a pretty good grasp on marriage, homosexuality, and apparently alimony...? Yep, kids can be smart, intuitive, and incredibly funny, even about politics.

But here, I'll let the kids tell you what they really think about all of this same sex marriage business.

Can You Tell Me What Gay Marriage Is?

Kid answer: "Um, it's when two men and two women get married?" Follow up question: "So is it when four people get married?" Kid answer: "No! *giggles adorably*" Yep, well, that's basically all there is to it. Why does anyone think this is a difficult concept for kids to grasp? It's basically simple addition! A+ for you, little sister.

When Should Two People Get Married?

Kid answer: "In the afternoon." He's totally right! I mean, come on, nobody really likes going to a morning wedding. Especially not little kids!

Do You Think Anybody Should Be Able To Get Married?

Kid answer: "If you're old enough." Ding ding ding! This little lady gets it.

Why Don't You Want To Get Married?

And not a single kid cried or seemed to question the idea of family or community! So maybe anyone who refuses to support gay marriage just needs to accept that kids are fine with it and stop blaming children for their own discomfort or confusion about the issue. Let it be officially known across all 50 states that children are fully capable of having a totally age-appropriate understanding of all marriages, and that some of them really know how to prioritize their finances.

More like this
36 Influential AAPI Voices On Pride, Power, & Progress
By Faith Xue
The Church Of Scotland Votes To Allow Same-Sex Marriages
By Sam Ramsden
Here's How To Practice Self-Love In Small Ways Every Day
By Mackenzie Sylvester
'Heartstopper’s Kit Connor Revealed Why He Doesn't Label His Sexuality
By Nola Ojomu
Get Even More From Bustle — Sign Up For The Newsletter