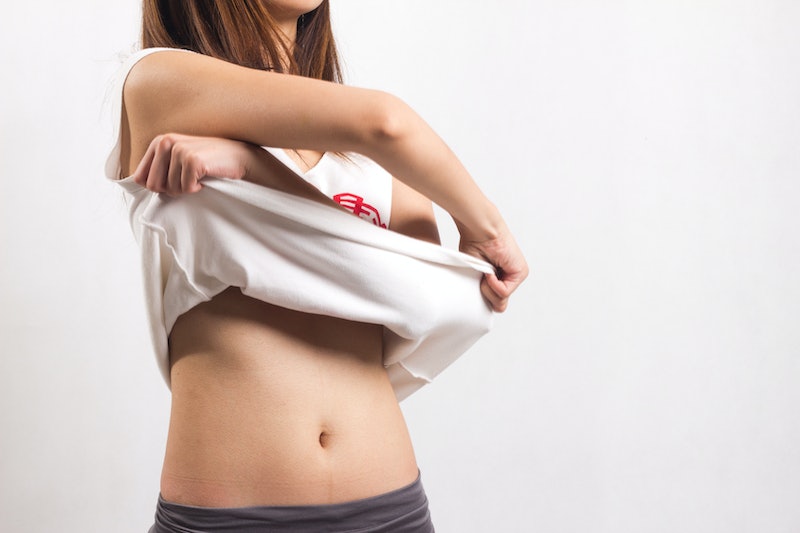 I have big boobs, which you may not know unless you've ever seen me naked or in a bathing suit. It's among my life's primary preoccupations/missions (aside from tasting every kind of cheese ever made) to make my chest seem as small as possible, whether that is done by wearing constricting bras, buying baggy shirts, or applying garish makeup so people don't pay attention to anything below the neck (OK, I don't do that last thing). I'm so self-conscious about my breasts — they are weighty and cumbersome and sometimes move as though they have a life of their own, and they don't look like the idealized images that show up in movies or on Victoria's Secret runways. But whose do, anyway? I'd like to personally thank the anonymous blogger behind Bare to Bush for reminding me that those images are not realistic, they are not ones I should be comparing myself to, and they should not be an impetus for disguising my chest in the way I'm wont to do.

Bare to Bush, which began as a documentation of the blogger's experiment in growing back her pubic hair, recently published posts titled "The Reality of Nude Photos" and "How Breasts Can Look," both of which demonstrate that the same set of boobs (and for that matter the same set of hips, legs, and abs) can look radically different depending on how the light hits, how the camera is angled, how the back is arched. Turns out maybe my boobs are perfectly fine? Excuse me while I take off all this duct tape.

You can find the (NSFW) images here at Bare to Bush.