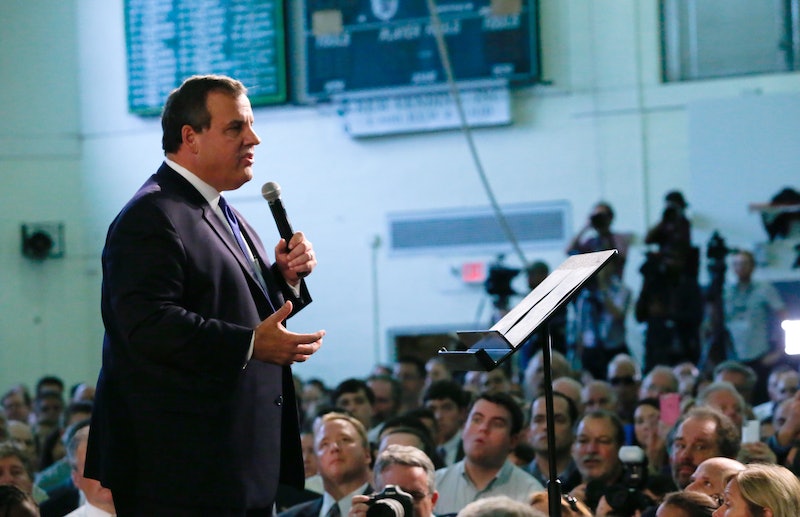 Ask any member of the GOP field whether global warming is man-made and they'll reluctantly agree that, sure, the climate may be shifting, but it's not our fault, and top-down mandates ruin the economy. Or something like that. Push them to take a stance on the very real issue of climate change, and they'll more than likely tell you how they're "not a scientist, but..." For the most part, the Republican Party is of one unified front when it comes to EPA regulations, NASA numbers, and National Geographic exposés — that is, of course, with the exception of newly-minted Republican presidential candidate Chris Christie, whose views on climate change veer far from the beaten GOP path.

At an early fundraising stop in New Hampshire in May, the New Jersey governor laid out a starkly different view on the divisive topic of climate change. "I think global warming is real, I don’t think that’s deniable," said Christie, according to MSNBC reporter Aliyah Frumin. "And I do think human activity contributes to it."

Such bold statements fly in the face of conventional GOP wisdom. Republicans often fail to focus on the science, but instead direct their energy toward reputable discussion points like the economy, illegal immigration, or the rising crisis in the Middle East — and that's not necessarily a bad thing.

As Talking Points Memo pointed out that same month, Christie hasn't changed or shifted his stance in response to his candidacy either, keeping in line with his public views from 2010, when he told a town hall audience in Toms River, New Jersey:

I can’t claim to fully understand all of this. Certainly not after just a few months of study. But when you have over 90 percent of the world’s scientists who have studied this stating that climate change is occurring and that humans play a contributing role it’s time to defer to the experts. ... We know enough to know that we are at least part of the problem.

But of course, that doesn't necessarily mean Christie's planning on doing anything about it. When given the opportunity to curb greenhouse gas emissions in his own state, as the New York Times reminded everyone on Tuesday, Christie buckled under typical GOP pressure, pulling his state from the Regional Greenhouse Gas Initiative (RGGI) only a year after his progressive environmental statements. Last fall, Christie pushed back against attempts to rejoin the RGGI, a Northeast regional carbon dioxide-capping program that limited the amount of greenhouse gases emitted by local power plants, calling the initiative a "completely useless plan."

So what changed his mind? According to Christie himself, the RGGI was "inefficient" and "unfair" to New Jersey citizens, since not all the East Coast states had pledged to be a part of the measure. But many suspected that Christie's jarring actions, which came under heavy scrutiny by legislators who alleged he had not followed protocol in ejecting the state from the initiative in the first place, was a last-minute move to save his own place in the Republican Party.

As the Times reported, Christie's initial pullback from the RGGI came at the same time that he was exploring a potential 2012 presidential bid. Given his already progressive statements on climate change, Christie allegedly balked after conservative advocacy group Americans For Prosperity (AFP) began pouring money — funded largely by libertarian billionaire brothers Charles and David Koch — into campaigns meant to stifle GOP politicians who dared step out of line.

"Christie withdrew his state's participation in the RGGI in 2011, not coincidentally the same year he first began making noises about running for president," wrote one Daily Kos op-ed columnist last September. "At around the same time, he stopped speaking publicly about climate change, for fear of antagonizing the Kochs and derailing his ambitions."

Whether or not the allegations were true, Republicans, for the time being, at least had one less green advocate to worry about. With Christie's promising personal views on the matter, more moderate Republicans may have some glimmer of hope left in the New Jersey governor, but with the field of GOP hopefuls growing larger by the week, and the fight for billionaire financing a steep chase, the luster is all but gone.