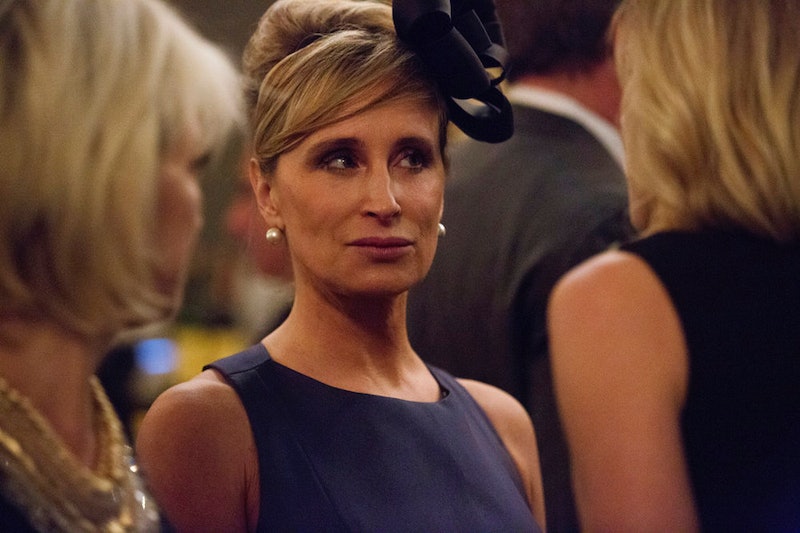 It's not a Real Housewives vacation unless someone completely loses it. On this season of Real Housewives of New York , Sonja Morgan was the poor soul that was confronted by the entire group of Housewives while on vacation in Turks and Caicos. It's not like we didn't see it coming, since the entire season was building up to a huge fight it seemed, but I didn't see this level of confrontation coming. I think the Sonja confrontation put Scary Island to shame (sorry Kelly Bensimon).

Many of the women on Real Housewives of New York have had an opinion on Sonja's drinking habits on the show. During the first week on the island, Bethenny confronted Sonja about her habits. Sonja didn't respond very well, but Sonja rarely does respond well when people come to her with criticism of her life (she's an adult woman, I get it).

On Tuesday, while talking to Ramona about Sonja, Bethenny said "Who am i to say someone is an alcoholic," which Ramona took as Bethenny saying Sonja was an alcoholic. So what did Ramona do with that information? She told Sonja what Bethenny said. And that's where it got ugly.

I was actually excited to see Ramona talk to Sonja on the beach. Ramona seems like a new woman this season — for the better — and I thought everything she had been saying about Sonja behind her back was finally going to come to light, friend-to-friend. But, instead of telling Sonja what she thinks about the situation, Ramona told Sonja what everyone else was saying, leaving out all the things she has said about her best friend.

Sonja's reaction was as expected. She freaked out that people were talking about her. I've never seen Sonja as mad as she was at the Turks and Caicos beach house, and I hope people use that moment as a reminder to never cross Sonja. She threatened to reveal things about her cast mates, she said she was sick of being nice to the other women, she even screamed "get out of my s—t."

After that blow-up, everyone vowed to not talk about Sonja. It didn't last long, but Sonja wouldn't know because she spent the day alone, at the beach house, working out in a sundress and wedges. As only Sonja Morgan would. And while it seems like everyone is trying to just forget about the incident, you know this is not the last we hear about this situation.

And for that reason I say to the women: May the odds be ever in your favor.