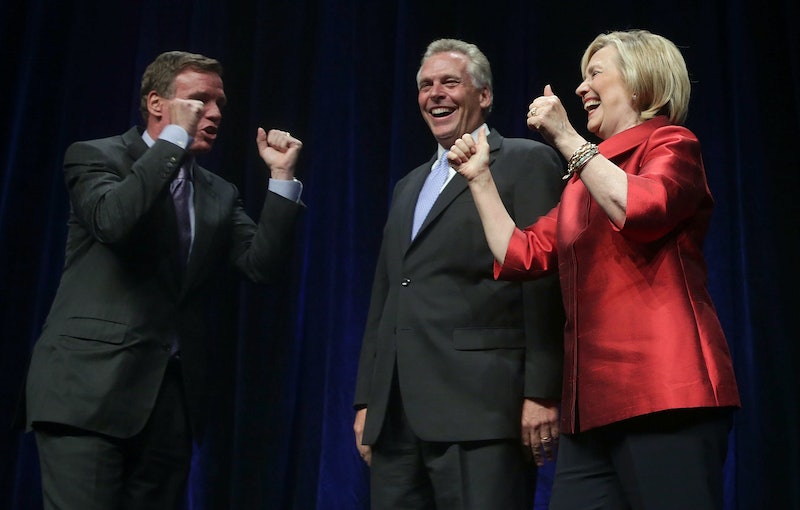 The second batch of emails from former Secretary of State Hillary Clinton's private email server have gone public, and with it comes a slew of serious talking points, urgent agenda items, and concerned commentary on media publications. But not all of it was so bad (go ahead, Hill, you can take a breather). Among the burden of State Department emails were scattered conversations about technical malfunctions, meeting mix-ups, and lunch plans. And while the bulk of the newly released correspondence will likely be scrutinized to death over the next several weeks, the handful of hilarious emails between Clinton and her staffers will at least provide an insight to the former Secretary's human-side.

In one particularly humanizing email correspondence between Clinton and longtime staffer Huma Abedin on Sept. 16, 2009, the two discussed briefly the need to find a delicious meal, of all things. "Where are we lunching?" queried Clinton. Abedin answered that she was waiting in "the cafeteria, sitting in the outside courtyard," at which point Clinton pleads, "Help guide me where to get something good to eat!"

Similarly casual exchanges, though difficult to siphon from the mass of serious correspondence, also ranged from personable and polite to outright (and unintentionally) hilarious — giving the public an inside peek at the amusing dialogue that went on behind State Department doors. Here are just some of Clinton's most entertaining.

In a short back and forth between Clinton and Abedin in December 2009, Clinton seemed to have trouble figuring out why her calls weren't coming through.

"Just pick up the phone and hang it up. And leave it hung up," suggested Abedin, trying to explain to Clinton that the fax line was interfering with a departmental phone call.

It's okay, Mrs. Clinton, we've all been there.

In a July 17, 2009, email from then-National Security Council spokesman Tommy Vietor, Vietor expressed gratitude for a State Department-branded sling given to him by the former Secretary herself after the spokesman injured his shoulder.

"I am now the bell [sic] of the ball in the lower press office," joked Vietor. See, that's how you do "Get Well Soon."

According to an email plucked by The Guardian's Washington bureau chief Dan Roberts, who spent most of Tuesday evening scouring the released missives for something juicy, the former FLOTUS revealed that, sometimes, all you really need to soothe you is a glass of iced-tea.

"... Favourite so far just has this in subject line and nothing else: 'Pls call Sarah and ask her if she can get me some iced tea'," tweeted Roberts on Tuesday. Chalk it up to all those years living down south in Arkansas perhaps?

Listen. Sometimes you're exhausted and you just don't want to reply to your emails, especially when they're long-winded and evocative. This is when text-slang comes in particularly handy.

In response to a glowing PR review of her visit to NBC's Meet the Press on July 31, 2009, which, among other things, cited her ability to bring viewers to tears and expounded on how quickly she had adapted to her role as Secretary of State, Clinton simply responded:

In an email dated Dec. 11, 2009, the former FLOTUS proved that she like, totally has inside jokes too, y'all. Setting up an over-the-phone meeting with "Tom" (likely Clinton's aide, Thomas Nides), Clinton joked,

By the way, I'm still laughing about the yurt!

Okay, we know a yurt is a Mongolian nomadic tent, but what happened to it? Where was it? Why were you laughing about? Did someone have a yurt somewhere on Capitol grounds? I have so many questions.

An April correspondence between aide Jake Sullivan and the former Secretary showed just how funny Clinton could be — in private, of course, what with much of her job depending on diplomacy and polite conversation. Sullivan, explaining the preferred terminology for visiting European officials wrote:

I'm being told — and still trying to verify — that as of last week, we've succumbed to the Europeans' preferred term. That there was interagency discussion of this, and that going forward, we will join the rest of the world in calling the P5+1 the E3+3.

Clinton, confused, inquired as to who the "E" and the "3" in the phrase actually were, to which Sullivan responded:

Not missing a beat, Clinton quipped: