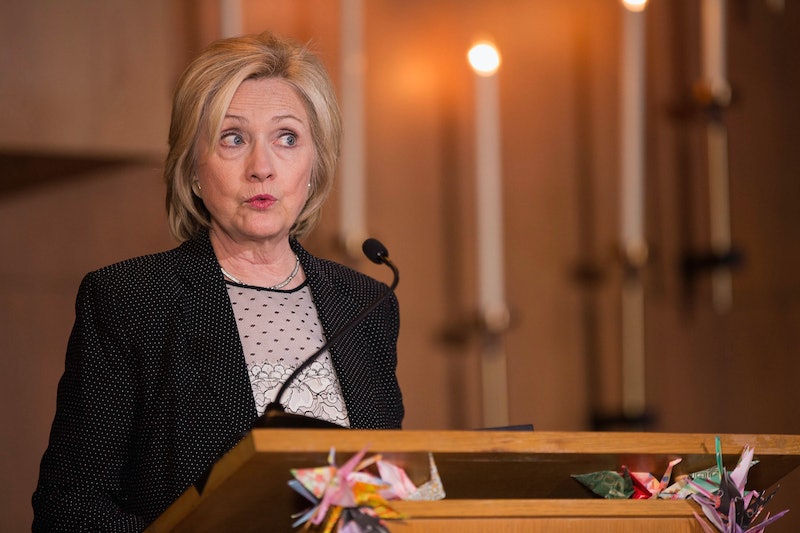 On Tuesday night, the State Department released the second round of Hillary Clinton emails that were pulled from the private email account she used during her time as secretary of state. The emails, which are all dated around 2009, the first year of her tenure, were ordered to be released by a federal judge, amongst concerns regarding the ethics of using a non-government account. The 55,000 pages of correspondence are required to be released in batches each month. The latest round was released at 9 p.m. ET the night before the deadline, and the nation was fast at work combing through the dozens of emails for any reference to the Benghazi attacks.

The State Department swears the late timing was not done in order to underscore the story, but rather because they just didn't have their act together. "We all recognize that turning in our homework at 9 o’clock the night before is probably not ideal," said State Department spokesman John Kirby. "This is really a function of physics for us. We have a lot of emails to get through. … That’s what’s driving the time."

Although the majority of the emails contain little information of interest, some small details have been revealed that show Clinton's personality. The latest batch contains answers to small questions (who is twittering on the secretary's behalf?) while others shed light on larger questions. One of the biggest revelations of the email release is that multiple White House aides and administrators knew that Clinton used a personal email address, such as Chief of Staff Rahm Emanuel, campaign chairman John Podesta, and former Obama strategist David Axelrod. The latter has previously denied knowledge of Clinton's personal email use.

Other emails show that Clinton and her staff played large roles in conversing with journalists and guiding the angles of certain stories regarding the Obama administration. An email with Ben Smith, the now-editor of BuzzFeed, shows that the Clinton staffers managed to talk him out of his original thesis.

A recurring theme within the emails is Sidney Blumenthal, the controversial former Clinton adviser who had been barred from joining Clinton's State Department team by the White House. Though Clinton has stated his advice was unsolicited, the correspondence shows multiple exchanges and potentially reference Clinton's efforts to bring Blumenthal onto her staff. Two separate emails from Cherie Blair and Brian Greenspun (Bill Clinton's old college roommate) showed the pair lobbying on behalf of foreign nations and attempting to convince Clinton to set up meetings with Qatari and the Israeli representatives.

One exchange highlighted Clinton's limited access to President Obama, who she refers to exclusively as POTUS, and even drew a comparison to former President Nixon.

"In thinking about the Kissinger interview, the only issue I think that might be raised is that I see POTUS at least once a week while K saw Nixon everyday," Clinton said. "Of course, if I were dealing with that POTUS I'd probably camp in his office to prevent him from doing something problematic.”

The emails also showed a humorous side of Clinton that helped humanize her and allowed potential voters a unique peek into her life. We also get to see her whims and unprepared thoughts, such as repeated wondering about when and where to get lunch, or what kind of carpet the Chinese hotel used (because she would love to get some). One delightful email is titled "Apples" and shows Clinton wondering about whether she can get some for personal use. It isn't clarified whether she means Apple products or the fruit.

We also see Clinton's chipper, brisk way of talking. One (slightly adorable) email read, “I heard on the radio that there is a Cabinet mtg this am. Is there? Can I go? If not, who are we sending?” Another email showed her asking for a Bible verse to be typed up in "BIG" font and printed out for her.

However, the true gem of the email release were the repeated references to Clinton's broken fax machine. Her ongoing feud with the machine and her inability to figure out how to use it are really the only emails you need to read.

Though the ongoing monthly release of emails is sure to put a damper on Clinton's otherwise energetic presidential campaign, unless something truly damning comes out, some of these emails may help win her favor. It's a rare glimpse into a politician's life, which humanizes the candidate, showing that she cracks jokes and struggles with technology just like the rest of us.