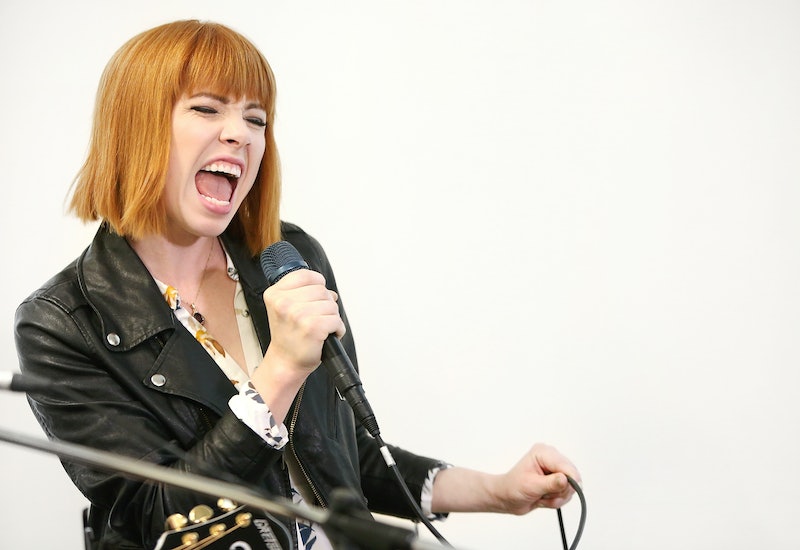 Call her maybe? Canadian cutie Carly Rae Jepsen used her ELLE Canada cover to show off her rocker chick side. She was almost unrecognizable on for the mag's August 2015 issue. The singer seriously culled inspo from longstanding rock queen Joan Jett, thanks to her shaggy and layered black hair, worn with razory bangs.

CRJ rimmed her crystal blue eyes with lots of black shadow and eyeliner, too. That's a move cribbed right from the Double J playbook and is one that most rocker chicks employ.

Add the shiny black leather jacket, which is another rocker chic staple, and Jepsen goes from sugary sweet and cute crooner to total badass with one helluva an edge.

Move over, Demi Lovato, who also has a predilection for leather, studs, and the color black!

Personally, I am so struck by the contrast of Jepsen's inky hair and her icy eyes. Yes, her cheekbones are way more contoured than I've ever seen. But it's the way the shades of both her eyes and hair play off one another that stand out.

This ELLE Canada cover is Carly Rae Jepsen at her coolest. I got used to her rocking reddish hair. When she takes a sharp left turn and goes with such an extreme shade, I am feeling it.

Doesn't she look super striking and nearly unrecognizable? Yes, but it so works for her.

There she is! The legendary Joan Jett, who reminded girls in the '80s that they, too, could love rock 'n' roll.

There is no denying Jett was the main source of inspo for Jepsen's ELLE cover.

CRJ has been migrating to the rock side for a while, though. Even with her orange locks, she still added edge to a print dress with a black leather jacket!

Lest we forget when Kendall Jenner took inspo from Joan Jett at Marc Jacobs.

Rock chick chic never, ever goes out of style! As long as you're okay with lots of black, lots of eyeliner, and leather, you're good!