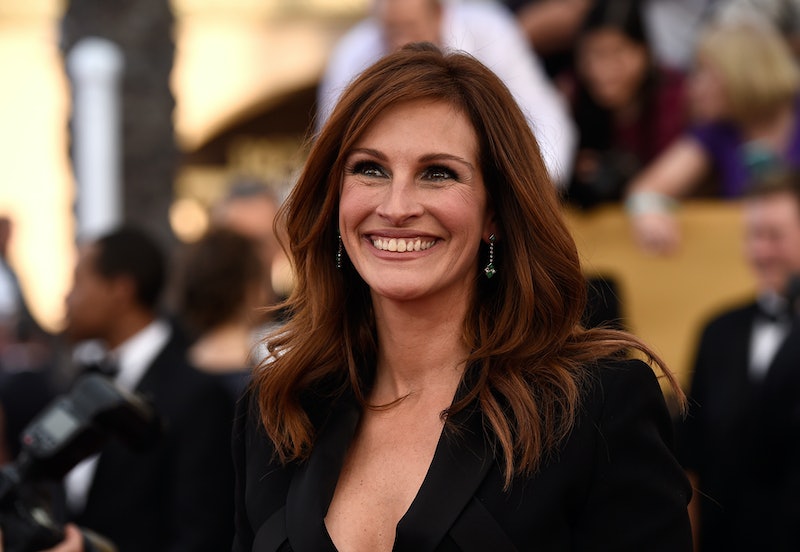 Lovers of ensemble cast films, rejoice! Garry Marshall (you know, the genius behind Pretty Woman, The Princess Diaries and so much more) is adding another movie to his holiday series. Julia Roberts is allegedly set to star in Mother's Day, while Jennifer Aniston, Kate Hudson and Jason Sudeikis are rumored to be in negotiations. Mother's Day follows Valentine's Day and New Year's Eve, Marshall's previous star-studded movies in the rom-com genre. Roberts appeared in the former, but she's also worked with Marshall on Pretty Woman and Runaway Bride. Hudson also previous teamed up with the director in 2004's Raising Helen.

Given the size of the casts in the previous two movies, it's reasonable to assume that many more actors will sign on to the project. The ensembles are known for featuring multiple Oscar winners and nominees, which makes this even more exciting. Hector Elizondo — a regular in Marshall's films — Ashton Kutcher and Jessica Biel all appeared in the first two movies, so there's a chance that they could go for the hat trick with Mother's Day.

Another signature for these films is their plot lines. The characters' lives intertwine, and are all connected in some way. (Yay, deeper meanings!) With that in mind, let's take a look at which plot lines Roberts, Aniston and Hudson could have in this upcoming movie.

Spoiler alert: Roberts already played a mother in Valentine's Day. Mother's Day could see her evolve this role or play a completely new one. Both Valentine's Day and New Year's Eve featured a teenage girl (Emma Roberts and Abigail Breslin, respectively) struggling with her coming of age. Could Roberts play the mom to the teen in the third movie?

It's a given that these rom-coms feature an unexpected and sweet romantic relationship. Aniston proved that she can hold her own in drama, but there's something always welcome about seeing her in a more comedic role. Surely, in a movie centered around mothers, there can be one with a budding romantic relationship.

Both Valentine's Day and New Year's Eve feature a character who is vehemently against the holiday. (I'm looking at you, Jessica Biel and Ashton Kutcher.) However, another character usually helps change this person's mind. Could the anti-Mother's Day character be Hudson? It would certainly be fun to see her play against her breezy, sunny type.

Regardless of what roles these three amazing actress might play in this movie, if indeed they will appear in it, we can at least be assured that it will be a fun and heart-warming ride that embodies the very spirit of the holiday. After all, that's what Marshall is best at.