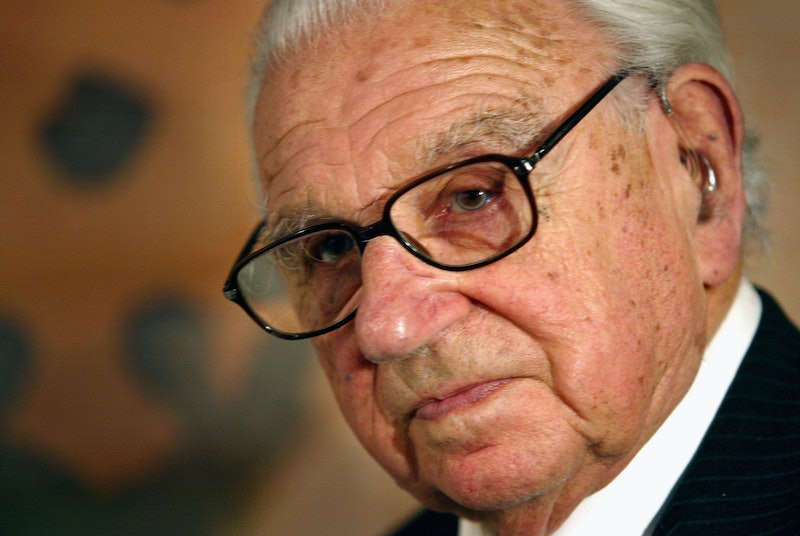 Dubbed the "British Schindler," the man who quietly saved more than 600 children from the Holocaust and said nothing publicly about it for decades, Nicholas Winton, has died at 106, his family said Wednesday. It took 50 years for his efforts to be brought to life — his wife discovered documents in their attic in 1988 that pointed to Winton saving hundreds — and he was awarded the Czech Republic's Order Of The White Lion last year.

His family said that his daughter and two grandchildren were at his side when he passed away. Winton's efforts were part of many quiet initiatives at the time to rescue Jewish families from the Holocaust, but what made Winton's actions so stunning was that he acted entirely alone, and didn't breathe a word to anyone about it for the next 50 years. He set up a private means of transportation to transport Jewish children to Britain, and it's estimated that he saved at least 650 children's lives. He was widely lauded for his efforts in the last years of his life, thanks to his wife's 1988 discovery.

On an episode of British TV show That's Life, more than a dozen of the children thought to have been saved by Winton appeared and honored him. Winton remained modest as his scrapbook was shown and the former children stood up around him, and even looked a little embarrassed.

The Maidenhead Advertiser reports that his death came exactly 76 years after he sent more than 200 children away from occupied Prague.

On Winton's 105th birthday, he was given the Czech Republic's highest award, and said publicly: "I want to thank you all for this enormous expression of thanks for something which happened to me nearly 100 years ago. And 100 years is a heck of a long time. I am delighted that so many of the children are still about and are here to thank me."

There is now a "Winton train" at the Prague Main railway station, and Winton was honored publicly a number of times before his death — both before and after his reveal (he was honored in 1983 for creating homes for the elderly).