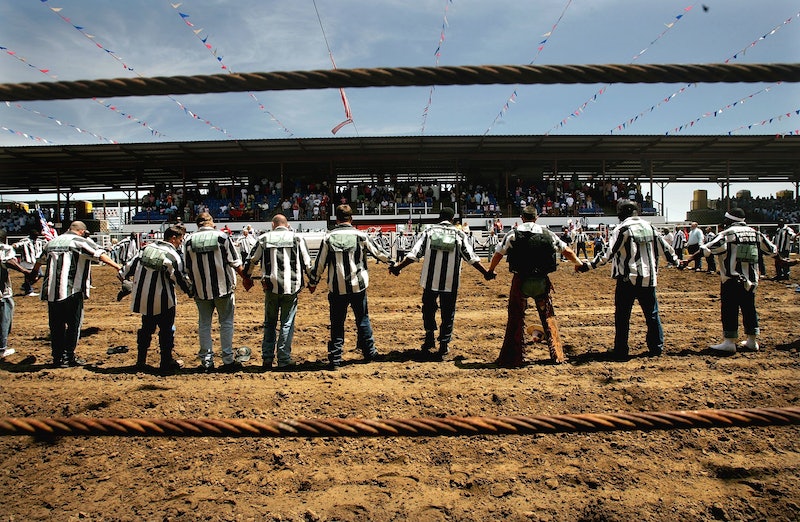 A Louisiana man who served nearly 30 years on death row for a crime he didn't commit died of Stage IV lung cancer Monday, less than a year after he regained his freedom. Glenn Ford, who was black, was wrongfully convicted back in 1984 by an all-white jury that found him guilty of murdering a jeweler and immediately sentenced him to death. It wasn't until decades later, when a state informant pointed out that another man had confessed to the killing in 2014, that Ford's conviction was actually thrown out. He finally walked free last March, having spent 29 years, three months, and five days in solitary confinement — nearly half his life. However, within 40 days of his release, Ford was diagnosed with the Stage III lung cancer that proved terminal.

Though he reclaimed his freedom last year, Ford wasn't exactly set-up for success when he re-entered the outside world. According to his lawyer, Ford allegedly never saw a dime of compensation from the state for his lost years of work or his failing health, and walked free with only enough money to cover his bus fare. His case — which Supreme Court Justice Stephen Breyer cited in his dissent against the death penalty this week — illustrates just how fraught the capital sentencing process is with error, prejudice, and all sorts of arbitrary pressures that lead state officials to make crucial mistakes when deciding who should be executed.

"At the time of his release, he was the longest-serving death row inmate in the United States," William Most, Ford's attorney, said in a statement. "The state has so far denied Glenn’s petition under Louisiana’s wrongful conviction compensation statute; all Glenn received for his nearly thirty years on death row was $20 for a bus ride home from prison."

Ford's traumatic dealings with the Louisiana justice system first began back in 1983, when he was arrested for shooting and killing Isadore Rozeman, a watchmaker in a jewelry store. Ford denied that he was even on the scene at the time, but after a witness placed him at the scene of the failed robbery and with the gun, prosecutors fixed their sights on the then-33 year old. The next year, an all-white jury in Caddo Parish, Louisiana, found him guilty of first-degree murder, and prosecutor A.M. Stroud III sought the death penalty, allegedly telling the jury that Ford’s attempts to stay alive and prove his innocence indicated he did not respect their decision on his guilt.

For decades, Ford fiercely maintained his innocence, but multiple appeals fell by the wayside until new evidence finally surfaced. A state informant said he heard the confession of another man at the scene of the robbery who had pulled the trigger. The witness that the state relied on during the trial then recanted her testimony, and it quickly became clear that Ford had never been a part of the crime at all, though it was alleged he may have tried to pawn some of the jewelry taken in the heist afterwards.

According to Stroud, if the evidence had surfaced in 1984 when he was first prosecuting the case, the state wouldn’t have even had enough to go on to arrest Ford in the first place.

On March 10, 2014, Ford was finally exonerated and released from Louisiana’s notorious Angola prison, where he had spent almost half of his life in solitary confinement. After prison officials equipped Ford with $20 for bus fare and two cardboard boxes containing all his possessions, he set out to rejoin the world that he was never supposed to be taken from in the first place. His prison bank account held a balance of just $0.24.

And then came the big blow: Within 40 days of walking free, Ford was diagnosed with Stage III lung cancer, which quickly spread throughout his body over the next few months. Since his release, Ford has been cared for by Resurrection After Exoneration, a nonprofit dedicated to supporting exonerees, which has paid for his medical bills through donations. John Thompson, executive director of Resurrection after Exoneration, described Ford’s reaction to the medical diagnosis as a "hurting thing."

"This man spent all this time [in prison] because of a crime he didn't do, only to get the shock of his life that he's dying only 30 or 40 days after he was home," Thompson told The Times-Picayune. "It's like, 'Oh, you thought you was off death row, but you're not. You're still here.'…How would you feel?"

Under Louisiana law, the wrongfully convicted and imprisoned can apply for up to $250,000 in compensation from the state. But sadly, Ford never received any state support after his nearly 30-year stint in solitary confinement. Instead, the state tried to block his compensation request under a technicality in the law that allows Louisiana to deny money to any prisoner who was implicated in any crime based on the available facts of his case. Because Ford tried to pawn some of the stolen jewelry, the state argued, he should not be entitled to any state funds — regardless of the fact that he has lost years of his life and at the time of his death, had literally nothing.

In turn, Ford and his attorneys filed three separate lawsuits at the state and federal levels, seeking compensation both for his wrongful imprisonment and for the poor quality of the healthcare he received while in Angola prison. In court filings, Ford’s attorneys claim that better medical care could have found his lung cancer earlier when treatments could have contained it, and perhaps forced it, into remission.

Although Ford will not be alive to see if any of his suits bring financial windfalls for the abuse he has suffered, his children and grandchildren might yet benefit.

In his fight for state compensation, Ford was joined by an unlikely ally — his former prosecutor. Stroud, who left the district attorney’s office in 1989 to move into private practice, penned a very candid public apology to Ford for his role in the botched 1984 conviction that led to his death sentence.

"In 1984, I was 33 years old," he wrote. "I was arrogant, judgmental, narcissistic and very full of myself. I was not as interested in justice as I was in winning."

The letter, which later ran in the local Shreveport Times, soon went viral on the Internet. In it, Stroud not only apologized for his own inexcusable behavior, but also outlined the many ways in which Ford’s case reveals the deeply flawed nature of capital punishment itself.

"This case is another example of the arbitrariness of the death penalty," he wrote. "I now realize, all too painfully, that as a young 33-year-old prosecutor, I was not capable of making a decision that could have led to the killing of another human being. No one should be given the ability to impose a sentence of death in any criminal proceeding."

Stroud continued on to identify a myriad of problems that he feels compromised the process and eventually led prosecutors to convict the wrong man. For starters, Ford's attorneys had allegedly never tried a criminal case before, let alone a capital one. Well-intentioned though they might be, Stroud suggests they didn't have the experience or the know-how to fight for their client as well as trained capital defense lawyers could have. The prosecutor also said that while he recognized the severe imbalance in legal firepower at the time, he was relatively unconcerned.

And then came another questionable move: Stroud says that he and the other prosecutors excluded black jurors from the jury panel, believing that they would be less likely to seek or confirm a death sentence. "I knew I was excluding individuals we felt would not seriously consider the death penalty," Stroud later said in an interview with ABC's Nightline in 2014. "Looking back on it, I was not as sensitive to the issue of race as I am now."

Stroud claims he also relied in part on evidence that indicated the shooter must have used his left hand to wield the gun. This was significant, since Ford was left-handed, but he now says that the science behind that testimony later turned out to be "pure junk science at its evil worst."

At the time, Stroud wrote that he believed wholeheartedly that he was pursuing the right guy, which is why he didn't overturn stones that he now feels should have been turned over. And it's a realization that now haunts him. "My mindset was wrong and blinded me to my purpose of seeking justice, rather than obtaining a conviction of a person who I believed to be guilty," he wrote. "I did not hide evidence, I simply did not seriously consider that sufficient information may have been out there that could have led to a different conclusion. And that omission is on me."

Had he pursued the rumors that other men had been responsible for Rozeman's death from the outset, Stroud himself notes that Ford might never have been tried in the first place. Quite a sad reality to consider, knowing what we now know, but as Stroud underscored in his eulogy, he believes errors like his are still rampant in the criminal justice system. Those who staff the system itself are fallible, claims Stroud, ruled by their own unconscious (and in some cases, conscious) prejudices. This, he suggests, is what in turn stacks the odds against future defendants.

Now decades later, Stroud stands in fervent opposition to the death penalty — the very punishment he so strongly fought for back in 1983. "All [the death penalty] is is state-assisted revenge," Stroud told The Washington Post in March. "We can't do it. It’s arbitrary, it’s capricious. And I believe that it’s barbaric."

Sadly, Ford's story is not the exception when it comes to the unwieldy and controversial operations of U.S. capital sentencing system. Since 1973, 151 people have been exonerated from death row, with six exonerations coming in 2014, according to Amnesty International. A new study claims that four percent of current death row inmates were wrongfully convicted and are most likely innocent. Stories of death-obsessed prosecutors, biased juries, shoddy evidence preservation and unreliable witnesses abound. (For some more examples, check out recent stories in The Atlantic and The New Yorker.)

In fact, just hours after Ford’s death, Breyer released a substantive dissent calling for an end to the use of capital punishment in which he cited Ford’s case as yet another example of how human error corrodes the promise of justice for some individuals caught in the cogs of the criminal justice system.

"A death penalty system that is unreliable or procedurally unfair would violate the Eighth Amendment [and its provision against cruel and unusual punishment]," Breyer wrote in his dissent, with Justice Ruth Bader Ginsberg joining him. "I believe it highly likely that the death penalty violates the Eighth Amendment. At the very least, the Court should call for full briefing on the basic question."

Whether the conservative faction of the Supreme Court will follow up Breyer and Stroud's concerns over what they (and many throughout the U.S.) feel to be unjust deployments of capital punishment seems unlikely. In the mean time, Ford's children will keep fighting to see that the state pays for its mistakes in his case, even if it is some 30 years too late.

In Ford’s case, though, justice delayed has been justice denied — and the reality of what that has led to is truly heartbreaking.