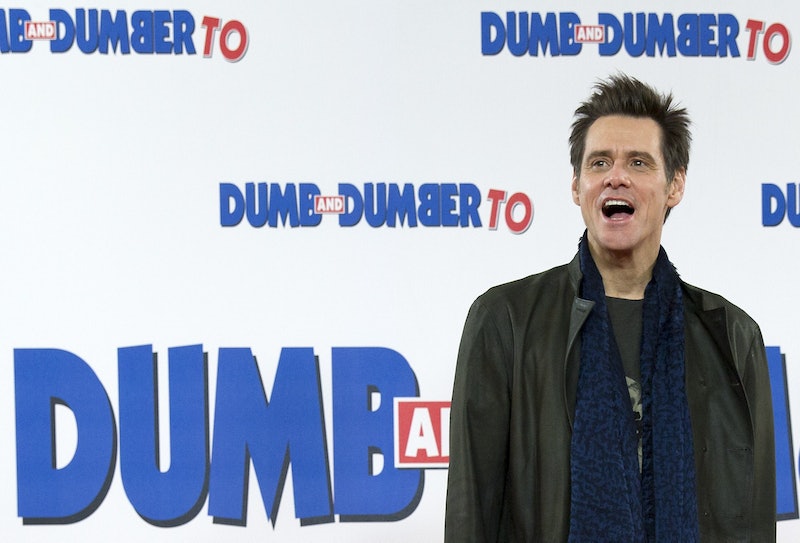 Are you a fan of sensible, scientifically sound public health initiatives? Are you also a fan of sophomoric '90s comedies? If so, this might sting a little: Jim Carrey went anti-vaccination on Twitter Tuesday night, blowing up over a bill signed into law by California Governor Jerry Brown, making vaccination mandatory for children in the state. And, just as you might predict, the denizens of social media didn't take it very well — people have been tweeting derisively about Carrey since it happened, lambasting the name-brand funnyman.

If you're not familiar with the California vaccine law, it's worth a refresher. The bill was drafted in the wake of a measles outbreak that expanded at Disneyland, measles being a disease that had been virtually eradicated in the U.S. through high rates of vaccination. But throughout swaths of California, from Los Angeles to the San Francisco Bay Area, some parents had secured exemptions to prevent the children from being vaccinated, largely thanks to decades-old, scientifically debunked claims that they can cause autism.

These anti-vaccination claims have been advanced by a number of celebrities in recent years, most prominently former Playboy model and actress Jenny McCarthy, who was in a relationship with Carrey from 2005 to 2010.

It's no secret that Carrey became involved with the anti-vax movement during that time — he and McCarthy even went on Larry King's CNN show to discuss it — so you probably could've guessed he was unhappy with Tuesday's news. But nevertheless, he came out swinging on Twitter, labeling Governor Brown a "corporate fascist."

After his tweets drew widespread attention, Carrey clarified that he isn't anti-vaccine, but merely anti-thimerosal — which sounds fine, until you consider nearly all vaccines haven't contained thimerosal for years, and that there's no evidence it's a hazard in the first place. Here's what the CDC says about it:

Since 2001, with the exception of some influenza (flu) vaccines, thimerosal is not used as a preservative in routinely recommended childhood vaccines.

Thimerosal is a mercury-containing preservative used in some vaccines and other products since the 1930's. There is no convincing evidence of harm caused by the low doses of thimerosal in vaccines, except for minor reactions like redness and swelling at the injection site. However, in July 1999, the Public Health Service agencies, the American Academy of Pediatrics, and vaccine manufacturers agreed that thimerosal should be reduced or eliminated in vaccines as a precautionary measure.

None of that is going to sway Carrey at all, however.

Since the tweets from Tuesday night, Carrey's received a pretty good roasting on Twitter, from a variety of sources.

Many people decided to have a little fun with Carrey's, shall we say, up-and-down filmography, as well.

Perhaps the saddest thing about this story, and in all stories about the anti-vax movement, is that the scare stories and debunked claims all stem from a humane impulse. People convince themselves that vaccines might cause autism, in spite of a wealth of evidence to the contrary, so they don't vaccinate their kids. But in doing so, they trade in the fallacious risks for the genuine ones — easily preventable, potentially serious childhood diseases like measles and whooping cough.

Hopefully California's new law will at least raise the state's vaccination rates back up to more acceptable levels. After all, as The Hollywood Reporter detailed last year, some schools in Los Angeles were operating with worse vaccination rates than those in South Sudan.

More like this
How To Support Gun Control Reform Right Now
By Morgan Brinlee and Carolyn Steber
Plan C Vs. Plan B: What's The Difference?
By Lexi Inks
The Church Of Scotland Votes To Allow Same-Sex Marriages
By Sam Ramsden
7 Gun Control Advocates To Follow On Twitter
By Madhuri Sathish-Van Atta
Get Even More From Bustle — Sign Up For The Newsletter