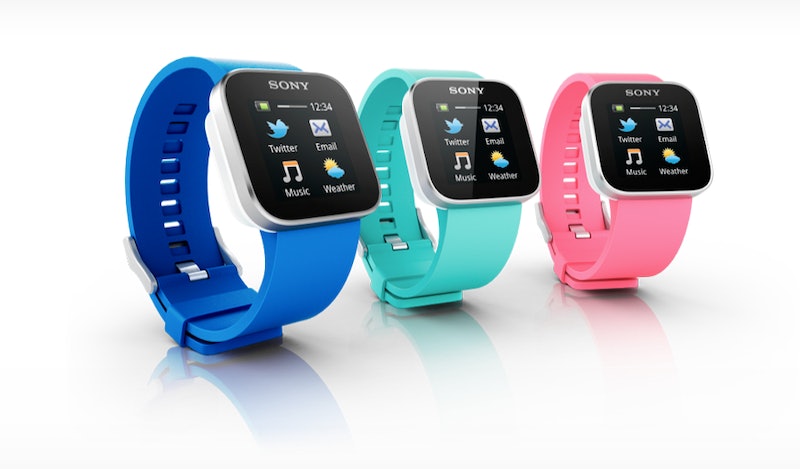 Seen anybody with a "smartwatch" lately? We haven't either—but that hasn't stopped electronics giant Sony from trying to sneak them into our hearts, and onto our wrists. The company unveiled its shiny new second-generation smartwatch on Tuesday, which critics are calling a vast improvement on their last model. (Though not that much of an improvement, because that would involve getting a significant chunk of the population to, um, wear one.)

Awkwardly for Sony, the affections of the smartwatch market—because that's a thing, apparently—already lie elsewhere. Pebble, the recent startup and creator of dazzlingly functional smartwatches, utterly bypassed and embarrassed Sony by becoming the biggest Kickstarter project to date last year. This might be because Sony's smartwatch, by all accounts, sucked. Here's how Gizmodo reviewed it:

"No one should own this, no matter their lifestyle preferences or moral views. I promise you—you won't like it. The Sony SmartWatch is pathetic, frustrating, and empty. There's no way to justify spending $150 on this—this ripoff of a thing."

Sony also faces big-time competition from MetaWatch, which bypassed the "smartwatch" label altogether (because it sounds mental) and focused instead on the creation of "functional jewelry" that they promise will "reinvent the watch." Both MetaWatch and Pebble arrived early this year, and it's rumored that Apple and Microsoft are getting in the game as well. And let's face it: before Apple, we all thought a tablet was something that people drew on in the Stone Age. As soon as they get in on this, smartwatches will probably take up residence on the wrist of popular culture—but will Sony's latest offering be able to compete?

Well, maybe. The main advantage of Sony's Smartwatch 2 is that it can legally feature all manner of third-party apps: Twitter, Facebook, you name it. It's got a calendar, the ability to snap photos (from, we assume, a slightly off angle), and all sorts of call-logging and remote-music services. The problem with each and every one of these smartwatches is their platform restrictions: without Apple on board, it's very difficult for any smartwatch to integrate fully with iOs, and at any rate, the Smartwatch 2 is only compatible with Android. If you've got an iPhone, this just won't do.

To conclude: the all-seeing Apple will eventually slap some gorgeous, shiny thing on your wrist, and all of these "smart" devices are going to look like those Flintstones props.