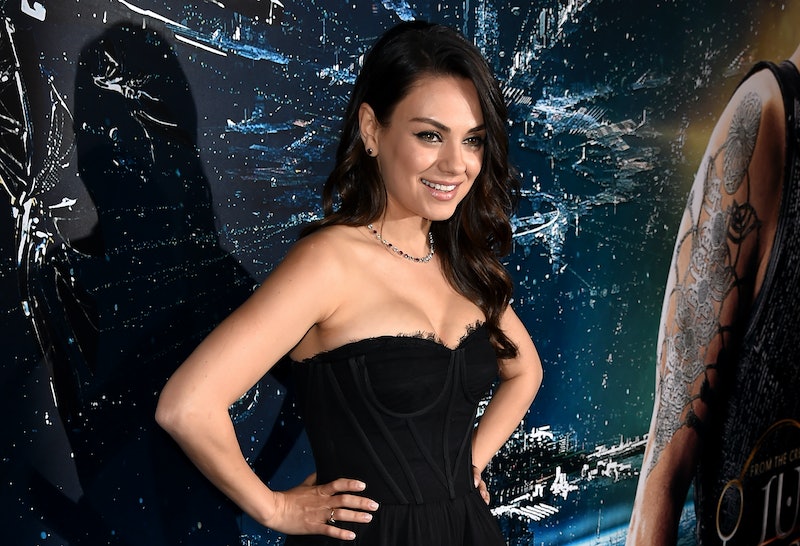 Mila Kunis fans may be disappointed to learn that the actress doesn't reprise her role of Lori in Ted 2. After all, Kunis has a long-standing relationship with creator Seth MacFarlane (having voiced the character of Meg on Family Guy since 1999) and many applauded her performance in Ted. So when the sequel started being publicized, this time with Amanda Seyfried as the featured female, people were confused by the the original star's absence. How does Mila Kunis feel about Ted 2 , considering another actress took over her spot as John (Mark Wahlberg)'s romantic interest?

Seeing as the main reason for her not returning was that there was great news in her personal life, I doubt there were any hard feelings. The actress was was pregnant with daughter Wyatt, her child with Ashton Kutcher, at the time the film was shooting. And even if that hadn't been the case, Deadline reports that MacFarlane's intent was for Ted 2 to focus on Ted and his new wife, so Kunis' Lori wouldn't have had a sizable role, anyhow. Kunis nonetheless showed encouragement for the production, saying, "I wish them all the best, and I'm sure the movie will be hysterical."

Celeb departures from sequels are actually very common, but not everyone handles them as gracefully as Kunis. Here are some memorable times that actors were replaced in films, as well as their reactions.

After appearing as the vampire Victoria in the first two movies of the Twilight trilogy, Rachelle LeFevre was replaced for Twilight: Eclipse by Bryce Dallas Howard. The studio said the decision was due to scheduling conflicts, but LeFevre disputed this, telling Access Hollywood, “[I] accepted only roles that would involve very short shooting schedules...I was happy with my contract with Summit and was fully prepared to continue to honor it. Summit chose simply to recast the part.” And so began a "he said/she said," as both parties continued to issue conflicting public statements about what happened. Ouch.

2. Katie Holmes and The Dark Knight

Katie Holmes' Rachel Dawes was considered by many to be a weak point of Batman Begins, so there were those who naturally assumed this was the reason for Holmes' replacement by Maggie Gyllenhaal for The Dark Knight. The public reason for the change, however, was Holmes' acceptance of a role in a different film. She told MTV, "I had a great experience working with Chris Nolan [and] I'm sure it's going to be a great movie. [But] I chose to do this movie [Mad Money], and I'm really proud of it." Kudos to Katie for being supportive of her former collaborators while pursuing her own endeavors.

3. Ed Norton and The Avengers

After replacing Eric Bana as the Hulk for The Incredible Hulk, Edward Norton was then himself replaced (by Mark Ruffalo) for The Avengers. Marvel said they were seeking a new actor who shared the "collaborative spirit" of the other Avengers cast members, while Norton offered his own explanation for how and why the split occurred. He told EW: "My feeling was that I experimented and experienced what I wanted to....Maybe on some unconscious level, I didn’t want to have an association with one thing in any way degrade my effectiveness as an actor, in characters. I think you can sort of do anything once, but if you do it too many times, it can become a suit that’s hard to take off, in other peoples’ eyes." Fair enough, Mr. Norton. Fair enough.

Despite the fact that Jodie Foster's performance in Silence of the Lambs earned her an Academy Award, Foster turned down the opportunity to reprise her role as Clarice Starling in the sequel Hannibal. Ever the diplomat, she offered the following explanation for her decision to Total Film: "The official reason I didn’t do Hannibal is I was doing another movie, Flora Plum. So I get to say, in a nice, dignified way, that I wasn’t available when that movie was being shot." When asked if she watched the movie, though, Foster replied, "I saw Hannibal. I won’t comment." And so the star manages to say a lot by not saying anything.

You must have been living under a rock if you missed the blowout between Megan Fox and Transformers director Michael Bay following Fox's departure from the franchise. Each claimed that the other was impossible to work with, and then they resorted to personal blows. Fox's reps later officially stated that it was the actress' own choice to sever her relationship with the production, but that she "wishe[d] the franchise the best."

Fox and Bay ended up collaborating again on 2014's Teenage Mutant Ninja Turtles, at which point Fox told EW, "[Bay] was one of the most lovely people that I dealt with in making this movie." Uh, change of heart, much?

The bottom line: There always appears to be missing pieces to the story when an actor is replaced in (or just flat-out disappears from) a role. But life goes on, and for Mila Kunis at least, life is going on in a big way: she's currently racking up quality time with baby daughter Wyatt. Life goes on for Ted 2 also, as it continues to rack up major revenue at the box office.