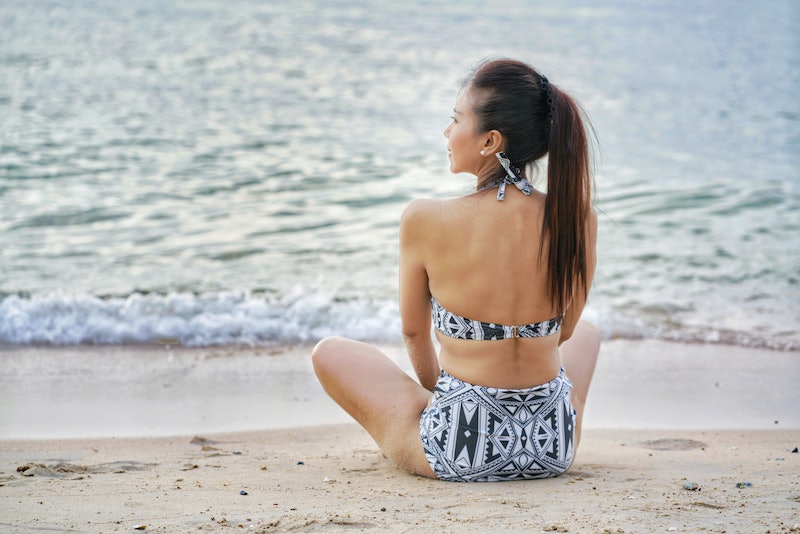 Over the years, I've had plenty of beauty blunders. Most were make-up related and fairly harmless, but all the shaving mistakes I've made have lead to a lifetime of scarring from years of razor burn. And yet I still shave. What can I say? I'm committed to the shaving process and all its possibilities. I'm also too lazy and slightly squeamish about getting those more private areas of my body waxed. Since I don't want you making the same mistakes I've ruined my legs with, I want to share the lessons I've learned from improper razor use.

When I first started shaving, I shaved as fast as I possibly could because my older sister apparently needed to get into the bathroom every 15 minutes to stare at herself. At that point in my teens, I really just wanted to do the bare minimum to keep my parents from questioning my hygiene. I wasn't interested in any shaving tips my mother or sister had to offer nor did I care about the future of my skin. I would yell "I'M DONE!" while exiting the shower, still soaking wet, with blood dripping down my armpits and legs from dozens of shaving nicks.

Unfortunately, those aggressive shaving tactics would stay with me well into adulthood, bringing with them the constant need for scar creams, aftershaves, and a myriad of expensive razors that promised a close, gentle shave. The advice given to me was to just stop shaving altogether, but that life isn't for Kristin — and it might not be for you either. If that's the case, here are some mistakes we should all give up for good.

It was mostly my armpits that fell victim to this rookie mistake. It always happens when I find myself getting dressed, after I've already showered, and I suddenly realize my outfit I was planning on wearing is either covered in husky fur or completely missing. Suddenly, that short-sleeved top turns into a halter dress and I'm rushing into the bathroom to shave my dry armpits. According to Women's Health, your skin should be hydrated before shaving because it makes the hairs easier for your razor to grab.

Exfoliating right after you shave can lead to irritation since your skin can be dry or raw after shaving. Instead use an exfoliate before you shave to protect yourself from razor burn. You'll be removing dead skin cells and the surface layer of bacteria and dirt that are otherwise likely to get clogged into your pores while you shave, giving your skin a painful array of razor bumps and ingrown hairs. This is particularly true for those with coarse, thick hair that are already prone to ingrowns. I've definitely learned my lesson on my bikini line and armpits the hard way: Exfoliate, shave, tone, and moisturize —your skin will thank you tomorrow.

Using a dull razor was pretty much second nature to me because in my late teens and early 20s, I was basically a grosser, cheaper version of myself. I would have the same pair of contacts and the same razor for an entire semester — and both my eyes and skin paid a cruel price. According to the Huffington Post, in order to remove unwanted hair with a dull razors, we often have to apply more pressure which leads to razor burn. Replace your razor often, not just for a close shave, but to toss out the bacteria and grime that inevitably builds up on your razor — you do not want that on your skin.

This was probably the mistake I made the most often and was the hardest thing for me to stop doing. The above shaving mistakes would lead to such crisis on my bikini line, that often I just shaved over my bumps and hoped for the best — which never came. I recommend treating your ingrown hairs before the next time you shave: Use an oil-control, acne-fighting cleanser or an astringent like lemon juice to lighten and treat your problem areas. I've found a lot of success brightening my scars with lemon juice and found that using a lavender tea-tree cleanser in between shaves helps bring down the inflammation. You'll be shaving again in no time!

5. Not Moisturizing Before Or After A Shave

Shaving doesn't have to be a drying experience on your skin. Before shaving, let the steam from a hot shower work its way into your skin to create a nourished environment. Then use a shaving cream with aloe, coconut oil, or vitamin E to soften your shave. You can purchase razors with gel tabs already built-in or you can add these ingredients to your natural shaving cream. After shaving, I usually long for a heavy-astringent based after-shave, but I've found that coconut oil and lemon tea-tree oil together work as a great after-shave. As long as you dilute tea tree oil with a carrier oil that suits your skin, you shouldn't feel any burning and you'll be starting the healing process necessary to keep razor burn away.

More like this
17 Dermatologist-Recommended Skin Care Products Under $20
By Audrey Noble
The Best Ways To Get Rid Of & Prevent Red Bumps From Shaving, According To Dermatologists
By Madison Barber
Bath & Body Works' Summer Scents Are Extra Dreamy
By Paris Giles
12 Triple Lobe Piercing Ideas For A Truly Unique Stack
By Paris Giles
Get Even More From Bustle — Sign Up For The Newsletter