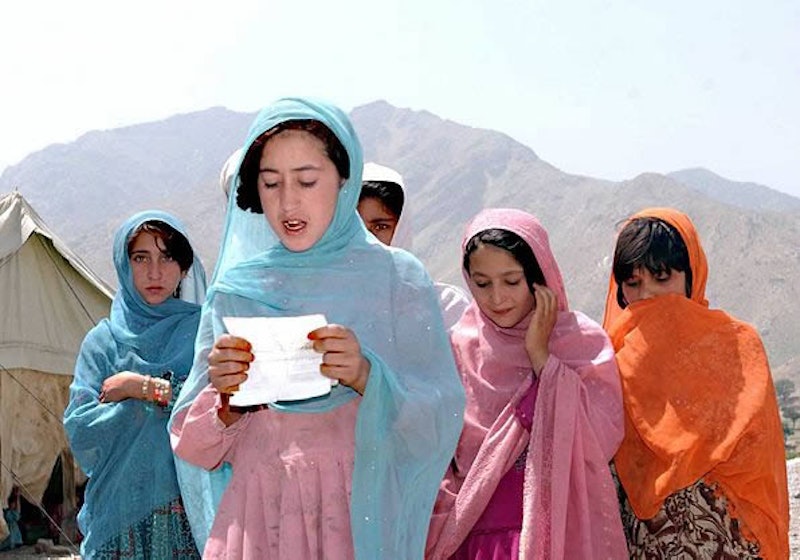 We all know that being a writer is hard. Being a woman writer, with all that industry bias and those glass ceilings out there, is even harder. But nothing can quite describe the daring, sometimes terrifying, experience of being a woman writer in Afghanistan — except maybe the words that Afghan women writers produce themselves.

If you’re interested in what it’s like not only to be a woman in Afghanistan, but to be a woman writer there, you’ll want to check out the Afghan Women’s Writing Project (AWWP.) Since 2009, AWWP, a nonprofit organization (for which I volunteer: full disclosure!), has allowed readers a glimpse into the hearts and minds of women who come from many of Afghanistan's 34 diverse provinces by hosting writing workshops both in the country and online. They then make their writing available worldwide via AWWP’s online magazine to spread their words.

Their most recent feat of publishing strength is the anthology, Washing the Dust from Our Hearts , just released from Grayson Books. Washing the Dust from Our Hearts features the work of 29 women poets and essayists, whose writings come directly from the AWWP workshops themselves. This collection is the first bilingual (English and Dari) print anthology to be published by the organization; their other in-print collection, The Sky Is A Nest Of Swallows, was published in 2012, and is available in English.

Pari, a Dari translator and AWWP writer (AWWP doesn't use full last names or publish faces, and sometimes publishes anonymously, for safety reasons) was ecstatic at the opportunity to publish in both English and Dari, telling Bustle:

It was amazing because I had a collection of my poems in the book, and I was the translator of my own poems. I was in tears writing in Dari, imagining presenting our work to our Afghan audience. Imagine our society … reading our work, think[ing] about our work. This book gives me hope; to be proud of my work. I wish I could explain [in] words [from] how [many] difficult circumstances every writer in our project writes.

The title of the anthology was taken directly from a line in one of Pari’s poems, Good Morning, Madar Jaan, which translates to “Good Morning, Mother,” excerpted here:

Azadi [freedom] is the name of my unborn daughter, the perfume of love in my poem's dress. Azadi is my son's smile when he says, Sob ba khair, Madar jaan! [Good morning, mother!] It is the prayers of winds, which forgive our sins, the voice of rain, whispering in our ears, washing dust from our hearts.

Workshop director Stacy Parker Le Melle spoke to those difficult circumstances from which each writer who participates in an AWWP workshop comes, mentioning one essay included in the anthology, written by a woman named Fatima:

Fatima's essay title says it all: ‘The Bravest Girls in the World.’ Most girls and women we work with enjoy some family support, but all face suppression within society at large, and must battle the widespread belief that a good girl is a submissive girl, one who doesn't rock the boat. These writers must first battle their own fears to resist cultural norms. The proof of victory is in their words, in the fact that they are making changes in their lives, in their families, one step at a time.

AWWP operates under the belief that “to tell one’s story is a human right.” Organization founder and journalist, Masha Hamilton, established the nonprofit in honor of an Afghan woman named Zarmeena, who was executed by the Taliban in Ghazi Stadium in Kabul in November of 1999. After viewing a video of the execution, which had been smuggled out of Afghanistan, Hamilton began to think closely about the stories in Afghanistan that weren’t being covered by the media. She decided the best way to find out was to create a space in which Afghan women could tell their stories themselves.

With the help of writing mentors from all over the world, like Elizabeth Titus, Hamilton’s vision became a reality.

"This work matters,” says Titus, about her experiences as a writing mentor. “As both a mentor for the writers in Afghanistan and a host in America for an Afghan woman named Sabira, who wrote for AWWP and now attends college here, I have seen firsthand how important it is for the writers to have their work published and read all over the world. They are filled with pride that lasts for years, knowing they have made a difference for Afghan women. And for the mentors, it is a unique opportunity to be part of social change and to connect on many levels with the brave writers."