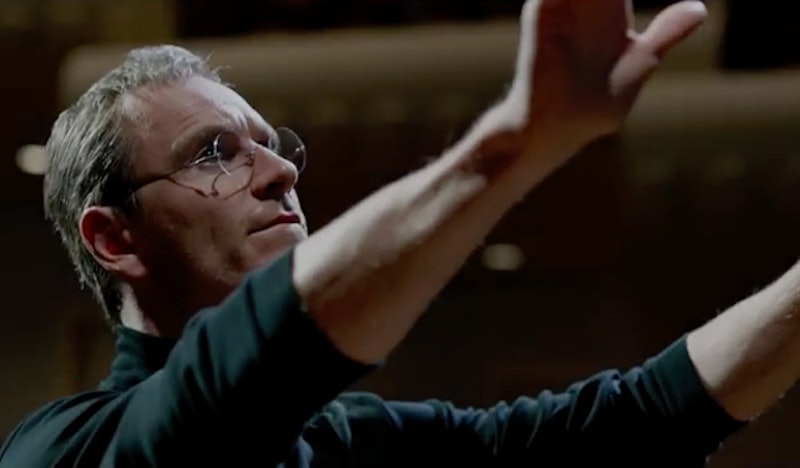 When it comes to modern technology, there is perhaps no name more recognizable than that of Steve Jobs, Apple co-founder and computer revolutionary. And while Jobs was taken from us far too early back in 2011, his legacy continues not only to live on, but to grow and change into something even greater than it already was. Naturally, Jobs has become a fascinating figure, one that people want to know more about both professionally and personally. While the entrepreneur has already been the subject of his own full-length feature film in 2013's Ashton Kutcher-led independent movie Jobs, things are about to get kicked up another notch in the eponymous Steve Jobs , due out later this year.

Steve Jobs was written by Aaron Sorkin and directed by Danny Boyle, and that alone is enough to grab your attention. But then you have to consider the amazing cast: Michael Fassbender as Jobs, Seth Rogen as Steve Wozniak, and Kate Winslet as Joanna Hoffman, just to name a few. And while the big names involved in the movie aren't really a reason to see it, once you catch the trailer, I think you'll be ready to book a ticket, because it looks really, really good.

Don't believe me? Here are some of the best moments.

The First Time We Lay Eyes On Jobs

Don't you just sort of feel a shiver in your spine the first time he comes on screen? I mean, I know the movie's about him and all, so obviously he's in it, but seeing an actor transform into such a major figure like that is always an intense moment.

Seeing How Admired Jobs Really Was

Jobs was respected and loved both by his peers and everyday technology enthusiasts, which is incredible and rare for company founders/CEOs. It shows just how amazing and widespread Jobs' contributions to the field really were, and you can't help but be inspired by it.

Rogen initially felt like a really wacky casting choice for the role of Steve Wozniak, but anyone who's ever seen Woz (as Kathy Griffin used to call him) in action knows that he is a bit wacky and eccentric, but also incredibly intelligent. Seeing Rogen in the role for the first time, something just clicks. I'm into it.

Wait A Minute... Is That Kate Winslet?

Joanna Hoffman was one of the original members of the Apple team back in the '70s, and she's also absolutely brilliant. Who better to portray her than one of our best living actresses? I almost didn't recognize Winslet at first, but now that I've seen her, I find myself feeling incredibly comforted. A movie she's in is guaranteed to be a good one.

I have to admit, I "get" computers in terms of how to use them, but I'm continually amazed at how any human brains came up with the idea and then got them to work. Advancing technology is so miraculous to me, and I'm fascinated by it, so seeing that progression in Steve Jobs is going to be so good.

The First Hint Of Trouble Behind The Scenes

Just because Steves was brilliant at his job doesn't mean his personal life didn't pay the price and have its own complications. It's unclear just how far into his relationships with his family we'll go in the movie, but it certainly looks interesting.

Okay, So All Of It Looks Amazing

What I love about Steve Jobs is that it seems to serve as a retrospective of several eras of his career and doesn't skip out on the lows to only highlight, well, the highs. After all, to truly appreciate something, we need to know the good and bad of it, and it seems like this movie will do just that.

Watch the full trailer for Steve Jobs, out October 9, below:

More like this
You Can Thank 'Spider-Man' For The Meme-ification Of Movies
By Dana Schwartz
What Is “Night Luxe?” Breaking Down TikTok’s New Aesthetic
By Courtney Young
TikTok Is Using A ‘Love Island’ Sound To Expose Their Weird Crushes
By Courtney Young
The Viral TikTok “30,000” Sound Fits Nearly Every Scenario
By Courtney Young
Get Even More From Bustle — Sign Up For The Newsletter