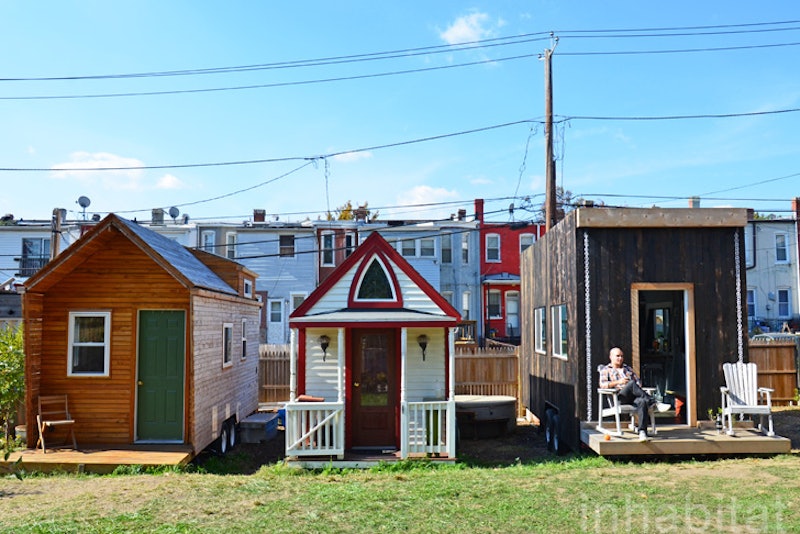 What do you get when you blend together the desires for clean design, sustainable building, minimalism, and cost-effective housing? The adorably named Tiny House Movement, of course. The Tiny House Movement is a social initiative by activists attempting to live efficiently and happily in tiny homes that are both environmentally and price conscious. One such activist is design student Joel Weber, whose tiny home clocks in at 145 square feet. Like, I'm not even sure I could fit all of my beauty products into 145 square feet.

According to the Huffington Post, Weber decided to build his tiny home when he was a sophomore in college, ultimately determining that living in tight quarters was totally worth it if it meant he could live mortgage-free. In addition to being debt free, Weber has to pay only very minimal utility bills, due to the energy efficient lighting he used. The entire tiny home is built using repurposed and reclaimed materials, making the decision to live there both highly environmentally conscious and financially conscious.

Tiny homes are typically defined as homes that are less than 500-square feet, so even within the realm of tiny homes, Weber's home is, well, particularly tiny. Everything in his home serves multiple purposes: His desk is nestled into his shelves, the tops of which serve as the staircase to his loft bed. The design student insists that the Tiny Home movement is not just a trend, but rather a philosophy that's here to stay.

So, what should you know about the Tiny Home Movement?

That means that the 100 to 500 square-foot tiny homes are at least 80 percent smaller than an average home.

2. 68 percent of tiny house owners have no mortgages.

Which is crazy high compared to the measly 29.3 percent of traditional home owners.

And that's not counting manual labor, which you either need the time to do yourself or the money to pay someone else to do it. It's still cheaper than buying a normal house, but it's not quite as cheap as most people think it's going to be.

4. Tiny houses are being used as homeless shelters.

Nonprofits in Oregon and Washington have begun utilizing tiny homes as efficient and effective homeless shelters.

5. The first tiny house-friendly town is in Spur, Texas.

So not everything is bigger in Texas. In 2014, Spur declared itself to the the first tiny house-friendly town, although the tiny houses in Spur must have foundations (meaning they can't be attached to cars, as many tiny homes are).

6. A&E is casting for a show called Tiny House Nation.

Because of course that was going to happen.

Check on the video of Weber talking about his tiny home here.