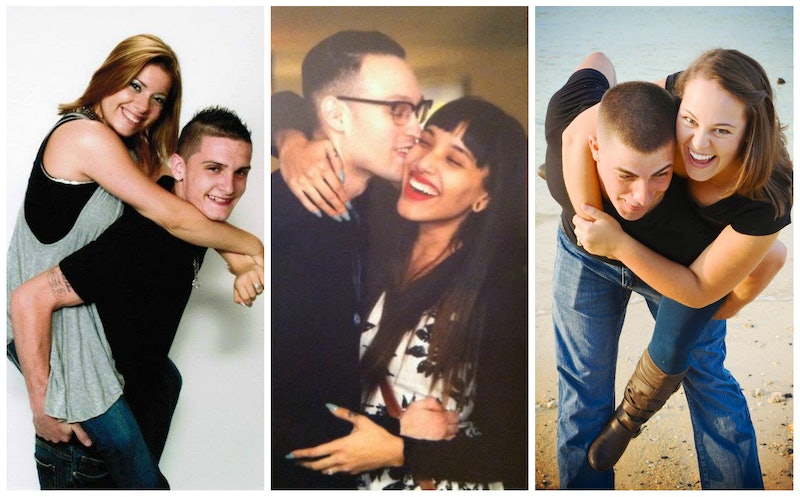 “Generation Me,” more commonly known as the Millennials or Gen Y, kind of gets a bad rap. Those of us born in the mid-late ’80s and ’90s classify as the most self-obsessed generation to date — the generation that depends on its parents for everything, the generation that is super screwed because of student loans, broken healthcare, endless wars, and George W. Bush (just to name a few). We are constantly bombarded with all the things that are wrong with us, with all the reasons our futures are going to suck, with all the reasons we are spoiled and useless.

On top of it all, we 20-somethings are also told we are hypersexual and destined to live the hookup life out of an inherent lack of interest in love or marriage. Of course, that’s been proven false, and according to a study by Pew, 70 percent of unmarried Millennials do want to get married someday. Someday. Average Millennial marriage ages are now 30 for women and 32 for men as compared to 20 and 23 in the ’60s. Speaking as a 20-something, I’d say there’s less pressure than ever for us to wed early. We have the option now of going to college, finding a job, and growing financially independent before settling down. It means we don’t have to jump into anything we’re not ready for. We don’t have to get married just because our parents expect it of us.

But some couples aren’t following suit. There are still those couples exchanging vows in their early 20’s, despite the fact that it’s not the norm, and despite the fact that maybe a lot of Gen Y would actually consider it bizarre to be married at 21 (not because they have a deeply-rooted hatred toward marriage, as Girls would perhaps have you believe, but because 21 is just…young). So at a time when there’s not necessarily pressure to wed and not necessarily pressure to start a family as young, then why the rush? Three young married couples told us their stories.

Aly and Kyle Ekeman met in September 2008. Within two months of their meeting, Kyle formally asked Aly out. They were 15 and 17 at the time – high school sweethearts. “As cliché as it sounds, I fell in love with him instantly,” says Aly. Though only a teenager at the start of high school, Aly had experienced her ups and downs in the world of romance (or lack thereof), and Kyle stood out amidst the rejects and users as someone who was different. “I remember telling myself that I’d finally picked a winner, and I would never let go,” she says.

After only a year, the pair of besotted teens started talking about marriage. But it was always a “someday” kind of conversation. Someday after high school. Someday after being together longer. Someday after really knowing each other.

At 19 years old, Aly found out she was pregnant and the hard fact that they were going to have a child together changed things. But when so many people of that age would run away or fall apart in fear, Aly and Kyle fell further in love. “We always knew we wanted to get married, but Kayleigh helped us kick it into high gear,” says Aly of their daughter.

Of course, there’s no rule that says you have to get married just because you get pregnant, and Aly and Kyle could have waited. They could have seen how the baby changed their relationship before making their official vows. But as Kyle says, “There’s so much to life, why start too late?” Aly and Kyle looked at this pregnancy as a beautiful opportunity and they wanted to be tied in the strongest knot of commitment while navigating it. Aly wanted the same last name as her daughter. And after talking about marriage for so many years, they wanted to do it.

Some Millennials may have concerns about the implications of marriage on their social and personal lives — on their ability to support themselves and grow careers and cultivate relationships and enjoy the freedoms that adulthood can bring. “As long as you have the drive and determination, there is nothing that should stop you from doing what you want to do in life,” says Kyle. “If you let your spouse have personal time and don’t smother them, you won’t miss out on anything.”

Currently, Aly and Kyle are living with his parents in Hopatcong, NJ. Kyle works as a heavy machinery operator and is also the co-owner of a painting business. His income is enough that Aly can work as a stay-at-home mom while they save enough to move out into their own place. Financially, they are pretty lucky — Kyle's parents are willing to help out because they know their son has found the person he wants to spend his life with. A lot of Millennials may not find this living arrangement ideal, but this pair feels lucky to have the help they need to get start their family together.

Hanna and Albert Packer-Someraki are the definition of a Millennial love story. They didn’t meet in Bio 101. They didn’t meet while bar-hopping in SoHo. They met on Instagram. Both Hanna and Albert followed a tattoo appreciation site, and a photo Albert posted of the large tattoo on his stomach caught Hanna's eye so she "followed" his account. “When I realized I’d been followed by a gorgeous Brazilian woman, I had to learn more,” says Albert. “I sent her a message and we ended up talking on the phone afterwards for about four hours.” They were 2000 miles apart at the time.

The pair Skyped and texted and talked over ever medium possible and, shortly after their interaction began, she flew from Utah to N.Y. to visit. They decided that they both wanted something serious, and for Hanna, leaving Utah wasn't an option unless their relationship had a real future. “I basically told him that if I was going to ever move out, it would have to be after he proposed,” says Hanna. “And he told me that he didn’t want some fling, and that he was ready for a family.”

“It’s the most important thing in the world,” says Albert. “I want to be in good health while my children grow to be young adults. I firmly believe that the best years of your life should be spent the person you love.”

Hanna’s ideas on marriage were somewhat traditional to begin with. Raised in a predominantly Mormon state, she was used to people getting married and having kids young. She herself had a son, Elijah, with the boyfriend she dated for three years before meeting Albert. “I spent that entire relationship being manipulated and controlled and really lost myself,” she says. “So being with Albert not only showed me what I had never experienced, but also what I always thought I had deserved.”

Hanna and Albert were married in April of 2013, in a small, private ceremony in New Jersey. "It was something personal that we wanted to do for ourselves until we had the money to have the dream wedding we always wanted. We basically just had that ceremony so that we could be legally married," says Hanna. They live together at their own home in Lanoka Harbor, NJ. Albert works as a Sterile Processing Tech while Hanna is a stay-at-home mom. They are raising Elijah together, and Albert is loving every aspect of step fatherhood.

In keeping with their plans of being young parents, Hanna and Albert are now expecting their first child together. “I think us being young has really given us the ability to enjoy each other and have fun and be silly, and I’m looking forward to growing as a person with him,” says Hanna.

Michelle and Scott Fischer met in North Carolina on Easter 2011 at a party at Michelle's sister's home. Michelle liked him right away and, in teen-rom-com fashion, passed her phone number along to his friends. Though he lived in North Carolina, he contacted her a few days later once she was back at her parents home in New Jersey. “We talked for about a month before I got up the nerve to take a road trip by myself to go see him,” says Michelle. “By the end of the visit, we were dating.”

The courtship moved quickly — within a few weeks, Scott had met her entire family and some friends. Scott got scared at the speed and broke things off, but the split only lasted a few weeks. Michelle went to see him and within hours they were back together. “I can be a little persistent sometimes,” she says.

“When October came, I ended up calling my mom and telling her that I was going to ask Michelle to get married,” says Scott. “We didn’t talk about marriage before; it just kind of happened.” This was seven months after they had met.

“Scott was the man I loved, and he was the best man that had ever happened to me,” says Michelle. “I learned something about relationships and how I should be treated. I learned about myself and what I deserve. Scott was what I deserved.”

Neither Scott nor Michelle were at all preoccupied with waiting – with putting off getting married in order to experience those quintessential 20-something freedoms. “I met the woman I wanted to marry. She is and was everything and more than what I could ask for, so why wait?” When it comes down to it, he just knew. As for Michelle, she says, “I already experienced college life. I knew what it was like to go out and do whatever you want, and not worry about it. I was over it.”

Scott is in the Marines and when the time came to decide on where he would be restationed, they chose Hawaii. Michelle always wanted to be a teacher and since her career was not geographically limited, they elected to decamp to one of the most beautiful places in the country. Michelle has found a teaching job and they’re doing “pretty damn well,” as she would say. But the best part so far? “The love of my life is carrying our first child,” says Scott.

More like this
Who Is Allison Williams Dating After Her Divorce? She’s Engaged With A Child
By Jake Viswanath
The 3 Zodiac Signs Most Likely To Get Married Later In Life
By Kristine Fellizar
4 Zodiac Signs That Will Take Forever To Admit They Like You
By Kristine Fellizar
I Spent 2 Years Trying TikTok’s Dating Advice
By Kailynn Johnson
Get Even More From Bustle — Sign Up For The Newsletter
From hair trends to relationship advice, our daily newsletter has everything you need to sound like a person who’s on TikTok, even if you aren’t.