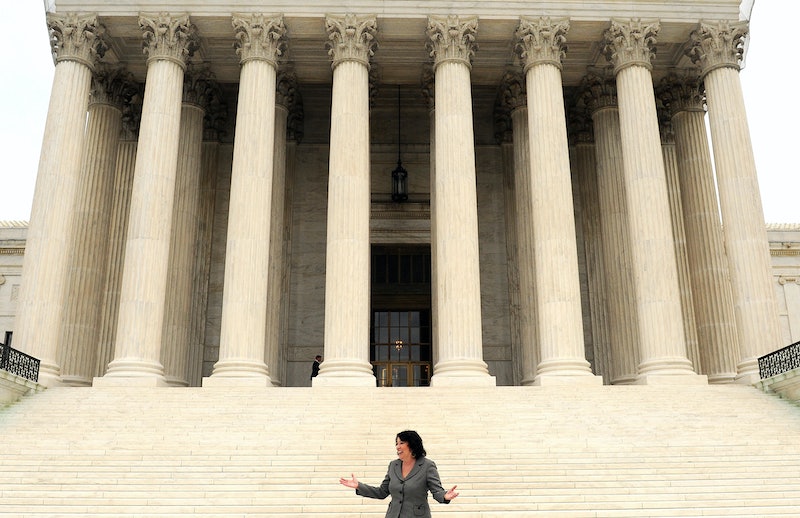 During its next term, the Supreme Court will hear a case that could prove catastrophic to public sector unions if SCOTUS justices take aim at how organized labor traditionally collect dues for its workplace negotiations. In the worst case scenario, the conservative justices will overturn a decades-long precedent that allows unions to collect fees from nonunion members in order to support collective bargaining activities that benefit all workers. The court's decision to hear Friedrichs v. California Teachers Association comes as conservative lawmakers and governors are launching a full-frontal attack on public sector unionization in historic union strongholds like Wisconsin and Illinois. Given the Justice Samuel Alito's scathing critique of the Court’s handling of public sector unions from a similar case last year, the prospect does not look good for government employees in the 25 states that still allow collective bargaining.

While private sector unionization rates have precipitously fallen to single digits over the last couple of decades, public unions remained strong outside of the South, which has never been friendly to organized labor, in large part due to racial concerns. Last year, public sector unionization hovered at 35.7 percent.

But if the plaintiffs are successful in their challenge to “fair share” fees for public sector employees in unionized workspaces, then the Friedrichs case could erode organized labor's strength in states across the country. And seeing that studies have linked strong public sector unions to higher wages, increased political turnout and more progressive public policies, we would do well to keep our eye on how the Court approaches the issue next term.

The Friedrichs case is just one of a slew of judicial heavyweights that the justices will take on next term. Also on the Court’s agenda are challenges to voting rights, affirmative action and abortion. “This is a very significant case. It may well be life or death for the unions,” Harvard Law professor Benjamin Sachs told the Los Angeles Times. “Unions are required to represent everyone. And this could mean nobody has an obligation to pay [union dues].”

The Christian Educators Association International and 10 California teachers brought the case against the state's fair share laws that require all educators to pay union fees to the California Teachers Association, seeing as they are benefiting from the contracts that the CTA negotiated on their behalf.

“I don’t have a voice or vote in the union, and I'm opposed to forced fees and forced unionism,” plaintiff and California teacher Rebecca Friedrichs told the Los Angeles Times last year.

Represented by the Center for Individual Rights, a conservative group out of Washington D.C., the teachers allege that being forced to pay on average $650 a year to the CTA means that they are tacitly endorsing the CTA's activities, including how it represents them in negotiations with local governments. And that sort of coerced or compelled speech is constitutionally problematic under the First Amendment, CIR attorneys claim in legal filings.

The legal challenge does not threaten private sector unions because corporations are not bound by the same constitutional provisions to protect free speech as the government is.

In their arguments, the Friedrichs plaintiffs deploy a rhetorical shift that frames union fees as an invasion of an individual’s right to free speech rather than as a fair contribution to the union’s work to win collective workplace benefits like higher wages.

“This case is about the right of individuals to decide for themselves whether to join and pay dues to an organization that purports to speak on their behalf,” Terry Pell, CIR president, told the Los Angeles Times. “We are seeking the end of compulsory union dues across the nation on the basis of the free-speech rights guaranteed by the 1st Amendment.”

Fair share fees, as they are known as, have historically been a foundational part of how unions support themselves. If unions could only collect fees from their members while still providing all the wage benefits resulting from their collective bargaining efforts to all nonmembers, then employees would have little incentive to join. This "free rider" problem ultimately starves unions of the funds they need to hire expensive negotiators and lawyers to represent workers in crucial discussions with their employers over wages, workplace protections, overtime, healthcare coverage and other benefits.

States that require public employees to pay fair share fees, regardless of their union membership, enjoy higher rates of union density than states with so-called “right to work” laws that block unions from collecting fees from nonmembers. In turn, states with higher union membership tend to have higher wages than their right-to-work counterparts, according to a 2011 study from the Economic Policy Institute.

In contrast, conservatives generally claim that organized labor hurts economic growth and hobbles workers. But as The Washington Post’s Brad Plumer notes, there has not yet emerged definitive evidence that right-to-work schemes hurt or help state economies. While there is evidence that right-to-work states attract more businesses, the extra profits remains centralized with business owners.

For decades, the Supreme Court has upheld that fair share laws as constitutional, drawing off of a 1977 case. In Abood v. Detroit Board of Education, the justices ruled that public employees who were not union members could not be forced to contribute money to a union's political lobbying in support of various candidates or ballot initiatives, but that they could be expected to pay their fair share for the benefits that the union secured on their behalf.

But over the past few years, the Abood precedent protecting public unions has looked less secure. In 2014, Alito signaled that he would be open to a direct challenge to the fair share provision in his opinion in Harris v. Quinn, another case that dealt more narrowly with what sorts of public employees can be required to participate in union funding schemes.

His opinion contained pages of scathing critiques of the Abood ruling, which Alito argued that it stood on shaky foundations. One potent — and telling — line that presaged the teachers’ legal challenge this year:

"Except perhaps in the rarest of circumstances, no person in this country may be compelled to subsidize speech by a third party that he or she does not wish to support," Alito wrote in the majority opinion.

Not so fast, argued Justice Elena Kagan in her Harris dissent. Overturning the Abood case would throw out the institutional basis for "thousands of contracts between unions and governments across the nation."

Law scholar Rick Hasen worried on his blog after the Harris decision came down that Alito's opinion might indicate that the court’s conservative justices have already made their minds up to get rid of the fair shares scheme; they just don’t want to appear to be moving against longstanding precedents too quickly and dramatically.

Instead, they deploy a more moderate approach by issuing opinions that foreshadow a more radical decision down the road. Yet as Hasen notes, “just because the Court takes two or three cases to reach its highly ideological decision doesn’t make it any less ideological or any more comporting with principles of judicial minimalism or respect for precedent.”

Scalia, who wrote in favor of Abood in a 1991 opinion, might prove to be the deciding vote in what is likely to be a partisan and controversial decision next term.

From a legal standpoint, at issue is whether or not Scalia and his colleagues buy the plaintiffs’ arguments that any form of collective bargaining that a union conducts with the government constitutes acts of political speech. Attorneys with the Center for Individual Rights allege that a firm line cannot be drawn between collective bargaining over workplace issues and political speech; after all, pushing for higher wages often means that the state would have to increase its budget or somehow change its budget allocations — thereby bringing the union firmly into the realm of politics.

But union advocates disagree that collective bargaining with government entities is necessarily an act of political speech. California Attorney General Kamala Harris argued in her brief that collective bargaining was not political and that nonunion members are already given avenues by state law to receive refunds or withdraw their support from the union if they disagree with its more overt political activities.

Not to mention, as Scalia himself pointed to during oral arguments last year, that blurring the line between employees bargaining over their work contracts and protected speech would have far-reaching implications for governments' abilities to manage their workforce. Under that reading, ThinkProgress' Ian Millhiser points out, we would have to consider an employee that pushed for a raise to be engaging in political speech, which would mean that his boss’ attempts to shut down his continued pestering would count as a violation of his 1st Amendment rights. That seems like a high burden to place on state governments.

But all this begs the question — why should we care what the Supreme Court decides about fair share provisions and what counts as protected free speech when it comes to public-sector union membership?

As Kagan stated last year, a decision that voids the precedent set in Abood would effectively make the entire country a right-to-work regime where public sector unions would likely struggle to find the members and the funding they need to be effective counterweights to budget-tightening state governments and corporate actors seeking to break the progressive coalition energized in large part by organized labor.

According to one 1998 study by political scientists Benjamin Radcliff and Martin Saiz, unionization rates correlated to greater degrees of progressive public policy, less regressive taxes and greater support for childcare and education.

“Strong labor unions are able to influence public policy, so as to create programs … that benefit everyone in society, not merely organized workers,” Radcliff told Al Jazeera America’s Sean McElwee.